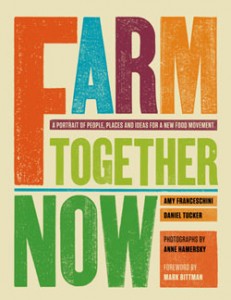 When I first started in the food business there were no rock star chefs. The late 80’s and early 90’s began a trend that created hundreds of almost-literal flash-in-the-pan celebrities and a handful of rightfully idolized geniuses. Today there remains a cult of personality around some chefs and TV cooks, but the attention is finally turning (and rightfully so) toward the farmers, without whom we chefs would be pointlessly clanking a lot of empty pans.

Enter Farm Together Now: A Portrait of People, Places, and Ideas for a New Food Movement (by Amy Franceschini & Daniel Tucker, Chronicle Books 2010). Here we find not rock stars but real people, true agrarians in the old sense of the word who understand that food, farms and fertility actually matter in a post-industrialized world. Twenty in-depth interviews with farmers of all types from across the country, accompanied by the illuminating and personal photography of Anne Hammersky, make for a revealing set of portraits–an album of the evolving American farm.

These are not all retro-hippie back-to-the-landers either, though there are a couple of those. In fact the first farm we visit is that of the Knopik family near Fullerton, Nebraska. Even if you’ve never met one, that image you may have in your minds eye of what a Nebraska farm family would look and sound like is brought to life vivdly as we learn how this family went from pre-chemical farming through the get-big-or-get-out boom and bust cycles to finally arriving on a path toward sustainability.

It has often been said that a good way to make a small fortune in farming is to start with a large fortune. President Kennedy called farming the only business where you buy at retail, sell at wholesale, and pay freight both ways. Yet Franceschini and Tucker bring us many examples of farming that raises people’s income, and their hopes.

The Georgia Citizens Coalition on Hunger, born of community organizing in the mid 70’s, it focuses on urban farms and farmers markets in underserved areas commonly referred to these days as “food deserts.” They built markets in public housing projects in Atlanta in the 90’s that focused on food that was not just locally grown, but economically and culturally appropriate too. Meanwhile Nuestras Raíces, started in 1992, is a coalition of youth groups, churches, probation departments, corporations and more that has built 10 community gardens, a 30-acre farm, and a café in Holyoke, Massachusetts.

In much the same way chefs would be nothing without farmers, farmers would be nothing without seeds, as they are the source of all bounty. In a world where corporate multinationals are succeeding at patenting life forms, Native Seeds/SEARCH is protecting heirloom seeds while supporting the native people of the high desert lands in Arizona and northern Mexico. In Farm Together Now we meet conservation director Suzanne Nelson and learn why protecting the seeds is so vital to life there, and everywhere.

These stories provide a convincing argument for the proposition that there is indeed life beyond chemical and confinement farming, and that the solution to the problems of agriculture lies in many strong hands working together to bring food to their neighbors.

Originally published on Real Food For All