The story below, written by Makenna Goodman, is an excerpt adapted from Growing Roots: The New Generation of Sustainable Farmers, Cooks, and Food Activists, a book by her mother, Katherine Leiner, that explores a sustainable food system through interviews with the movement’s practitioners themselves. 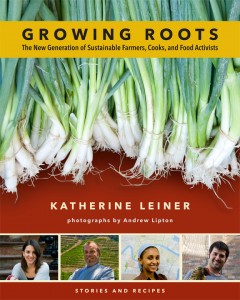 Growing up I had these artsy parents who served “thoughtful” food. At lunchtime I got my avocado and cheese whole-wheat sandwiches out of wax bags, while my friends were getting fun foods like Lunchables.  That’s what I wanted—plastic food. I wanted to be like the rest of the kids–who wouldn’t? I grew up in the woods in Colorado, and while we had a vegetable garden, it was at high altitude and the soil was parched. Then, we moved to New York City. That change was a real shock to my system. For the next seven years, I barely survived science, played on soccer fields covered with syringes and trash, and dreamed about summer when I could go back to Colorado and raft down the Animas River.

In my junior year of high school, I went to the Mountain School where I found my Northeastern wilderness. Environmental science was taught within the context of the outdoors. We each had a little plot of land where we studied the history of the trees and the lay of the land. Within this context, science made a lot more sense to me, as did tending animals. I took care of Murray the ram; I fed him, watered him. I loved the way he smelled. I also took care of the chickens–boy, were they weird. I connected to the land in a deep and personal way.

By the end of college, I decided to go back to New York City. I got a job in the publishing world because I felt obligated to make something of my degree. But I hated working in a cubicle, and I hated midtown Manhattan and those horrible soggy salads. It was a confusing time for me; I felt alienated from everything. Work seemed to be about earning enough money to afford a life which I didn’t want.

So one day, 26 floors above midtown, I walked into my boss’ office—the corner office—and looked at the view of Hoboken. This is what I’m supposed to be working towards? I decided to move to Vermont.

Eventually I moved in with my boyfriend Sam and helped him develop the small piece of land he had bought. I took over the garden, starting the seeds in our sunroom. When those little sprouts started to show, it was like a miracle. Life began to make a lot more sense to me. We increased the amount of animals (sheep, pigs, cows, chickens, hens), and started a maple sugaring operation.

One morning, not so long ago, I heard serious squawking coming from the henhouse. When I climbed out the bedroom window onto our roof, I saw a coyote trotting off with a hen in its jaws. I yelled, “HEY!” The coyote turned back to look at me, and then kept on going. I felt sorry for the hen, but I respected the coyote. I cheered it on. That week, we built the henhouse and started fencing the girls in.

I feel really lucky to have moved onto Sam’s farm. I’ve found mentors, too—many of whom are older than my parents. Without them I’d be lost. I would suggest to anyone who thinks they want to farm, to find someone to apprentice with, team up with an old-timer in your area, help them hay, help them lug lumber, help them shovel some manure. I think it’s really important to be around other people who’ve been farming longer than you have: we all need to start somewhere.

There’s a big difference between growing tomatoes on your balcony and farming acreage. Rural living isn’t easy. It’s no wonder that some farmers’ children move to cities. But for those of us who do choose to move into the rural regions, we have a responsibility to keep it as close to its natural state as possible, to farm with humility (even towards those farmers whose practices we may not agree with), and to keep the tradition of farming alive. In doing so, we support a food system that allows our kids an opportunity to opt out of eating plastic food.

The one thing I know for sure is this: if you’re going to be a farmer, you can’t be afraid to fail. The best advice I ever got was from Joel Salatin, who said exactly that. He told me, do what you like.  If you don’t like to weed, then mulch. Practice permaculture. Start an edible forest garden instead of a traditional French bed garden. If you don’t like chickens, don’t raise chickens. Most important to me, is uniting my life with my work. When the two connect, there’s a possibility for deep happiness.

Food is life, after all.

Makenna Goodman is an associate editor at Chelsea Green Publishing. She lives on a farm in Vermont where she helps to tend chickens, pigs, lambs, and cows. Read more >