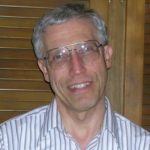 Rick North is the man who put the fight against rBGH on our radar. As the Director of the Campaign for Safe Food Program at Oregon Physicians for Social Responsibility, Rick leads grass roots efforts to discontinue the use of recombinant bovine growth hormone (rBGH or rBST) in cows and to ensure that genetically engineered biopharmaceutical crops do not contaminate the human food supply or environment and speaks on the topic regularly. Rick will retire January 31 so that he can become a full-time volunteer fighting undue corporate influence in our government and other aspects of our lives. He’s very concerned about the corporate take-over of our government and the unlimited funds coming into our election process. After the recent elections, he knew he needed to do something. So, he’s taking it on. With a successful track record of beating Monsanto under his belt, we’re all lucky to have him in the trenches. Go Rick!

I started years ago and it was all kind of by accident. I was volunteering for a church and doing research on how our eating habits affected our health and our environment and how we could help local farmers. I stumbled on information about GE foods and rBGH in particular and I became very concerned.

The strong, well-documented articles I read talked about how most industrialized countries had banned rBGH and how they found that it may cause cancer in humans. Most of my career had been working for the American Cancer Society, so that piqued my interest.

I showed the articles to my wife. She has three sisters each with cancer so she may be at higher risk. She read them and it took us about three seconds to decide not to buy rBGH milk. One thing led to another, I linked up with Oregon PSR and started this program.

The vision is to have a food supply and agricultural system that is safe and sustainable for all people. It is economically viable for farmers and safe for consumers.

A few books I recommend that deal with GMOs are: Jeffrey Smith’s Seeds of Deception; Andy Kimbrell’s Your Right to Know; and an older one, The Food Revolution by John Robbins; Lisa Weasel’s Food Fray; and one from a Mom’s point of view: The Unhealthy Truth by Robyn O’Brien.

In Oregon, my world is PSR (and my wife). Our chief scientific advisor is Martin Donohoe. He’s a physician and has been the main guy right from the start. For rBGH, Michael Hansen is a Ph.D and a senior scientist with Consumers Union. He knows more about rBGH than anybody. And, then there are all the other organizations we work with. I’m also involved with a couple coalitions on GE foods and one that I facilitate is the rBGH Coalition, a nationwide coalition that plans strategies and campaigns.

Ten years ago, I always thought that if the FDA said something was safe, I figured it was safe. Once I got into this, through GE food and investigating, I realized it’s not necessarily true. So, I’m committed to educating the public on the real health and environmental risks of GE food and the industrial meat system. Hopefully enlightening people the way I was enlightened and working with people who are experts in the field. It’s more than education though, it’s motivating people to take action.

The one specific goal we have for rBGH is to discontinue its use anywhere in the country; company by company, persuading them to go rBGH-free. Also having people vote with their dollars and stop buying products that allow it and putting pressure on the companies.

We have a national postcard campaign to Breyers and Dreyer’s ice cream companies, asking them, nicely, to stop using rBGH. They’ve received thousands of postcards asking them to stop, along with thousands of emails. So, this is how we work.

We also work with hospitals and big organizations in the same way. It’s a lot of persuasion; getting people to look at the research so they can make up their minds for themselves. The more people know about rBGH and GMOs in general, the more they avoid them.

We did these postcard and email campaigns with Dannon and Yoplait and they got thousands and thousands of emails and postcards and finally stopped using rBGH. Now, there are virtually no dairies in Washington and Oregon using rBGH. We’ve had a lot of success. We’re at the point now where at least 75% of the milk in the country is rBGH-free, and we’re estimating that 75% of the yogurt is. When we started, 90% were using it. So, it’s been a great team effort.

Take the rBGH efforts, which I facilitate and take the lead on in terms of setting strategies and agendas nationally to discuss it. We have lots of conference calls with the organizations with which we collaborate — collaborations that can number in over a hundred organizations working together toward a goal. Eighty percent of managing anything is clarifying who does what by when. If you can clarify people’s organizational roles, you’ve come a long way. So, we establish those roles and you go out and execute them.

Not all the work is proactive though. A few years ago, Monsanto was going around the states trying to get legislatures to pass a bill or rule that would ban or restrict rBGH-free labeling. They were losing the battle and they thought this would be a good strategy. It caught us by surprise and we spent the better part of two years stopping this in the legislatures and agriculture departments, state-by-state, and we won every one. But a lot of the work we had planned to be proactive had to be put on the back burner for these battles.

We work with a lot of organizations. And, I know how difficult it can be to work with coalitions and this has gone really quite smoothly. It’s not that we always agree with each other on everything. So, the organizations in our coalition, there’s GE Action Network, which is a listerv with different organizations that oppose GMOs. We have a lot of really good exchange of information.

A lot of “projects” are in the courts or regulatory agencies: GE sugar beets, GE alfalfa, GE salmon. And, now ArborGen is threatening to plant GE eucalyptus trees in the southeast U.S. We have our hands full.

The Center for Food Safety has done excellent work in the courts. They work with Earth Justice and there are a lot of lawyers there who have done a great job. Consumers Union and Food and Water Watch are very effective in terms of consumer advocacy and action.. There are so many. Health Care Without Harm has done really well to get hospitals to buy and serve safe and sustainably-produced food. Breast Cancer Action is great. Just about any that I’d name are small with limited budgets and it’s amazing how much we’ve accomplished with very little money; especially when you think of the millions Monsanto has to spend.

Yes, absolutely. We’ve already seen real change. I think what we’re already seeing is a move toward buying more local and organic foods, two promising trends as well as the explosion of farmers markets and CSAs. People are learning more. They know more about their foods than they used to. They are making conscious choices and that’s a really good sign. Some areas of the country are obviously further along than others.

A negative trend though is in the industrial meat system and the worrisome consolidation of the industry, The confined animal feeding lots are just breeding grounds for disease. And, one other serious problem is that companies like Monsanto are buying up smaller independent seed companies. The more they buy them up the fewer choices we all have in terms of our food supply. I can’t think of a worse trend than that.

It’s kind of like the best of times and the worst of times.

A lot is just getting the word out. If people don’t know they can’t act. We can’t stop with education though. It has to be more than that. It is persuading and actively working with people to change their habits; part of that is personal habits and part is institutional. If someone has never contacted a company before, make it easy for them to contact a company. We need to motivate consumers to be more than just consumers; we need to motivate them to make their voices known.

The same I ask for every year on my birthday: vegetarian lasagna, with rBGH-free cheese, obviously, tossed salad, garlic bread and chocolate cake (rBGH-free butter) for dessert.