Antibiotics, one of the world’s greatest medical discoveries, are slowly losing their effectiveness in fighting bacterial infections and the massive use of the drugs in food animals may be the biggest culprit. The growing threat of antibiotic resistance is largely due to the misuse and overuse of antibiotics in both people and animals, which leads to an increase in “super-bacteria.” But people use a much smaller portion of antibiotics sold in this country compared to the amount set aside for food animals.

In fact, according to new data just released by the FDA, of the antibiotics sold in 2009 for both people and food animals almost 80 percent were reserved for livestock and poultry. A huge portion of those antibiotics were never intended to fight bacterial infections, rather producers most likely administered them in continuous low-dosages through feed or water to increase the speed at which their animals grew. And that has many public health experts and scientists troubled.

For years scientists concerned about the threat of antibiotic resistant bacteria in food animal production have been trying to figure out just how much antibiotics producers are using each year. The best they could do was come up with rough estimates. That is because the data were never publicly available, until now.

In accordance with a 2008 amendment to the Animal Drug User Fee Act, for the first time the FDA released last week an annual amount of antimicrobial drugs sold and distributed for use in food animals. The grand total for 2009 is 13.1 million kilograms or 28.8 million pounds. I found the stories covering this revelation interesting, but they did not convey the whole picture. It is important to understand how this amount compares to the total available for people. So, I contacted the FDA for an estimate of the volume of antibiotics sold for human use in 2009. This is what a spokesperson told me:

3.3 million kilograms is a little over 7 million pounds. As far as I can determine, this is the first time the FDA has made data on estimates of human usage public. Below is a breakdown of the FDA numbers prepared by my colleague, Dr. David Love, also from the Johns Hopkins Center for a Livable Future, which compares the estimated amounts of human usage with food animal usage. 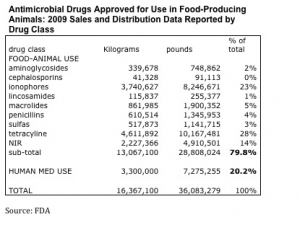 Despite this new information, the hog industry denies the suggestion that it is overusing antibiotics. In response to the FDA’s report, the National Pork Producers Council also pointed out to Food Safety News’ Helena Bottemiller that, “ionophores… are not used in human medicine, they don’t have anything to do with the effectiveness of antibiotics in people.”  That statement is inaccurate. All uses of antibiotics have the potential to decrease the effectiveness of antibiotics in people. Ionophores are no exception. While several industry funded studies determined that ionophore use in animals is “not likely” to transfer resistance from animals to people, researchers couldn’t come to a definitive conclusion because ionophores can lead to bacterial resistance to the antibiotic bacitracin, which is commonly used to treat skin and eye infections.

Every time an antibiotic is used there is a risk of adding to the growing pool of antibiotic resistance. LivableFutureBlog readers might recall an October blog post in which Dr. Ellen Silbergeld, professor of environmental health sciences at the Johns Hopkins Bloomberg School of Public Health, warned that, “Bacteria respond to chemical structures, not brand names, and resistance to one member of a pharmaceutical class results in cross resistance to all other members of the same class.”  Silbergeld says when bacteria develop resistance to one member of that class of antibiotics it can be resistant to all.

So, what is the government doing to ensure we don’t squander the effectiveness of antibiotics for human use on the production of food animals? Since President Barack Obama took office, the FDA says it has taken several steps. Dr. Joshua Sharfstein, Principal Deputy Commissioner of the FDA, took a stand last year by stating that the Administration, “supports ending the use of antibiotics for growth and feed efficiency” in food animals. However, instead of requiring industry take action, the FDA released a draft-guidance last June that essentially asks industry to voluntarily end the use of antibiotics as growth promoters in food animals and include veterinary oversight or consultation on all antibiotic use.

Lawmakers such as Congresswoman Louise Slaughter and Senator Barbara Boxer have been introducing versions of the Preservation of Antibiotics for Medical Treatment Act (PAMTA) for more than a decade that would mandate antibiotic use changes in food animals. Earlier this year it looked like the bill had a good chance of passing, but the bill failed to make it to the floor of the House or Senate. While not perfect, PAMTA would ban the use of medically important antibiotics as growth promoters. Passage of PAMTA would be an important step in saving the potency of antibiotics for human use. However, the current version of the bill could be stronger if it followed more closely the recommendations from the Pew Commission on Industrial Farm Animal Production final report, which calls for a ban on the non-therapeutic use of all antibiotics, not just those considered medically important, in food animals.

Now that we officially know that food animals use an overwhelming majority of our antibiotics, I hope it is more clear to everyone that legislation limiting the overuse and misuse of antibiotics in livestock and poultry must be passed. The next battle, which industry has already begun, is defining what non-therapeutic use will constitute. Producers are already claiming that the use of antibiotics for growth promotion has decreased, maintaining current low-dose usage is aimed at disease prevention. Regardless, all low-dose usage of antibiotics can lead to a significant increase in antibiotic resistance. As Dr. Alexander Fleming, the discoverer of penicillin warned, “It is not difficult to make microbes resistant to penicillin in the laboratory by exposing them to concentrations not sufficient to kill them, and the same thing has occasionally happened in the body.”

Originally published on Center For A Livable Future