Overdue For a Comeback: Rediscovering the Newtown Pippin Apple 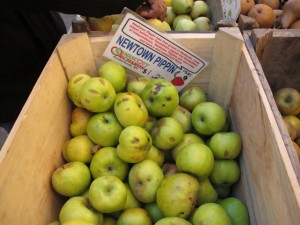 Erik Baard is pedaling fast, but he would be pedaling faster it if it weren’t for the small tree strapped over his shoulder. An urban environmentalist, Baard is often busy delivering, via bike, various types of apple trees to urban farms, community gardens, schools, and places of worship around New York City. The apple that he is currently advocating for is the Newtown Pippin, an apple indigenous to Queens that is on the verge of extinction. Baard and other environmentalists have become increasingly fond of this apple, because of its rusted stem, light green tint, and crisp sweet flavor.

The Newtown Pippin is one of many fruits in the Slow Food Ark of Taste catalog, which includes a list of over 200 endangered U.S. fruits, vegetables, and other foods. Among the listed species are the Mariposa plum from California, the Chiltepin pepper from Arizona, and the pawpaw from North America (though virtually unknown in the U.S.). The catalog was first published about 15 years ago by Slow Food but now has editions in Asian, Europe, and South America. As a result of Slow Food’s work, some varieties have been able to shift from the endangered category to a recovering rare food, like the Rusty Coat apple from Pennsylvania and the Meyer lemon from California.

“When we talk about endangered [food] it’s not that they are falling off the face of the Earth, but that their existence is disappearing because of the industrial food system,” said Edwin Yowell, head of the Slow Food New York chapter. Eighty-five of the foods listed are fruits and vegetables native to particular parts of the U.S., but rarely grown these days. Some of the endangered food on the list have gone extinct in North America, like the Snake In The Shed melon from New Mexico and the Navajo peach from Arizona.

Yowell, who has been working with the Slow Food movement since it was introduced from Italy to the United States in 1999, says the American industrial food system prefers uniformity and aesthetics, and is partially to blame for the loss of many heirloom produce varieties. “A lot of demands today are towards superficial looks. It’s no coincidence that Red Delicious and Granny Smith are popular. It’s dumb, considering we don’t need to design our apple to look as good as it tastes,” said Baard.

Perhaps the Newtown Pippin apple’s atypical design is another reason why Yowell is so intrigued by the fruit.  “You don’t ever want to get to the point where you have one variety,” Yowell said. “It’s biologically not a wise thing to do.”

Biodiversity program manager of Slow Food, Emily Vaughn, said that a lack of biodiversity is a threat to food security. The gene pool that we feed ourselves from, she explains, is becoming shallower, making us less able to defend ourselves against pathogens and climate shift. But Yowell remains optimistic that many endangered varieties are capable of coming back, and ever greater numbers of farmers and gardeners in New York are working towards such a revival. Take Baard: he hand delivers Newton Pippin trees by kayak as well as bike.

“I’m a native of Queens and had never heard of [the apple]” Baard said. The first time he ate a Newtown Pippin, he was impressed by the flavor. But when asked to explain the experience, he said instead, “I’m not going to pretend to be gourmet.” He preferred to quote author Michael Pollan, who described the apple as “delicious, and overdue for a comeback.”

Many Slow Food advocates and farmers insist that re-introducing and eating heirloom and rare varieties of produce is not only better for the environment, but for people’s culinary lives as well. Trina Pilonero, owner of Silver Heights Farm in Callicoon, N.Y, grew up eating seasonal fruit from her parents’ garden. She attributes her taste for seasonal and local food to her upbringing, and says that when she eats produce that’s out of season “it taste like crap.”

For the past two years, Baard has been bringing the Newtown Pippin–popular with Thomas Jefferson and the elite during the Colonial period—back into the modern New Yorker’s diet. Come December when the Newtown Pippin is in season, New Yorkers will be able to buy the apple at most Greenmarkets from distributors like Red Jacket, Samascott, and Locust Grove Orchards.

Chloe Schildhause is a journalist living in New York City currently working towards her MS at Columbia University School of Journalism. Her writing has appeared online for The Bold Italic, Guest of a Guest, Citybeats.info, as well as her blog cloish.tumblr.com where she writes on food, fashion, cults and other oddities. Read more >