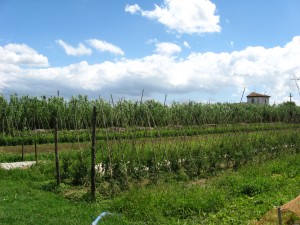 Each of us has a role to play in the food system, whether as producer, consumer, or a cross-breed of the two. For me, knowledge of issues shared by small farmers around the world has educated and motivated me to become active in the California food system, even without firsthand experience in the fields. That was, until I moved to Italy and spent two weeks in the countryside on a farm.

As food of all tastes and textures is now sold in worldwide venues regardless of its origins, the production of food–and its associated idiosyncrasies–follows suit. It’s not difficult to compare the global challenges that unify small, organic growers. A local food system, be in California or Italy, must rely on its ability to generate enough food to fuel a local economy.

The traditional farm remains an authentic ambassador of both the land and the people. Among the hamlets of the Italian countryside, the home of a contadino (an Italian farmer) serves as a cultural representation. It is at one such place that I worked for two weeks in the campi (fields) of the Azienda Agricola Biologica Nico. Originating from a familial business in Tuscany, the farm is now operated by a young couple, Federico Martinelli and Elena Girelli, who while preserving their contadino roots, customize their agricultural practices to a contemporary society.

While the pair has transitioned from conventional to organic farming, they are committing to the land in other ways as well. Through the elementary school curriculum they are developing and the local farmers’ cooperative they are launching, Federico and Elena feed more than just appetites. Their passion and dedication are a driving force, even in the midst of a declining national farming population and a loss of certain cultural customs.

Prior to my time at the Azienda Agricola Biologica Nico, I found myself at Knoll Farms in Northern California. Endeavoring to become acquainted with the local food system, my numerous visits to this produce grower involved a tour, cooking, and inevitably, eating. Rick and Kristie Knoll, my consistently hospitable hosts, have been cultivating their 10-acre agro-ecosystem since 1979. Their products are marketed under the label “Tairwá Produce”, which translates to “essence of the place.” Knoll Farms adheres to the philosophy of quality and ecological farming. These farmers are conscious producers in constant pursuit of agricultural diversity.

Despite my admiration for Knoll Farms, it took a transcontinental journey for me to experience work on a farm. Once I was in Italy, the land, language, and culture separated me from California. But ironically, I did not sense the distance. In fact, the plight of Federico and Elena seemed all too familiar: contention between industrial and small-scale farming, barriers to the disbursement of organic practices, disappearance of a farming legacy. 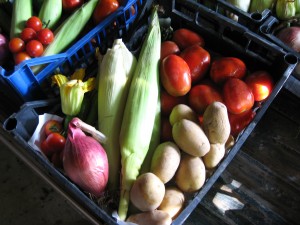 To witness this family renew a daily devotion to farming led me to consider just how relevant and universal the experience of a small farmer is. Time spent beyond California provided exposure to similarities confronted by the international farming community. I am confident that the consequences of my immersion in these two agricultural establishments will last much longer than any future meals I may consume. When I return to the U.S., I will be aware of the practices employed in the growth of my food and the collaborative action I can enact with local producers.

Farms like Knoll Farms and Azienda Agricola Biologica Nico prevail in their cultivation of traditional varieties and sales to nearby localities; the saturation of standardized, mass-produced food does not deter them. Instinctively, they persevere in two diverse lands, bonded by their enrichment of the meals, homes, and minds that they touch.

Gianna Banducci is studying the realm of gastronomy through the Food Culture and Communications Master program at L'Università di Scienze Gastronomiche. She currently lives in the Piemonte region of Northern Italy. Read more >