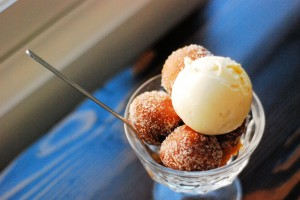 On one of the hottest days of 2010, Santa Cruz, California was blessed with the unveiling of The Penny Ice Creamery, one out of a handful of ice cream shops in the country that are licensed pasteurizers.  Just a few short months later, business partners Kendra Baker and Zachary Davis are seeing their dream realized, a difficult balance to achieve in our current economic climate.  However, despite the financial crisis, or perhaps because of it, they are the first people to admit that much of their success was made possible by Obama’s stimulus plan.  On the heels of the Penny’s now famous YouTube video, thanking the administration for the Recovery Act (which prompted a live call from Vice President Biden), I sat down with the pair to hear directly about the ins and outs of their business.

Your shop is unique in that you pasteurize in house, explain what that means.

KB:  In order to make your ice cream from scratch, you have to pasteurize your base, so that’s kind of the step that most people don’t do.  They buy a pre-made base from a large distributor and they are adding flavor to it. When we were developing this business plan we wanted to have complete control over our recipes and what went into our product. Any time you create an ice cream base it has to be pasteurized, that’s the California Department of Food & Agriculture law.  So we had to create a creamer, which is essentially the micro version of what you would find at a large milk production facility. We had to purchase a pasteurizer that fits our production cycle, which is seven to 15 gallons, because we make everything in really small batches. The process for that is you have to bring up the base to a minimum of 155 degrees with an airspace temperature of five degrees above that.  We have to hold it for 30 minutes after which you draw your product and pull it down to below 40 degrees.  Our production cycle is actually a two day process.  There is a cooling and an aging period, because ice cream is actually enhanced when it is allowed to sit for about 24 hours.  The next day you spin it and then it goes through a hardening period where it needs to go into a deep freezer.  After that we can start to temper it, which is a softening of the ice cream, before we actually serve it.  So it’s a lengthy process.

Do you find that the actual flavor is better when you pasteurize yourself?

KB: The flavor is definitely better and also just having the control.  For example, our mint doesn’t use eggs because I want it to have a more full mint flavor.  The fat of the yolk coats your mouth, which doesn’t allow you to taste as much of that real mint flavor.  So every recipe is unique.

ZD: When you buy a mix you are basically buying 95 percent of your product pre-made. The pre-made bases use a lot more sugar than we do. So with our ice cream what you’ll find is this subtlety that emerges and over the course of eating a cone you can actually finish it without saying, “Oh my god, what did I just do?”  It’s a much friendlier experience overall and you really get to experience the flavors of the ingredients in a more natural way.

What kinds of ingredients are in a pre-made base?

ZD: That’s the thing, you don’t really know. We know where our eggs come from, we know that we are using organic evaporated cane sugar that is minimally processed, we know that our dairy is coming from cows we know.

Why is ingredient sourcing important to you?

ZD: We ultimately decided that we really wanted to make everything from scratch. When it comes to our ingredients, we look at who’s making them, first and foremost.  That’s really better than any label or any certification that somebody’s putting on a product.  If you know them, and you know where they live and where they are operating, then they are accountable.  Luckily, because of where we live, we’re able to have so many local ingredients, which is awesome and we are so thankful for that. Beyond that, there are some things that don’t grow around here like vanilla. Vanilla is a very popular flavor, so then it’s organic or fair trade and comes down to just using the certifications that we feel most comfortable with.

The recent press regarding the stimulus money has certainly drawn attention.  Were you surprised?

KB: As we saw it all coming together, it was really incredible to see how many different people it was affecting.  Zach has a little bit of background in media and so we wrote a script and he pulled out his iPhone and the rest is history…anyone can do it.

ZD: It’s true, anyone can do it.  The most rewarding thing, ultimately, would not be a call from the vice president, although that’s great for business, but if it inspires more people to start businesses and do their dream…that’s the part of the whole economic recovery piece, that’s what it’s going to take. I love this country. I’m a firm believer in the American dream and I want everyone to believe that anything is possible.  It’s not to say it’s not a lot of work.  We put in over two years now, putting this together, just the loan part itself was over six months of extremely frequent back and forth to the bank giving them all the information they needed, proving ourselves.  It’s not like we just said, “Oh, we’re going to go get an SBA loan” and walked into the bank and they gave us the money.  There’s work, it’s all real work.

KB: We had no idea what type of response we would get and we never anticipated that we would actually get a call from the White House…that was pretty incredible.

ZD: But it’s great that they recognize it, that their ears are open enough to have heard it, and it shows that even though we’re on the other coast, that the people in DC are not totally disconnected.

What business elements do you think are key to your initial success?

ZD: We wrote a 75-page business plan, and it wasn’t just filler…just like our ice cream, no filler!  We put a tremendous amount of thought and work into it and as much as it was a business plan to show other people, it was a blueprint for us to work from.  We had plans for how we were going to reach out to people, I think we had a really precise concept of what we wanted to execute and that’s really important.

KB: There’s definitely an ice cream revolution happening that’s nationwide…we’re calling it Third Wave Ice Cream, and I think that we are at the forefront of it.  Making it from scratch is not very common, I only know of a couple other places in the state of California doing it.  Ici does it in some capacity, which is in Berkeley, and then Sweet Rose down in Brentwood.  The pasteurization process and all of the labor and everything that goes into it…it’s definitely a different path in terms of ice cream making; we’re getting back to what used to be.

What is your favorite ice cream flavor?

KB: I have lots of flavors that are high on my list but I think that my most favorite flavor is the fig leaf.  It takes you to a different level.