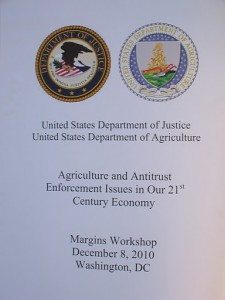 Like any good finale episode, last week’s final USDA/Department of Justice (DOJ) listening session on consolidation in food and agriculture featured recurring themes and a montage of familiar characters from throughout the season, plus a few new twists. Attorney General Eric Holder, Agriculture Secretary Tom Vilsack, and Assistant Attorney General for Antitrust Christine Varney opened the workshop with statements about competition and fairness. Echoing previous sessions, they and the other moderators were joined on panels throughout the day by meat, dairy, and produce industry representatives, economists and antitrust law experts, vegetable and dairy farmers, and poultry growers and ranchers. New to the panels this time were food marketers, grocers’ associations, and consumer groups.

The previous four workshops in the USDA/DOJ investigation examined producer issues, focusing on seeds, poultry, dairy, and livestock in listening sessions in Iowa, Alabama, Wisconsin, and Colorado, respectively. As WhyHunger and our organizing partners have been saying all year, the level of corporate consolidation in food and agriculture affects not only those who produce our food, but also all of us who eat–and so this final workshop on “Margins” was a long-awaited opportunity to bring in the consumer side.

In commerce, the margin is broadly defined as the difference between what the consumer pays and the price the farmer receives. In a direct marketing relationship, the margin includes the cost of production and enough net income for the farmer to live on. In the broader food system, however, where there are many steps between producer and consumer, major corporations control many links in the chain and are often able to set both the buying price for the farmer and the selling price for the consumer–generally with a hefty profit for themselves in between. When the world food crisis was in the headlines in the winter of 2007-2008, for example, the world’s three largest grain producers reported profit increases ranging from 67 percent to 86 percent–in the same period that saw lengthening lines at food pantries and tough times for farmers. Advocates for farmers and consumers alike hope that one outcome of this investigation will be to break up the stranglehold that just a few corporations have on the agricultural marketplace, restoring real competition and allowing producer and consumer to receive and pay the true cost of goods.

Not everyone on the “Industry Dynamics” and “Food Retailing” panels was in agreement with our hoped-for outcome. According to Erik Lieberman of the Food Marketing Institute, competition and choice in retailing are at an all-time high, and Americans’ food landscape has never been better. Referring to a barcode-reading smart phone app he uses, he asserted, “with more technology and more of these apps, we’re going to see even more competition and more transparency. … Consumers [will be] even more aware of food prices.” Mississippi vegetable farmer Ben Burkett countered that in his experience, corporate buyers “know that what we’re growing has a shelf life, [and] use that against us” to manipulate growers into selling for the lowest possible price–a fact that is unlikely to show up in any price-checking iPhone app. Lieberman’s talking points also included statistics about how little Americans spend on food and how much that improves our quality of life–statistics that turn out to be five years old at best and wholly inaccurate at worst, according to follow-up reporting by Shawn Kramer Sisson of Renaissance Cuisine.

Other perspectives on the panels made for some good discussion. Chris Waldrop, director of the Food Policy Institute at Consumer Federation of America, discussed food access and what the food landscape looks like for low-income consumers. Sociologist Mary Hendrickson pointed out the complexities of “consumer welfare” that stretch beyond a narrow focus on price to include consideration of the degree to which one can control one’s life choices and who has power in the food system. Food and Water Watch Executive Director Wenonah Hauter discussed the “illusion of choice” created by hundreds of products made by just a few firms; food engineered with a “formula of sugar, fat, salt that alters the brain’s pathways and compels people to overeat”; and the fact that “at least 60% of consumers don’t have an iPhone with an app on it to compare prices.” 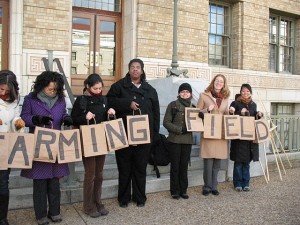 As at the other workshops, there were two public comment periods, with favorite characters reprising their roles from earlier in the year–although, unlike in the other workshops, virtually all speakers argued for strong enforcement of antitrust laws. There were Midwestern dairymen; ranchers in cowboy hats and boots; and soft-spoken Southern poultry growers spurred to speak only to counter a statement by a National Chicken Council representative. They were joined by consumers, nonprofit groups, food justice advocates, students, and concerned citizens from as far as New York and Vermont. They spoke about food safety, climate change, public health, food access, and food sovereignty. In a statement on behalf of WhyHunger, I joined Food Democracy Now!, Food and Water Watch, Farm Aid, and Pesticide Action Network North America to announce a joint delivery of almost 240,000 signatures on petitions requesting that the Department of Justice and USDA take action to level the playing field in food and agriculture.

In the end, it’s hard to know what the outcomes of investigation will be. The presence of industry voices at this workshop was sparse–but it may be that the big corporations don’t need to give testimony during public comment periods because they are part of inside meetings with government officials. However, opposition at the Alabama, Wisconsin, and Fort Collins producer-focused workshops was strongly organized–possibly spurred by seeing the media coverage of the town hall meeting held by small farm and community groups prior to the first workshop in Iowa.  Also, Assistant AG Christine Varney’s recap of the year referenced many of the stories that our allies have told, indicating that DOJ has been listening. One DC-based member of our loose coalition pointed out that by organizing our side so strongly and getting people out to speak, we may have given DOJ political cover to act, even in the face of strong industry opposition. If that’s true, it means that the voices of the people still matter–which is good news as we look towards this series’ spinoff: the 2012 Food and Farm Bill.