How We Became a Kosher Nation | Civil Eats

How We Became a Kosher Nation 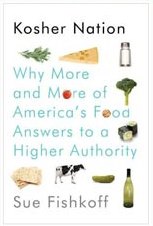 Living in a neighborhood known as “Kosher Canyon,” where nearly every storefront is a kosher restaurant, market, or shop, could make one wonder if anyone outside of this one-mile strip of asphalt in Los Angeles cares about kosher food. A visiting friend recently asked, “Who is this Glatt who seems to own so many businesses in your neighborhood?” Alas, if my friend reads Sue Fishkoff’s latest book, Kosher Nation, she would realize that Glatt is not a person, but a kosher certification standard. There are millions of people across the nation for whom kosher certification is important, and most of them aren’t even Jewish.

The integration of many Jewish cultural rituals and icons extends to our multicultural food landscape. Although the majority of Jews don’t necessarily keep kosher homes, U.S. food companies, from Kraft to Coca-Cola to Nestle, are all rebuilding processing plants, changing recipes, and allowing religious Jews into their factories to receive kosher certification. (And if you want to better understand exactly what it means to keep kosher, Fishkoff offers a detailed explanation that could easily entice or scare someone away). No matter what your faith is, you can easily eat kosher in America now. I’m not referring to the ability to purchase a bagel in North Dakota (albeit topped with ham and cheese) but the increasing availability of commercial foods with kosher certification everywhere, from supermarkets to corner stores, sports stadiums venues, and airlines.

Fishkoff’s book takes us on a journey across the country and around the globe to meet the farmers, manufacturers, and vendors who make these goods readily available. She also introduces us to thousands of religious Jews who travel across the nation and globe (China, Thailand, India–to name a few) to ensure that producers are adhering to strict religious standards. Her sharp, insightful book offers an intimate portrait of the myriad of people involved in the highly complex process of making sure that foods are produced according to strict Jewish laws. Many non-Jews who purchase kosher foods do so because they equate them with higher standards of safety and cleanliness. Others, such as Seventh Day Adventists and Muslims, follow religious dietary codes similar to Jewish ones.

One alarming aspect of the race to certify American foods as kosher which Fishkoff only lightly addresses is the contribution of kosher-certified foods to the industrial food system. Foods might have a kosher seal of approval which means it was made following strict Jewish dietary laws. But, this doesn’t mean that it was made with any consideration for the environment, workers rights, or treatment of animals. And, unfortunately, Fishkoff doesn’t delve enough into this growing question amongst kosher-observant Jews to expand the definition of what is kosher beyond the strict legal definition, to incorporate Jewish values about workers rights, the environment, health, and animal welfare.

Yes, having kosher-processed foods, such as pasta, sauces, soups, canned beans, and vegetables makes life easier. But, many of the foods available to kosher consumers are reflective of the cultural void we have with our food. We are all overwhelmingly eating processed foods high in fat and sugar and low in nutrients, which are making us all fat, even if they’re kosher. While Fishkoff does provide is an intimate portrait of the men who are certifying cookies and candy in China, she never asks them why goods that barely resemble food should be certified kosher.

Fishkoff introduces us to someone who regularly checks lettuce being prepared for bagging at a Dole plant. He’s in the factory for countless hours checking pieces of lettuce to make sure they can receive a kosher seal. Unfortunately, Fishkoff never asks him if he is as concerned with the thousands of Dole farm workers who could use as much support and commitment to protecting their rights as he spends on checking lettuce.

Not overlooked in Fishkoff’s investigation is an example of the breakdown in the kosher-industrial food system: the Agriprocessors scandal. Formerly the nation’s largest kosher meat processing plant, this Iowa-based kosher plant was also the site of the largest INS raid in U.S. history. The incident was a genuine opportunity for observant Jews to self-examine their participation in the industrial food system. Perhaps due to the timing of her book, Fishkoff didn’t include the disappointing reaction by many religious Jews earlier this summer to the trial of the Agriproccesor manager, Sholom Rubashkin (who is a son of the owner). Their outcry of support for Rubashkin, led by ultra-Orthodox Jews, was a strong media campaign to lobby for a reduced sentence for him.

On a better note, Fishkoff does profiles a few Jewish leaders who are opting out of the industrial food system by becoming small farmers raising cattle, growing their own produce, and making their own honey. Their religious life is providing the theological underpinnings for their sustainable work.

America is now a kosher nation. Whether you’re searching for a kosher label or not, you’re eating kosher food. Unfortunately, it’s one more plank to support our industrial food system. I hope that one day “Kosher Nation” will stand for a food system that embodies Jewish values of sustainability, environmental protection, workers rights, and humane treatment of animals.

Sarah Newman is a vegetarian locavore living in Los Angeles where she frequents the 18th street farmers market. She works as a researcher and blogger at Participant Media, producer of Food, Inc. Read more >