Voices from the Young Farmers Conference 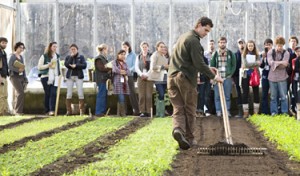 Last week, 240 young farmers and their advocates gathered at Stone Barns Center for Food and Agriculture in Tarrytown, New York to discuss the practicalities and the politics of being a new entrant agriculturist. This year’s event sold out quickly, leaving 100 people on the waiting list–a testament to the growing movement of those curious about or actively pursuing a life growing food to sell directly to the consumer.

In its third year, the Young Farmer’s Conference is a chance for new entrant farmers to make friends, to celebrate the off-season by contra dancing and sipping locally brewed beer, and to make plans for the next year’s big projects.

But it is mostly an opportunity for them to gain knowledge and to brush up on their skills. This year, 62 workshops focused on subjects as varied as “Do-It-Yourself Technology for Farmers,” “Save Lives, Save Animals by Saving Antibiotics,” “Kidding and Lambing: What to Expect When They’re Expecting,” and “Farm to School: Sowing the Seeds for Future Farmers.” There were also hands-on workshops where new entrants learned and sang traditional worksongs while picking carrots, or tried their hand at poultry processing or pig butchery.

“It’s like Hogwarts for young farmers,” said Luke Gran, referring to the Harry Potter book series’ school for wizards. He had come to the conference in order to find new ways to support the 330 new entrant farmer-members of the Practical Farmers of Iowa, where he works as the Next Generation Coordinator.

Gran was not the only one to travel across the country for this event. There were young farmers from as far away as Oklahoma, Washington, Arizona, Maine, Georgia and Ohio–all of whom run small, agro-ecological farming operations. “It’s clear to us that the Young Farmers Conference is serving a national audience,” said Nena Johnson, Public Programs Director at Stone Barns.

In attendance this year were also up-and-coming farmers looking for inspiration, support, and farm work opportunities.

“I never would’ve guessed even four or five years ago that I would be interested in agriculture,” said Susie Yeo, who has volunteered at Queens County Farm and the Brooklyn Grange rooftop farm, both in Queens, N.Y. “I was living and working in New York City, and found the norm of work and life disagreeable to me,” she said.  “Work is a lot more fun when I can snack on delicious, juicy sungold tomatoes or spicy radish sprouts along the way.” Yeo is now looking for an apprenticeship.

In addition, there were also experienced agriculturalists who weave farming into their entrepreneurial work. Originally from the San Francisco Bay Area where she worked as a farmer and food systems educator, Olivia Sargeant moved with friends to Athens, Georgia in 2004 to start Farm 255, a restaurant, event space and farm all in one.

“We wanted to find a way to get good food into people in a [more] conventional, rural environment,” she said. “[It’s] way more fun, exciting, and challenging than sticking [around] in California, where the awareness is already advanced.”

As a panelist in a workshop on models for marketing meat (Farm255 runs a meat CSA), she had come to the conference because she heard it was one of the most useful ones to attend. “I definitely met some people who taught me new things,” she said.

As the workshops have grown in areas of coverage (you could even follow specific tracks this year on marketing and business, livestock, and permaculture, among other subjects), the conference has also been able to leverage the momentum of the movement to bring in big name speakers. This year, Bill and Nicolette Hahn Niman gave an afternoon keynote. But the young farmers seemed most intrigued by the second keynote speaker.

During the social hour leading up to her evening speech, Deputy Secretary of Agriculture Kathleen Merrigan drank beer and ate locally-produced cheeses with the young farmers, and listened to their ideas and stories. Emily Oakley of Three Springs Farm in Oaks, Oklahoma shared her thoughts on giving young farmer’s better credit options so that it is easier to acquire land. In the same way that homeowners in certain special programs get partial debt forgiveness on their down payment after a period of time living in their homes, farmers that stay on their land would, too. Merrigan listened, saying encouragingly, “That sounds like sweat equity.”

“I’m impressed with the young farmers,” Merrigan said during her evening keynote. She called rural out-migration in America “heartbreaking and nation-threatening,” and talked about the USDA’s goal of increasing the number of farmers in the U.S. by 100,000 per year.

She also took time to give advice. “Don’t make the mistake of my generation and get into polarized debates,” she said. “Make sure this movement is as inclusive… as possible.” She went on to say that the time is ripe for real discussion. “There was a time when I’d tell people what I do at a party and I’d be alone with my gin and tonic,” she said, eliciting a laugh.

She gave ample time for questions, saying “You can ask me anything… whether I have a driver, what I had for breakfast, if I’ve met the President.” But the young farmers wasted no time getting down to business. The first question was about land access, and questions followed about industry consolidation and Walmart’s sustainability plan.

Fred Kirshenmann, President of Stone Barns, closed out the conference the following day. He declared that he is not an optimist, because optimism doesn’t imply action.

Instead, he said he was hopeful, and cited examples including co-ops like Shepard’s Grain, where the average age of participating farmers is going down because new entrants see opportunities there. He also mentioned the fact that a state-owned bank in North Dakota is providing low-interest loans to young farmers. He said these models should be replicated elsewhere.

While he had much positive to say about Kathleen Merrigan, his disagreed with her slightly. Speaking about future resource instability, he pointed out that some of the farm systems we see now will someday no longer be viable. “Let’s not encourage the food fight,” he advised. “But let’s not give up on our principles either.”

For all the young farmers who didn’t make it to the conference, audio for the event will eventually be made available on Stone Barns’ website. Audio from last year’s conference can be heard here.