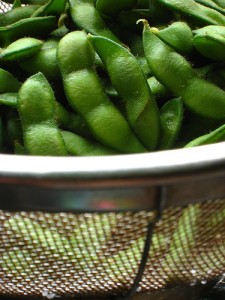 Thanks to Michael Pollan, many Americans are now aware that when a food boasts a health claim it usually means it’s actually not that healthy after all. But there’s one food that consistently flies below the radar despite its numerous health claims when found in processed and packaged foods: Soy. A long-time staple in the American health food repertoire, it is a prominent example of Pollan’s observation. And the research is mounting that soy foods are not only questionable in terms of their benefits, but in fact, may be hazardous to your health.

Most recently, the Cornucopia Institute conducted research on the processing of soy foods and found that the industry commonly uses hexane—a petroleum-based solvent and known neurotoxin—to process soy ingredients found in many “natural” food products.

Thanks to their research and consumer concern, the Cornucopia Institute announced last week that some companies have voluntarily changed their processing practices and eliminated hexane from their products. Unfortunately, there are still well over two dozen “all-natural” nutrition bars and veggie burgers that still use hexane to process soy.

But hexane processing is really just the tip of the iceberg when it comes to problems associated with eating soy—and many of the health problems are unknown to the general public.

In 1999, the FDA approved the health claim that soy is “heart healthy” and reduces the risk of cardiovascular disease. But this wasn’t without controversy. Two researchers for the FDA, Daniel Doerge and Daniel Sheehan stated that they were opposed to the labeling of foods containing soy as heart healthy since there was “abundant evidence that some of the isoflavones found in soy…demonstrate toxicity in estrogen sensitive tissues and in the thyroid.”

The two researchers refer to numerous studies that show the estrogenic quality of soy isoflavones have harmful effects on many in the population. Isoflavones are a type of phytoestrogen, or plant-based estrogen that mimics human estrogen. It functions similarly to other endocrine disruptors (which I wrote about here on Civil Eats) and binds to our estrogen receptors. Consuming soy elevates estrogen levels, which is correlated with increased risk for breast cancer (and other estrogen-sensitive cancers as well), as 80 percent of U.S. breast cancers are associated with estrogen supplementation. In one study reported in the American Journal of Clinical Nutrition, women who already had breast tumors were given a soy drink for 14 days and their breast tumor growth increased significantly.

In another study the researchers for the FDA refer to, consumption of soy is linked to brain aging, shrinking, and the development of Alzheimer’s disease. In this 35-year Hawaiian study of 8,900 Japanese men and 500 of their wives, tofu intake was the only factor that correlated with an increased occurrence of Alzheimer’s disease. The researchers wrote, “This finding is consistent with the environmental causation suggested from the earlier analysis, and provides evidence that soy (tofu) phytoestrogens causes vascular dementia.”

Perhaps most alarming is the use of soy-based infant formulas. They pose such a risk that the health ministers of the United Kingdom and New Zealand have advised parents not to use soy formula. Studies have found that soy-fed infants have estrogen levels an average of seventeen thousand times higher than infants fed human or cow’s milk.

For men, estrogen-rich soy is also problematic. The Israeli Health Ministry warns men to exercise caution in regards to soy consumption as it has been shown to lower virility—since eating soy reduces testosterone and increases estrogen. In one study presented at the 2007 conference of the American Society of Reproductive Medicine, researchers found that in subfertile men, those eating the most soy had forty-one million fewer sperm per milliliter than those who consumed none. The average amount consumed was equivalent to half a tofu patty. In the womb, excess estrogen causes abnormal sexual development and low sperm counts in boys and men.

As is clear from these studies, the phytoestrogens in soy are quite powerful. While other foods (flaxseed, garbanzo beans, and oats, for example) also contain some amount of phytoestrogens, soy contains the highest amount—and since it is often used in such large quantities as a replacement for meat or dairy, it’s more problematic than other foods. Proponents of soy often refer to the long history of its use in Asian cultures but they fail to mention just how much is typically eaten. In Japan the average amount of soy consumed on a daily basis is two tablespoons, in China it’s two teaspoons where it’s eaten as a condiment rather than a replacement for animal products.

In America however, since soy is in thousands of processed foods (usually in the form of soy protein isolate, soy isoflavones, textured vegetable protein, and soy oils) it accounts for a fifth of the calories in the American diet—not to mention the actual soy foods and drinks that some use as a replacement for meat or dairy. Soy isoflavones were actually denied status as “generally regarded as safe,” or GRAS, as a food additive by the FDA due to the many uncertainties surrounding them. A senior scientist for the FDA wrote, “Confidence that soy products are safe is clearly based more on belief than hard data.”

Fermented soy (miso, natto, tempeh, and soy sauce), most commonly eaten in Asian cultures, is easier to digest and contains far less phytic acid. In addition to choosing fermented soy products over others, choosing organic soy products means avoiding the 91 percent of soybeans produced in this country that are genetically modified and highly contaminated with pesticides.

Why haven’t you heard many of these facts and figures when it comes to “heart healthy” soy? Soy production is a major player in the industrial food system. According to the USDA, in 2009 the total acreage of soybeans planted in the U.S. was 77.5 million acres, accounting for the largest source of protein feed and the second largest source of vegetable oil in the world. In 2008-09, the farm value of soybean production was $29.6 billion, the second highest among U.S. produced crops.

So let’s remember Pollan’s decree: “a health claim on a food product is a good indication that it’s not really food, and food is what you want to eat.” And in fact, this applies to nearly every health claim, even the ones that you might not suspect. It’s good to note, too, that when the food in question is one of the largest players in the industrial food system, you can bet we’re not getting the whole story.