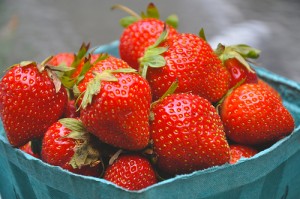 Outrage summarized the reaction of the environmental, public health and organic farming communities around California last week, when the state’s Department of Pesticide Regulation (DPR) announced its approval of methyl iodide for use in strawberry production.

The EPA approved methyl iodide in 2007, and the chemical is currently in use across the southeastern United States. But California, New York and Washington all have state-specific procedures for registering new chemicals. While Washington and New York have banned methyl iodide, California has, for now at least, chosen to follow the EPA’s lead.

DPR director Mary-Ann Warmerdam hails the pesticide as an effective alternative to methyl bromide, which is being phased out as part of the Montreal Protocol on climate change. Critics of methyl iodide counter that the new chemical is a boon only to its producer (Arysta LifeScience). The Pesticide Action Network of North America (PANNA) expressed that this was a triumph of corporate lobbying pressure over scientific research and public sentiment:

Crumbling under chemical industry pressure, including an intensive pro-methyl-iodide lobbying and communications campaign run by Arysta LifeScience—methyl iodide manufacturer and the largest privately held pesticide company in the world, the state of California has shunned the findings of top scientists who have consistently said that the chemical is too dangerous to be used in agriculture. Arysta LifeScience pushed to secure registration of the pesticide in California because it is one of the most lucrative pesticide markets in the nation.

The issue of whether or not to ban methyl iodide has pit the interests of a biotech corporation against scientists, farmworkers, consumers and public health activists. As Paul S. Towers of Pesticide Watch put it, “It’s clear that corporate bullying has made a mockery of a process that is supposed to be based on science.”

At the Scientific Review hearing in Sacramento last June, scientists John Froines, Katherine Hammond and Ed Loechler all testified that methyl iodide is both too dangerous and too new to make its use in agriculture safe. Health risks include early miscarriage, cancer and permanent nerve damage for those working with the toxin as well as those living or working within a half-mile of treated fields. Susan Kegley of PANNA said that scientific consensus about these risks has been “completely unanimous except among the chemists who own the patent.” It is important to note that methyl iodide will be applied to the soil and not directly to plants and, hence, does not pose an immediate health risk to consumers. However, residual iodide could accumulate in the soil over time, contaminating both groundwater and crops–risks that have not yet been evaluated.

NRDC scientist Gina Solomon characterized the depiction of methyl iodide as a methyl bromide alternative to be misleading: “Methyl iodide is a gas that will be injected into the soil to kill all living things. As a gas, it’s not likely to stay in the soil despite tarps intended to keep it down. [. . .] The quantities that escape are expected to be high enough to result in significant risks of neurological damage, cancer, and fetal toxicity.” An editorial in the Fresno Bee echoed Solomon: “Why replace one toxic, ozone-depleting pesticide with another chemical that while not damaging to the ozone is even more toxic?” The DPR continues to claim that their regulations will safeguard against the chemical’s risks. But, when asked at the June hearing about both pesticide drift and noncompliance, Warmerdam dismissed such concerns and implied that any negative impacts would be the fault of individual farmers and farmworkers.

Sustainable agriculture experts argue that safe alternatives already exist to methyl bromide. A number of techniques have proven effective in managing strawberry pests, including crop rotation, steam treatments, biofumigation with mustard or broccoli (crops that release natural pesticides in the decomposition process) and a new technique from UC Santa Cruz called anaerobic soil disinfestation. (The California Strawberry Commission has also been funding research into such practices.)

Since last spring when the DPR first announced its plans–against the recommendation of its own scientists–to approve methyl iodide, over 53,000 people have submitted comments expressing opposition. The issue appears to be uniting otherwise disparate communities in California, a coalition that has no plans to cease and desist. PANNA, Pesticide Watch, Work Safe California, the California Rural Legal Assistance Foundation, Credo Action, the NRDC and other groups are coordinating legal and political action. As evidence of these efforts, Credo launched a petition over the weekend calling on Governor-Elect Brown to reverse the DPR decision by exercising his power to issue a moratorium on the chemical and reconvene the scientific review committee. Concerned citizens also can put pressure on their local agriculture commissioners, who will be tasked with issuing permits for the use of methyl iodide at the county level.

Methyl iodide is shaping up to be a lightning rod issue for California, a state that seems to be at a political crossroads. For opponents of methyl iodide, that crossroads might be summed up as a long view of the common good, on the one hand, and the economic interests of corporations like Arysta, on the other. While the state’s multi-billion-dollar strawberry industry certainly needs an alternative to methyl bromide, this challenge offers an opportunity to transform the industry into one that is more, rather than less, sustainable and socially just.