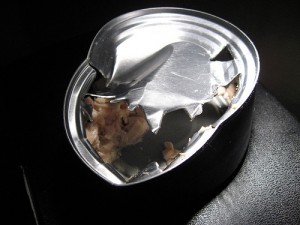 Consumer Reports’ latest tests of 42 samples from cans and pouches of tuna bought primarily in the New York metropolitan area and online confirm that white (albacore) tuna usually contains far more mercury than light tuna. According to Consumers Union, pregnant women should avoid tuna and younger women and kids should limit their consumption.

“Canned tuna, especially white, tends to be high in mercury, and younger women and children should limit how much they eat. As a precaution, pregnant women should avoid tuna entirely,” said Dr. Urvashi Rangan, Director of Technical Policy, at Consumers Union, nonprofit publisher of Consumer Reports.

The Food and Drug Administration (FDA) and the Environmental Protection Agency (EPA) advise that women of childbearing age and young children may eat up to 12 ounces a week of light tuna or other “low in mercury” seafood, including, within that limit, up to 6 ounces per week of white tuna.

Consumer Reports’ tests, conducted at an outside lab, found:

• Every sample contained measurable levels of mercury, ranging from 0.018 to 0.774 parts per million (ppm). The FDA can take legal action to pull products containing 1 ppm or more from the market. (It never has, according to an FDA spokesman.)
• Samples of white tuna had 0.217 to 0.774 ppm of mercury and averaged 0.427 ppm. By eating 2.5 ounces (about half a can) of any of the tested samples, a woman of childbearing age would exceed the daily mercury intake that EPA considers safe.
• Samples of light tuna had 0.018 to 0.176 ppm and averaged 0.071 ppm. At that average, a woman of childbearing age eating 2.5 ounces would get less than the EPA’s limit, but for about half the tested samples, eating 5 ounces (about one can) would exceed the limit.

In 2006, Consumer Reports scrutinized [PDF] the results of the FDA’s tests in 2002 to 2004 of mercury levels in hundreds of samples of canned tuna. The agency’s white-tuna samples averaged 0.353 ppm; light tuna, 0.118 ppm. But Consumer Reports found that as much as six percent of the FDA’s light-tuna samples had at least as much mercury as the average in white tuna—in some cases more than twice as much.

Given the uncertainties about the impact of occasional fetal exposure to such high levels, Consumer Reports urged the FDA to warn consumers about occasional spikes in mercury levels in canned light tuna. More than four years later, the FDA still hasn’t issued such a warning. When asked why by Consumers Union, an FDA spokesman indicated to the group that the agency had already taken the spikes into account when formulating its mercury advice.

“The FDA should strengthen its current guidance and advise pregnant women to avoid tuna altogether, especially given the uncertainties about the impact of occasional fetal exposure to high mercury levels,” said Jean Halloran, Director of Food Policy Initiatives at Consumers Union. “The FDA should also continue to test for mercury across the spectrum of fish and seafood in the marketplace in order to provide consumers with adequate information on the mercury levels of all fish.”

Halloran noted that there may well be other species that vulnerable groups like pregnant women should avoid, but the FDA needs to conduct more testing to draw conclusions. “The last set of FDA data gathered from 2002-2004 and published in 2006 needs to be updated and the sample size of many species should be increased,” she said.

Heavy metal accumulates in tuna and other fish in an especially toxic form, methylmercury, which comes from mercury released by coal-fired power plants and other industrial or natural sources. According to Consumers Union, some studies have linked even low-level mercury exposure in pregnant women and young children to subtle impairments in hearing, hand-eye coordination, and learning ability. Other evidence [PDF] suggests that frequent consumption of high-mercury fish might affect adults’ neurologic, cardiovascular, and immune systems. The body is slow to eliminate mercury so it can accumulate in people over time.

Fish are rich in protein, vitamin D, and omega-3 fatty acids. Studies have shown that omega-3s reduce the risk of heart attack and stroke and might also elevate mood and help prevent certain cancers, cognitive decline, and certain eye diseases. During pregnancy, omega-3s might help in developing the fetus’s brain and visual system.

“Fortunately, it’s easy to choose lower-mercury fish that are also rich in healthful omega-3 fatty acids,” Dr. Rangan said. “That’s especially important for women who are pregnant or might become pregnant, nursing mothers, and young children, because fetuses and youngsters are still developing their nervous systems and are therefore at particular risk from methylmercury’s neurotoxic effects.”

So what kind of seafood is safe to eat? According to Rangan, popular seafood, including clams, Alaskan salmon, shrimp, and tilapia, contain relatively little mercury and are better choices. Other lower-mercury choices include: oysters, pollock, sardines, Pacific flounder and sole, herring, mullet, and scallops (with some limitations for women of child-bearing age and children).

The story appears in the January 2011 issue of Consumer Reports and is also available free online.