Looking Back at a Year of Ag Industry Consolidation Workshops, Ahead of Finale This Week | Civil Eats

Looking Back at a Year of Ag Industry Consolidation Workshops, Ahead of Finale This Week 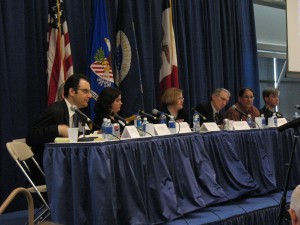 Over the last year, in towns around the country, thousands of farmers, ranchers, and concerned citizens have packed auditoriums to overflow capacity–not for a rock concert or even a farm auction, but for the leaders of the Department of Justice (DOJ) and the USDA. The departments have been on a listening tour, taking them from Iowa to Alabama and Wisconsin to Colorado, to hear from food producers about how corporate consolidation in food and agriculture markets has affected their livelihoods. Next stop? Washington, DC, this Wednesday, December 8.

The listening sessions–or workshops, as they’re officially called–are part of a year-long investigation by the Departments on “Agriculture and Antitrust Enforcement in the 21st Century“–which is to say that the DOJ and USDA are finally examining corporate concentration in our food system. Given the numbers, the investigation may be overdue: Right now, the top four companies control 85 percent of the nation’s beef, 70 percent of pork, and 60 percent of the nation’s poultry. Three corporations process over 70 percent of the nation’s soy. Just one company controls 40 percent of our milk supply, and Monsanto holds patents on 80 percent of corn seed. Our food system has become one of the least competitive sectors of the marketplace–to an extent that Attorney General Eric Holder has called the issue “a national security matter.”

Holder and his USDA counterpart, Secretary of Agriculture Tom Vilsack, have heard a wide range of views at the workshops, which have each focused on a particular production sector (seeds in Iowa, poultry in Alabama, dairy in Wisconsin, and livestock in Colorado). Panelists have included grain and dairy farmer members of the National Family Farm Coalition and Family Farm Defenders, small-scale ranchers with the independent cattlemen’s union R-CALF, researchers from Food & Water Watch, and members of the United Food and Commercial Workers Union, all asking for greater enforcement of antitrust laws. On the other side, representatives from Monsanto, Consolidated Beef Producers, International Dairy Foods Association, a professor who holds the Pioneer [Seed Company] Chair in Agribusiness at Iowa State University, and operators of massive feedlots have mostly defended the status quo.

From the latter group–as well as from most of the government representatives–there has been a lot of seductive rhetoric about the need for large-scale, industrial agriculture to feed a growing world population, and references to local and organic agriculture as a niche market. Other than statements by a couple of the small farmer panelists and during the public comment period, there has been little reference to the difficulties that independent farmers are having feeding themselves, or the fact that industrial agriculture hasn’t helped the one billion people worldwide who are currently suffering from chronic hunger. There has also been almost no mention of international research showing that to feed a growing population, we need much greater investment in local markets, local control of seeds and growing methods, and access to land. Studies like the UN- and World Bank-sponsored International Assessment of Agricultural Knowledge, Science, and Technology for Development (IAASTD), indicate that we should invest in sustainable agriculture so that it can grow beyond a niche market–and that we must break up the monopolies that control agricultural markets and make it impossible for newcomers to compete.

It was only in town hall forums the night before the official workshops in Iowa, Wisconsin, and Colorado that the urgency of the situation became clear. Across the country, the stories have been the same: grain prices so low they don’t cover the cost of inputs. Milk prices so low they don’t cover feed costs. Non-genetically modified seed harder and harder for organic farmers to find. Families forced to sell their farms after generations on the land. Former farmers struggling with debt and unable to find work because they have no off-farm skills. Low-income consumers–urban and rural–with no access to fresh food.

The stories of hardship from across the nation have also pointed to a more hopeful underlying theme: solidarity. At the town hall before the first workshop, in Ankeny, IA, a family farmer from near Des Moines talked about power: “Industry cannot turn one wheel unless people make those machines work,” he said. “We have the power here, and we need to understand what that power means.” Months later, prior to the fourth workshop, in Fort Collins, CO, a labor leader talked about being in a moment of “worker and farmer cooperation like this country has never seen before.”

In Iowa, the crowd chanting “bust up big ag!” was full of white farmers in their 50s wearing feed caps and faded jeans. In Colorado, it was ranchers in cowboy hats, pressed checked shirts, and big belt buckles who were on their feet calling for change. Around the country this year, it has been almost quarter of a million citizens who have signed petitions calling on DOJ and USDA to take swift action in this investigation. Similarly, in Brooklyn, New York last month, it was a diverse crowd of hundreds of mostly African-American urban and rural farmers strategizing and organizing at the first Black Farmers and Urban Gardeners Conference–just as in cities and small towns around the country, communities of all colors, ages, and experiences are joining together to create a more just and fair food system. The anger and powerlessness voiced at the town hall forums could have been spoken by any of these communities–as could the commitment to organizing and demands for change.

Like the DOJ and USDA, I’ve traveled the country this year listening to producers and consumers tell of their experiences with the corporate-controlled food system. They, of course, have also gathered a great deal of information that I have not (including reading all 15,000+ comments that have been submitted on the issue). But they haven’t been at the town hall forums, hearing the themes of both suffering and solidarity echoing loudly in a way that is harder to hear in the official workshops, which have “balanced” panelists and long speeches. (With the exception of the Colorado workshop, whose almost 2,000 cowboys created moments of raucous free-for-all, to the dismay of DOJ.) My takeaway from this year’s investigation has been the extraordinary number and diversity of Americans being screwed by our food system, and the strength and consistency of the movement for change, particularly in the most unlikely places.

The final workshop is in Washington, DC, this Wednesday, December 8. It will focus on price margins (broadly: the difference between what the consumer pays and the producer receives)–making it the only one of the workshops to address the consumer side. After that—after a full year of investigation—the Departments have given little indication of what will happen. For thousands of people who have spoken out in and around the workshops, and millions more they represent, lives and livelihoods depend on DOJ deciding to take strong action to enforce existing antitrust laws and recommend new ones that would go even further to restoring fairness in food and agriculture markets. Let’s hope they’ve heard the movement.

You can keep showing DOJ the strength of the movement in support of strong action resulting from this investigation–if you’re near DC, come to the workshop on December 8, and to the community forum [PDF] on December 7. Or send a comment directly to DOJ. You can follow me at Wednesday’s workshop on Twitter @whyhunger and #USDADOJ.