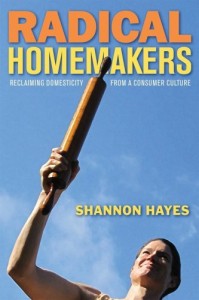 More than any other book I’ve read in recent years, Shannon Hayes’ Radical Homemakers has forced me to examine my life choices and question my assumptions about career and consumer culture. In an era of unprecedented economic turmoil, climate change, and damaged ecology, most of us feel a sense of urgency about the need to effect fundamental and radical change in our lives. Hayes believes that this process begins in the most local place of all: the home. And she’s provided case studies of individuals–the radical homemakers in the title–who are making the kinds of changes we all need to make, describing the processes they are going through, and profiling their work to reclaim the art of domesticity while living in the midst of a consumer culture.

Radical Homemakers is compelling, convincing…and unsettling. What I imagined to be a book describing the choices of people I couldn’t relate to instead became a highly relevant and on-target commentary on home, food, feminism (although radical homemakers include among their number both women and men), and what it means to live in what Hayes terms an “extractive economy.”

Hayes’ definition of an extractive economy (“where corporate wealth was regarded as the foundation of economic health, where mining our earth’s resources and exploiting our international neighbors was accepted as simply the cost of doing business”) very accurately describes the sort of globalized and industrialized economy that seems to be at the root of much of what plagues modern society. Hayes writes instead about people who are embracing the idea of what she terms a “life-serving economy” that values families, communities, social justice and a healthy planet.

The seven-chapter book is divided into two major sections. In the first four chapters, Hayes provides context, including laying out the tenets that radical homemakers subscribe to: ecological sustainability, social justice, family and community. Hayes does an excellent job of positioning today’s reality within the context of history–including first and second wave feminism, the work of Betty Friedan, woman’s (i.e., the domestic) sphere, and the industrial revolution–and also describing the process by which households shifted from being units of production to units of consumption. She weaves past and present together, providing an understanding of how we got where we are today, and how eighteen individuals she surveyed for her book have gotten to a different place, an alternate destination we might all be well served to visit.

It is in the second part of the book that we meet these radical homemakers. Hayes describes them individually and collectively. She notes that not one of those she surveyed had all the skills required to embrace radical homemaking, but that each was a “wizard” at nurturing relationships that could help support their efforts to reclaim domestic skills and move towards a “homegrown” culture. Hayes also points out that radical homemakers share characteristics, including being community-oriented, lifelong learners, embracing homes as “living systems,” and in being fearless as they transitioned from the notion of an extractive economic model to a life-serving economic model. There was also a notion that success could be gauged not by how much was earned, but by how much wasn’t spent. Talk about a paradigm shift!

Per Hayes, radical homemakers go through a similar process that includes three stages: renouncing, reclaiming and rebuilding. While the work begins at home, many radical homemakers develop social capital and move into larger, more community-based efforts.

Her work offers a compelling message for those engaged in the Good Food movement, and for anyone who is feeling angst in the current economic climate. Larger-than-life questions loom: What about the current inequality of wealth in our nation and the world? What’s the economy really for? Must we believe that the viability of the corporate world is integral to social and individual progress? In an age where corporate greed and irresponsibility have left highly visible human and environmental wreckage in its wake, Hayes believes these are the questions we should be grappling with.

Hayes also asks us to examine what participating in an extractive economy costs us. Certainly our time. And maybe, in many cases, it results in a loss of community. How do we challenge strongly ingrained beliefs about what constitute wealth and poverty? Success or failure? What is really essential, and how can we reclaim the domestic skills that have been devalued and, in many cases, lost? If we answered these questions, we might be forced to embrace a different reality, pursue different educational and career paths, and in the process, perhaps create a new (and truly braver) world.

Hayes shares a message of persistence, hope, renewal and resistance to the current situation we find ourselves in. I’ve had an opportunity speak with her twice now, and I find that she herself is a radical homemaker who is deeply committed to the tenets and practices of the movement. (And it is a movement…I’ve got radical homemakers on my radar now, and they are emerging everywhere, from my packed knitting class to the dozens of messages left on our office voicemail requesting assistance with gardening and home food preservation efforts).

If you read this book–and I highly recommend it–be prepared to be challenged. The book asks hard questions, but also provides some lovely answers.