Budgeting For Change: Five School Lunches for Under $2 | Civil Eats

Budgeting For Change: Five School Lunches for Under $2 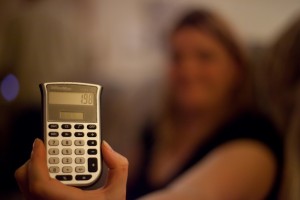 We all want our kids to be healthy. In the midst of hectic lives, we try our best. Sometimes, we have good days—an astounding victory for spinach, squash, and sparkling teeth. On bad days, convenience trumps health and teeth stay fuzzy. Such is life. But good or bad, there’s one thing I do every day: make my daughter Helen’s lunch.

When I discovered that my daughter’s school spent $1.98 per lunch (that’s not including labor, folks), I was flabbergasted. I’m not really one for budgets; I’m also not a coupon-clipping supermarket genius. But I knew I could do better. In lean times, knowing farmers and cooking from scratch kept healthy food on our table. 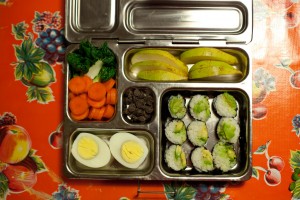 For one week in November, I set out with a budget in mind. I challenged myself to shop only at the farmer’s market and Whole Foods, to reach the price point of Helen’s lunch program. If I could make healthy meals at high-end retail, there is a good argument that with wholesale prices, schools could do it even better.

My week’s worth of menus:

I‘ve learned a few things worth sharing from my school lunch challenge:

1. A simple look at my food bill destroys the myth that schools can’t afford good food. If I could do it at Whole Foods prices, anyone with a club card can kill the $2 lunch challenge. The big argument that remains is that made-from-scratch foods are too labor-intensive. People need to be trained to cook, and trained people get paid better. But I believe that many people would trade their unwrap-heat-serve routine for the chance to create real food for kids they care about. And for us parents? We can’t keep brown bagging it while waiting for the world to change. It’s time to get involved, and it’s time to get vocal.

2. Even the most conscientious farmers have food waste. The deals I got at the end of the farmer’s market were rock bottom cheap. Schools should capitalize on this “waste” by setting up direct relationships with local farms to take their seconds. Veggies headed for the compost pile and LUTG (looks ugly, tastes great!) fruit could make a monumental difference in the volume of produce schools could afford.

3. Food marketing companies have absolutely convinced us that our kids “need choice.” In the lunch line, a child chooses her main dish, side dish, fruit, and—if she’s in one of the worst districts—the option to forego these selections altogether and load up on chips, candy, and Gatorade. But what if we gave kids one meal? Could we foster the same sense of togetherness and community at lunchtime that we want to see at the family table? What would that look like? It certainly wouldn’t be the card-swiping junk fest that the food marketers want us to believe is our birthright as American consumers.

4. Switching from contract to independent food service is also a way for schools to break the “good sales, cheap food” cycle and improve quality without increasing the price point. I was privileged to watch that transition underway at Santa Clara Unified School District, a massive district of 14,000 kids (46 percent of whom get a free lunch), that went independent about six years ago. When we were working to get Full Circle Farm’s produce into the lunch program, we were seeing amazing changes take place: kitchens were retrofitted; chefs were hired; produce wholesalers were contracted. I’m not saying it was easy. But when that first truck full of watermelons and tomatoes went over to the district’s central warehouse, I got goosebumps. We had grown this good food, and now it would feed kids who needed it.

5. Kids who have a tangible, emotional bond to healthy food want to eat it regularly. Whether they harvest a head of broccoli in the garden or make fresh tortillas in the kitchen, let students be “Chef for a Day.” Getting kids into the act of making school lunches—putting them in charge of the process of creating their own food for themselves and their classmates—is a powerful recipe. We can change kids’ relationship with food with just a patch of dirt, or nine cents worth of corn flour.