Cooking With Kids on Thanksgiving (Recipes) 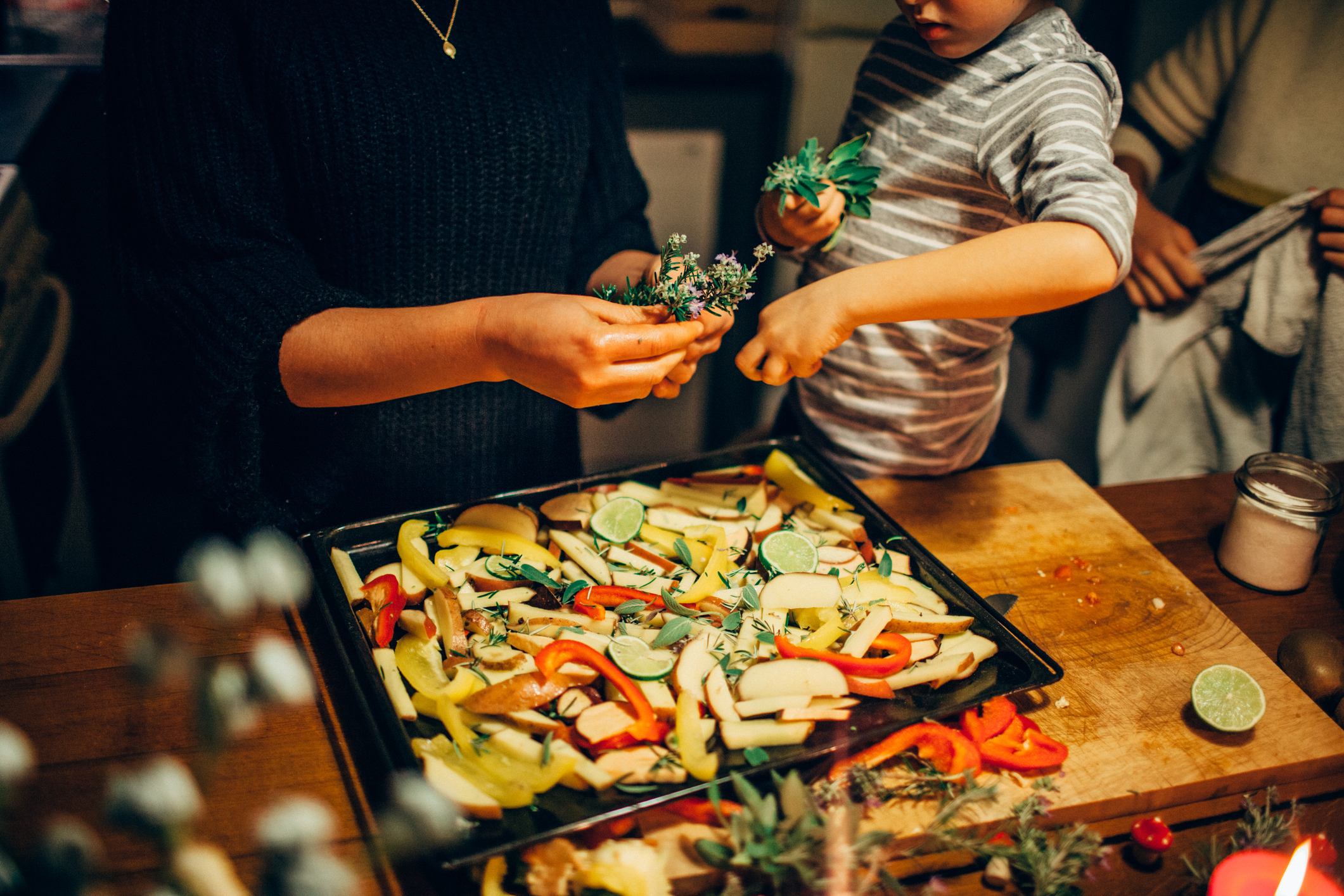 Many people consider Thanksgiving a marathon. For my large family, which entertains all year long for the Jewish holidays, it’s more of a brief jog around the block.

When I was a kid, my family of six often cooked and ate meals with my aunt, uncle and my four cousins who lived across the street. In my world, cooking a turkey feast for 20 is called Sunday Dinner. You may think we were a family of trained chefs or, at the very least, had some extra help. But neither was the case. The adults realized early on that they had a crew of sous chefs already in-house. They may be barely three feet tall, but kids are often an incredible source of energy, creativity, and assistance in the kitchen.

People don’t always believe me when I tell them that I teach kids as young as two years old how to cook. Yet, historically, children have participated in many aspects of food preparation from planting and harvesting crops to prepping and cooking multi-course meals. The frustration many modern parents feel during meal time, when their kids reject dinner or won’t come to the table, can often be alleviated by simply including them in the meal preparation process. Kids feel good when they have a job. And they especially love the idea of feeding other people. Cooking together is also an excellent way to expand their palates and expose them to nutritious foods.

Thanksgiving is the perfect time of year to get everyone in the kitchen–even the little ones can be given simple tasks like juicing a lemon or mashing potatoes.

It’s a win-win for everyone. The adults have extra help in the kitchen, kids get to feel important while learning something new, and everyone gets to spend quality time together.

Here are a couple of recipes from my new cookbook, Easy Meals to Cook with Kids, along with instructions on how to include kids of all ages in preparing two tasty appetizers. 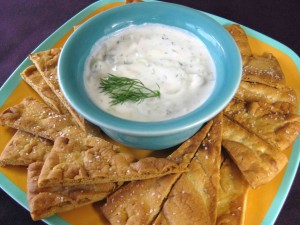 If kids can dip it, they’ll eat it! This kid-friendly dish tastes better the longer it marinates, so plan on making it a day or two before your holiday meal. Traditional tzatziki calls for draining the yogurt and cucumber for at least half an hour but this is a much quicker recipe and turns out just as good.

KIDS 6 and up: Drain the yogurt of excess liquid by carefully tipping the container
over the sink. Scoop the yogurt into a medium-sized bowl, add the sour cream, and stir.

KIDS 2 and up: Gather the grated cucumber into your fists and squeeze out as much liquid as you can until it’s drained of moisture. Add the cucumber to the yogurt and sour cream mixture. Stir in the vinegar, lemon juice, olive oil, garlic, dill, salt, and pepper and combine well. Serve immediately at room temperature with Crispy Pita Chips or marinate in the refrigerator for a few hours so that the flavors blend.

KIDS 8 and up: On a cutting board, carefully slice each pita into eight triangle-shapes with a pizza cutter or a knife. Pull each triangle in half so that one pita pocket will yield a total of 16 pieces. Lay the pita pieces close together on a greased baking sheet (or one lined with parchment paper). Pour the olive oil into a small bowl.

KIDS 2 and up: Brush each piece of pita generously with olive oil using a pastry brush. Sprinkle with salt (and herbs and garlic, if using).

ADULTS: Bake the chips for 12-14 minutes, or until crispy and golden-brown around the edges. Store the pita chips in a sealed container or bag at room temperature for up to 4 days.

Julie Negrin, MS, CN is a nutritionist, cooking instructor, and the author of Easy Meals to Cook with Kids. She has been teaching adults and kids how to cook for over twelve years and writes about how to cook simple meals with real foods on her blog, My Kitchen Nutrition. Read more >