Killer Coke: A review of The Coke Machine | Civil Eats

Killer Coke: A review of The Coke Machine 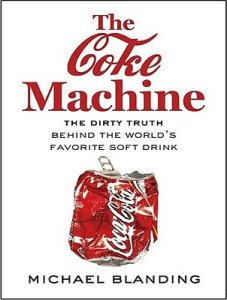 My dirty truth is that I have a collection of Coke bottles from around the world: one from Mexico, one with Arabic script, one covered in unrecognizable lettering and filled with Yugoslavian beach glass, and so on. I was a teenager when I amassed them and totally oblivious to the implications behind this international menagerie of emptied glass. This drink was everywhere, tailored slightly through variations in local water and variations in bottle size, but ultimately the same. I loved that I could find it anywhere.

Michael Blanding’s book, The Coke Machine: The Dirty Truth Behind the World’s Favorite Soft Drink aims to tell the real story behind that happy global picture of people who speak different languages, have different skin color, but happily drink Coke. His story begins in 1886, with Coke’s origin as a snake oil tonic, and extends all the way up to its present incarnation as a multinational beverage corporation.

The story of the company’s early days captivatingly chronicles the foundation of its corporate mission: an aggressive and well-funded advertising campaign with a focus on the creation and growth of a symbolic product that would equate the source of happiness and leisure to a carbonated drink in a bottle.

One of the more troubling accounts in the book is of a town in Mexico called San Juan de Chamula, where newborns are fed Coke in their bottles, locals worship their Saints by downing ritual glasses of Coke, and church-goers leave Coke offerings at their altars. As one local guide explains, “Here Coca-Cola is cash, poison, magic, passion, pleasure, torture, love and medicine.” But not everyone has welcomed Coke’s presence.

Coke has been the target of several major crusades, starting with what Blanding calls “The Battle for Schools”—the ongoing effort in this country to get soda out of elementary schools. But where things get really uncomfortable (and where my well-worn jaded shell starts to crack) is in the developing world. The second half of Blanding’s book is devoted to detailing the presence of Coke in Colombia and India, and the two long social justice campaigns that have emerged out of their troubles in each country.

In Colombia, the company is accused of turning a blind eye to—or possibly colluding with—local paramilitary groups who harassed and murdered union members and leaders at the Coke bottling plant. In India, troubles have stemmed from accusations that the company is overtaxing a dwindling water supply and contaminating local soil and groundwater.

But the tales of Coke crusading turn our to be Pyrrhic victories. The book does not end on a high note. Despite the hard work of local organizers in Kerala, the tireless efforts of the Colombian union SINALTRAINAL, and the actions of college students in the mid 2000s who rallied for US activist Ray Rogers and his “Killer Coke” campaign, winning a battle against a truculent and wealthy corporation turns out to be incredibly hard. I was left bereft, wondering: When we win a campaign against a corporation, what are we really winning anyway?

It’s hard to read about American college campuses canceling their Coke contracts and choosing Pepsi instead as some kind of victory. I remain angry that food corporations are buying our educational systems—be it elementary schools with vending machines or universities bound by single company buyouts that leave them chanting “Coke is It” at their football games. I am angry that growth without end or limitation is the only model big business is interested in. But my anger about Coke’s unsettling presence in schools, churches and almost everywhere else (including my own childhood memories), sparked my own protest as I read the book on an airplane: I let the flight attendant pass without asking her for a diet coke. As small victory–but meaningful, nonetheless.