GIPSA Under Attack by... A Pro-Consumer Group? | Civil Eats

GIPSA Under Attack by… A Pro-Consumer Group? 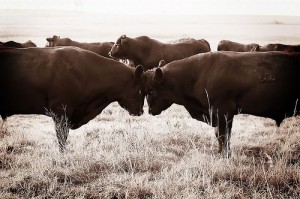 It is countdown time for the USDA’s Grain Inspection, Packers and Stockyards Administration, or GIPSA’s proposed rule that would protect small family livestock farmers and ranchers from the historical monopolies of the big four meat packers who control the market. You’d expect that pro-citizen groups and all enlightened meat consumers would be united in hot pursuit of fair market access for small farmers, pushing the USDA to allow the GIPSA rules to be enforced after the comment period ends on November 22nd. You’d be wrong.

GIPSA is good for the sustainable meat supply, national food security and the survival of the small family farm. The rule would truly level the playing field between thousands of small independent family farmers and ranchers fighting to stay in business and the four behemoth meatpackers who currently control prices and therefore monopolize the supply chain. Civil Eats covered the GIPSA story here and here.

In a strange twist this week, CREW (Citizens for Ethical Responsibility and Ethics in Washington) has attacked the head of GIPSA, twisting his words and sticking up for agri-business as we know it. CREW’s Executive Director Melanie Sloan runs an organization that does exemplary work protecting citizens from egregious governmental slip-ups on national ethics. But CREW penned a frontal attack letter to USDA Acting General Counsel Steven C. Silverman on November 15 accusing J.  Dudley Butler, Administrator of the USDA’s GIPSA, of scheming to benefit trial lawyers rather than protecting family farms. CREW’s letter takes comments made by Butler out of context and makes GIPSA appear to encourage lawsuits and thus represent another barrier to an ethical US meat production system.  The exact opposite is true.

According to Adam Warthesen of the Land Stewardship Project, CREW’s letter misses the point. “To me, the letter looks like it was written line by line by the large meat packers who will benefit if GIPSA fails. Farmers I talk to all agree that Butler is a man of integrity, and that it’s about time we have someone like him who understands what’s at stake for independent farmers. It is disingenuous of CREW to ask him to step down because when the rule passes, the administrator position will end anyway. Furthermore, if the opposition had concerns, why didn’t they raise them in June instead of bringing this to light one week before the comment period ends? This is clearly a smear campaign orchestrated by those opposing the rule.” said Warthesen.

Other farmer advocacy groups concur. In a November 5 press release Bill Bullard, CEO of R- CALF, which represents thousands of small-scale cattle ranchers, also calls this new attack a “deceptive smear campaign against an USDA official” and says this takes the focus away from the real problem.

“The purpose of the proposed GIPSA rule is to prevent monopolistic meatpackers from capturing control of the livestock supply chain away from independent family farmers and ranchers,” Bullard said. “And, the rule does this by preventing meatpackers from actually exercising their inherent, monopolistic market power to harm both consumers and livestock producers.”

The release continues, “Bullard charges that meatpackers and their apologists are trying to divert attention away from the necessity of the GIPSA rule by attacking the GIPSA chief. He said the first attack came from BEEF magazine writer Troy Marshall, who unethically captured only a partial response Butler made to an audience member’s question during the annual meeting of the Organization for Competitive Markets (OCM) over a year ago. Bullard said Marshall then used Butler’s partial response to falsely accuse the GIPSA chief of intending to encourage more lawsuits in the livestock industry with the GIPSA rule.”

CREW, if you’re worried about benefiting trial lawyers, consider how they along with millions of American consumers will struggle to find meat not produced on factory farms for their families’ tables when all small producers of cattle, hogs, lamb or chicken are driven out of business by large meat packer monopolies. You should know that GIPSA is good for small farmers and consumers. You have chosen the wrong battle with potentially tragic results for family farmers.  You should go attack industrial meat or Monsanto if you’re hankering for a fight. We’ll support you if you do.