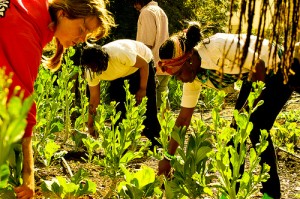 Not unlike their rural counterparts, urban farmers often make do without a secure relationship to the land they farm. Whether you’re in the city or in the country, being land-insecure makes planning the future nearly impossible. So, when the Oakland-based City Slicker Farms received $4 million earmarked precisely for acquiring land to grow food on, it came as a welcome surprise. The funding was awarded as part of a $5.4 billion state bond for projects involving water quality and access, park improvements, and natural resources and park preservation. And it’s more than a financial boost: it’s a game changer.

“Programs like ours often rely on the generosity of people who let us use their land–and they might end up wanting to sell it or develop it,” says Barbara Finnin, Executive Director of City Slicker Farms, “so we know deeply that it’s painful to put big infrastructure in and not to have the land for very long.”

For nearly a decade City Slicker Farms has been quietly scaling up their work in West Oakland, a historically under-resourced, largely industrial neighborhood that lies just across the freeway from the city’s downtown area. In that time they’ve built seven highly productive produce gardens, a greenhouse, and an education program, while supporting over 100 families with backyard gardens.

Unlike the ever-popular community garden model, City Slicker Farms is designed to distribute fresh food as widely as possible. “If we had a community garden, it might only impact 10 families,” explains Finnin. “With our Community Market Gardens we’re using all the space to grow a lot of vegetables and distribute through a farm stand; that we way we can funnel food to a lot more people.” However, none of the organization’s current garden plots are very big. In addition, many are odd-shaped and it’s not uncommon for City Slicker employees to be seen transporting a tool by bike between sites.

The organization already has a permanent 1.4 acre site in mind–a former paint factory that has undergone a brownfield cleanup process. The site’s owners approached City Slicker Farms last year and invited them to apply for the bond funding together. Key to the application process was a three-month long community design process with West Oakland youth, seniors, and families. Thanks to that process, the resulting park will include not only a large garden and orchard, but a chicken coop, a beehive, a dog run, and a tot lot.

Finnin says City Slicker’s seven current Community Market gardens allow them to grow around 7,000 pounds of produce a year. This new land is expected to double that number. In a neighborhood without a single full service supermarket, such growth could make a crucial difference. “It’s much needed,” says Finnin. “We run out of produce at
our market stands all the time.”

Although $4 million is an impressive number in the urban gardening world, the bond funding only covers the acquisition and development of the park/farm, and not staffing.

But Finnin says City Slicker hopes to provide as much work for area residents as possible. “In the construction phase we plan to see the money going into West Oakland.” On the programming end of things, at least some work will be done by volunteers–City Slicker Farms worked with over 200 last year alone–but Finnin plans to undertake further fundraising in order to pay an expanded staff.

The Bay Area is changing fast, however, and a competent staff may not be all that’s necessary to secure a future of ultra-local food production in West Oakland. So Finnin is also thinking far into the future–beyond the work of City Slicker, itself. Her hope is to legally secure the 1.4 acre plot as a permanent farm, so that it doesn’t get sold for development down the line. The concept is similar to the kinds of land trusts you see in many rapidly developing rural areas. As Finnin puts it, “this is land set aside for West Oakland residents and we want to ensure that it’s going to be dedicated for community use in perpetuity.”