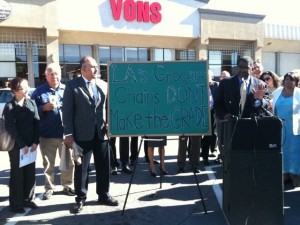 Access to fresh, nutritious, affordable food is one of the most important factors in quality of life, personal well-being, and the overall health of a community. Areas in which there is limited access to wholesome food—often called “food deserts”—are starting to receive the attention they desperately need. Earlier this year, the Obama administration launched the $400 million Healthy Food Financing Initiative, but change is slow to come and requires action at the local level.

The Alliance for Healthy and Responsible Grocery Stores, a coalition of more than 30 community, faith, and labor leaders, is taking that action in Los Angeles. Sounding the alarm, they just released the first-ever Grocery Chain Scorecard. The report issues grades to grocery chains on three key areas: Food access, store quality, and job quality.

Food access is judged by the proximity of a chain’s stores to underserved areas of Los Angeles. The Alliance looked at the number of stores per capita, adjusted by rates of diet-related illness, which revealed the areas most in need of access to healthful food. They considered if the chains accepted purchases with food stamps or through the Woman, Infants, and Children (WIC) Program. They also gave points if the store offered a free shuttle service for residents, since many residents do not own cars and bus routes are being scaled back.

Store quality scores are based on the availability and variety of healthful foods, the condition of the food, cleanliness of the store, and the overall shopping experience. The Alliance looked at the variety and freshness of produce, dairy, eggs, and lean meats. They considered if the stores offered environmentally friendly items, such as organic foods, recycled paper products, or compact fluorescent lamps. Other criteria included services such as a pharmacy, ATMs, or check cashing services.

Job quality ratings compare the wages, benefits, and employee relations of the chain. Workers at stores in West L.A., for example, earn an average of $7,000 more a year than those in East L.A. or South L.A.

Although some chains performed well on one or two of the metrics, not a single chain scored well across all three. The chains that have the strongest presence in underserved communities, such as Superior, Food 4 Less, and Super A, generally ranked lowest on store or job quality. Specialty stores, including Whole Foods and Trader Joe’s, received high marks for store quality, but failed when it came to food access.

At the unveiling of the report, organized by the Los Angeles Alliance for a New Economy and the Progressive Jewish Alliance, I stood alongside more than 60 members of the community, listening as City Councilmember Paul Koretz called for grocery store accountability, emphasizing that, “Grocery chains have a responsibility beyond the bottom line.” The aim in this scorecard was not to ridicule companies for scoring poorly, but rather to encourage them to do better. As Koretz said, “Hopefully soon we won’t have communities where junk food is the only option.”

Andrew Wilder is a healthy foodie who likes to eat deliberately. He thinks Eating Rules, and writes about three of them—and everything in between. Follow Andrew on Twitter @eatingrules. Read more >