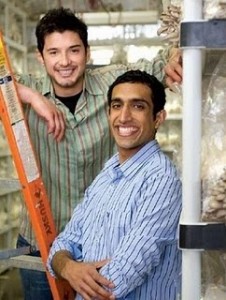 There’s so much buzz around the fledgling food business launched last year by two former University of California at Berkeley students, that you’d think they were pumping out premium honey.

BTTR Ventures, run by Hass School of Business grads Nikhil Arora and Alejandro (Alex) Velez, has been featured in the New York Times, the Wall Street Journal, the Los Angeles Times, Newsweek, and on the BBC.

Launched on Earth Day last year, the company has also won a steady stream of awards for its innovative, socially conscious, green business.

What are they doing? Well, they’re in the mushroom business: using recycling coffee grounds (from Peet’s Coffee & Tea) they produce spore starter kits so people can grow their own oyster mushrooms at home. It’s part of a zero-waste system that diverts 7,000 pounds of coffee grounds a week into a delicious and nutritious food source. Their production process also results in nutrient-dense soil amendment suitable for fruit and vegetable gardens.

The duo spent four years in business school together but they barely knew each other then. The seed for the company was planted by a visiting lecturer in a business ethics class who mentioned that women in Columbia and parts of East Africa were growing mushrooms from coffee grounds to fight malnutrition. This got the guys thinking about America’s coffee addiction and the farming, food, and financial potential of a consumer waste product destined for the landfill.

That idea spawned some serious mycology research and, in short order, led to the lads producing around 500 pounds of oyster mushrooms a week for Northern California Whole Foods stores and local farmers’ markets.

Then BTTR, um, mushroomed into a D.I.Y. enterprise; their Gourmet Garden Grow-it-at-Home Mushroom Kits retail for $19:95 online and are sold in Whole Foods Markets across the country. Their topsoil product can be found in Northern California Whole Foods stores and will soon be carried by local nurseries.

The mushroom guys, as Arora and Velez are locally known, passed up lucrative job offers (in investment banking for the Colombian-born Velez, and consulting for Arora, whose family hails from India) to launch their urban farming start-up on a shoe-string budget in a fraternity kitchen.

I met with Arora this week at the company’s warehouse in Emeryville before he flew to Washington, D.C., where the pair accepted their latest honor, a young entrepreneurs award from The Hitachi Foundation (with a $50,000 check attached), before speaking at a Tedx event on Saturday in the nation’s capital. 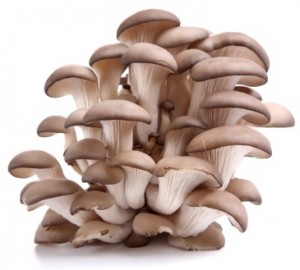 When you started your company, what kind of experience did you have in farming, food or mycology?

Zero. We just realized this was a good idea with a lot of potential. It’s a total by the boot straps, learn-as-you-go operation. We did a ton of mushroom research, consulted expert mycologists, and watched a lot of You Tube videos about growing mushrooms. I don’t think in the beginning we had any idea we’d become mushroom farmers.

What’s the significance of the company’s name, BTTR Ventures?

It stands for Back to the Roots (and is pronounced “better”) and encompasses the idea of creating a company that stands for sustainability, innovation, social responsibility–a better way of doing business. And “back to the roots” references the completely closed loop system of our sustainable business.

How did you get started?

Before spring break last year we filled 10 plastic buckets with soil and spores. When we came back nine were no good, completely contaminated, but one bucket had these lovely oyster mushrooms. We took them to Chez Panisse and were lucky that the chef, Cal Peternell, decided to saute them on the spot and told us they were good. Alice Waters happened to be there and she was intrigued by what we were doing. That gave us a bit of a boost.

Then we took a bucket to the Whole Foods Market on Telegraph, where the regional buyer told us if we could figure out a way to get him enough product he could “blow this business up.” Pretty quickly we went from selling three pounds of mushrooms a week to 300 to Whole Foods.

Did being in Berkeley help you get this business off the ground?

Absolutely. We had the support of university professors, and we got our first $5,000 of funding from Chancellor Robert Birgeneau, who sponsors a competition called “Bears Breaking Boundaries” for entrepreneurial projects. Alice Waters was an early supporter, as was Mayor Tom Bates, who told people to vote for us for one of our awards.

We wouldn’t be where we are today without the encouragement and backing of Whole Foods, in particular Randy Ducummon, the regional produce coordinator, who I think of as a mentor. And Shirin Moayyad at Peet’s helped us secure a steady supply of grounds.

And, of course, our customers at Whole Foods and the farmers’ markets have enthusiastically supported this project from the start. We have an absolutely vibrant and passionate community around us willing to go that extra mile to support a local, unique brands. 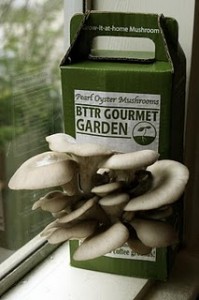 Why the shift from selling mushrooms to producing D.I.Y. grow kits?

Our customers started to ask us if they could do this themselves. We wanted to respond to that. There’s a lot of interest in D.I.Y. food right now. People can grow up to one pound of mushrooms in as little as 10 days and harvest as many as four crops from a carton.

What else has changed for the business this year?

We’ve gone from the two of us to a company with six employees, and we’re starting to hire people with specific skill sets we need. We moved from an office near the Oakland Airport, which was less than ideal, to a warehouse in Emeryville. We moved out of student housing. I live in San Francisco and Alex lives in Emeryville. And we started to pay ourselves $300 a week.

In what ways is your environmentally-sustainable business socially responsible?

We donate a percentage of sales to worthwhile causes. Alex had cancer when he was in high school, so we wanted to do something to support research to fight that disease. We hire people with children who have been unemployed for six months or more, through a jobs program in San Francisco called JOBS NOW!. We donate top soil to school gardens and community farms. We educate students about growing their own food.

How do you two work as partners?

We complement each other. Alex has a finance background so he tends to handle that end of things and I’ve done some computer stuff, so I do most of the website work, but the truth is we both have our hands in every aspect of the business, that’s how it is with a start-up.

He’s like family now, we’re like brothers. My family follows the Indian guru Sai Baba and when Alex was in his teens he was twice approached by people who told him that Sai Baba would come into his life. You should have seen the look on his face when I was rifling through my wallet and he saw a picture of  Sai Baba with his name on it. We laugh about it now.

What advice do you have for other budding young food businesses?

Don’t just focus on profits. It’s important to think about the community, environment, and sustainability. Customers will support companies during tough times if they produce a quality product and operate with integrity, respect, and a desire to help the communities they’re in.

Pursue opportunities that pull at your heart. If you believe in your product, mission and long-term vision, the tremendous amount of time and energy–we work 12-16 hour days–doesn’t seem so hard.

Get out there every day, put yourself in front of customers and tell your story. The community support and feedback you will get in return will be invaluable.