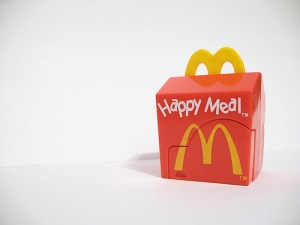 Last Tuesday, while most of the nation was distracted with the mid-term election, another vote was taking place in San Francisco City Hall. The Board of Supervisors approved an ordinance to place limits—based on specific nutrition criteria—on how toys are marketed by restaurants in the city and county of San Francisco.

Most media accounts got the story wrong. The Los Angeles Times for example, called it a “Happy Meal ban.” (It’s true that, according to McDonald’s, none of the current Happy Meals meet the criteria, but that’s fixable.) The real story is, how did McDonald’s—the nation’s most beloved fast food brand—get so beat up?

It’s easy to dismiss this victory as just another liberal law passed in “wacko” San Francisco. While the majority of the Board of Supervisors do lean to the left, passing this bill was by no means a slam dunk. To the contrary, it took months of organizing and coalition-building to get the job done. Along the way, proponents faced numerous obstacles, including underhanded lobbying, deceptive polling, and more.

How did they do it? According to Judy Grant, Value [the] Meal campaign director for Corporate Accountability International (CAI), the lead organizing group on the ground, “the old-fashioned way – we hit the phones and the pavement.” [full disclosure: I’m on the advisory board of CAI’s Value [the] Meal campaign.] Once the bill was introduced by Supervisor Eric Mar, CAI quickly realized the industry would defeat it without a solid grassroots voice. Grant explains:

We worked with Mar’s office to form a coalition from every corner of the City. Many San Franciscans felt the time for this law had come, so it was easy to find many residents in support. We took local activists to farmers’ markets and food-related events to get their fellow San Franciscans involved.

Many other organizations also played an important role, including the California Center for Public Health Advocacy, Prevention Institute, and the Campaign for a Commercial-Free Childhood, whose mailing lists and resources were critical to garnering support.

Testimony from doctors at the University of California, San Francisco was also key. Pediatricians told heartbreaking stories about how the children they see suffer.

Another critical organizing group was the Bayview Food Guardians, based in the low-income San Francisco neighborhood of Bayview / Hunters Point. Here is an excerpt from Food Guardian Jameela Toups’ powerful testimony:

The youth in my community are getting diet-related diseases like diabetes and hypertension at younger and younger ages. This is largely because of an unhealthy food environment that lacks fresh, affordable food and instead has an overabundance of fast food and relentless fast food marketing, including these toy incentives.

We at Food Guardians have helped some folks in our neighborhood change the way they eat. But we can’t reach everyone. There are hundreds of others that we have not been able to talk to yet. To reach everyone, we would need millions more in funding.

But the fast food industry has those millions. They can reach pretty much everyone, almost 24-7, and their message is counter to what we want our neighbors – particularly our youth – to hear. We try to reach youth before their habits are set, but far too often the industry has gotten to them first.

All of this organizing and testimony was needed to go up against a full-court press counter-lobbing effort by McDonald’s and the California Restaurant Association, the industry’s powerful statewide lobbying arm.

At the bill’s very first hearing, dozens of local supporters showed up while McDonald’s flew lobbyists in from corporate headquarters to testify, including the company’s “director of nutrition.” But the hearing got really bizarre when a parade of Mandarin-speaking individuals testified against the bill, each with similar talking points. One of these speakers was even seen consulting a script in the hallway.

Given that most Chinese people in San Francisco speak Cantonese and not Mandarin, were these alleged McDonald’s supporters even locals? “We were not able to confirm that they were from San Francisco, though we got the sense they were not,” said Supervisor Mar in a statement. “We’re also not able to confirm their connection to the fast-food industry. It’s all very suspicious.”

Another underhanded move involved expensive polling conducted by the California Restaurant Association that allegedly showed San Franciscans were largely opposed to the bill. But the survey questions were so biased that the tactic actually backfired. For example, the lobbyists asked, do you agree or disagree that “It should be up to parents, not city politicians, to decide what to feed their children,” and, “A working parent coming home after a tough day should have the option of occasionally purchasing a meal with a toy for their child.” Not exactly objective scientific survey methods.

While San Francisco Mayor Gavin Newsom (who was just elected lieutenant governor of California) has promised to veto the bill, organizers were able to secure a veto-proof majority, which was a tremendous effort in itself, requiring hundreds of phone calls and hours of meetings to get the key swing vote to come on board.

So how much money did McDonald’s and friends spend on lobbying against the measure? According to Deborah Lapidus, senior organizer for Corporate Accountability’s Value [the] Meal, at least tens of thousands, maybe even hundreds of thousands of dollars. But no amount of corporate cash was enough to overcome the passion of a few hundred community leaders and residents who said enough is enough. As San Francisco is often a national leader on health issues, other cities are sure to follow. McDonald’s may have to start loading up a few more buses.