Domino's Pizza and the USDA: The Bailout You Didn't Hear About | Civil Eats

Domino’s Pizza and the USDA: The Bailout You Didn’t Hear About 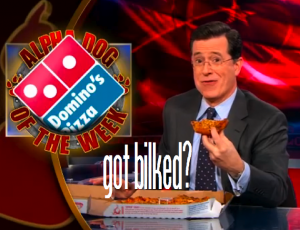 Chalk up another victory for Stephen Colbert’s gut. Back in January, the touter of all things truthy declared Domino’s Pizza his “Alpha Dog of The Week” for a “game-changing ad campaign” to promote its new pizza recipe. Consumers had complained that the old formula tasted like ketchup-covered cardboard, a factor that presumably contributed to the company’s sagging sales.

So, Domino’s did two things: it reformulated its pizzas to contain nearly twice as much cheese; and launched an ad campaign which took the bold step of acknowledging just how awful its old pizzas were, while gushing about the “cheese, cheese, CHEESE!!!” that distinguishes the new recipe from the old one.

With the logos of Goldman Sachs, Citibank, Fannie Mae, Bank of America, and AIG on display behind him, Colbert applauded Domino’s “for joining the great American corporate tradition of screwing your customers and then having the balls to ask them to come back for more.”

Turns out that Domino’s had something else in common with these ethically challenged entities, aside from the dubious products they dumped on unwitting dupes.

As Sunday’s New York Times revealed, Domino’s effort to rebrand itself and thereby revive its flagging fortunes was partly financed by a government handout, or, if you prefer, corporate welfare. According to the Times’ Michael Moss, Domino’s $12 million marketing campaign was created and financed by a USDA-funded organization called Dairy Management.

The free market had spoken, and its collective voice said “Yuck!” But instead of standing by and letting Domino’s slide deeper into an apparently well-deserved decline, the government chose to intervene with an infusion of cash and a profusion of cheese.

And Dairy Management’s efforts to get more milk fat on the menus at Domino’s, Wendy’s, Burger King, and Pizza Hut have been a huge success, boosting cheese sales by “nearly 30 million pounds,” as Moss reports.

This is a great thing, if you are a dairy farmer saddled with surplus whole milk. For the rest of us, though, it raises some disturbing questions:

(1) Do we really need to eat more cheese, given that cheese consumption in the U.S. has already nearly tripled since 1970? Cheese is now the single greatest source of saturated fat in our diet. Is there no other use for all this excess milk fat? Given its artery-clogging capabilities, could it be used to fill the fractures in our ancient, decaying water mains, or the cracks in our highways?

Seriously. There’s a guy in Vermont named Andrew Meyer who’s figured out how to make an awesome, super durable, non-toxic floor and furniture varnish from another by-product of the cheese industry, whey. Why not use the USDA’s resources to encourage this kind of innovation, instead of ladling more cheese onto every one-handed fast food item so that we can shovel even more saturated fat down our gullets like geese at a foie gras farm?

(2) Doesn’t this totally conflict with the USDA’s anti-obesity campaign? A spokesperson for the USDA gave Moss the department’s boilerplate spiel: “When eaten in moderation and with attention to portion size, cheese can fit into a low-fat, healthy diet.”

Yes, but how do the gooey, greasy, lactose-laden monstrosities that Dairy Management has helped to create fit into that mythical moderate diet? As Marion Nestle notes in my Q & A with her on this topic, “Who eats one-quarter of a pizza?”

And, about those portion sizes? Jonathan Bloom points out in his timely, terrific new book, American Wasteland (citing research from Nestle herself and her colleague Lisa Young) that portion sizes climbed steadily in the 1970’s, increased sharply in the ’80s and continued to rise in the ’90s:

In recent years, seemingly everything in the food industry, from portions to plates, has swelled, except for our common sense.

Bloom writes that “we grow about twice as much food as we need,” thanks to agricultural policies that encourage overproduction. And all that waste has to go someplace, whether it’s to the landfill, the compost heap (all too rarely), or our stomachs.

In his salute to Domino’s, Colbert didn’t fault the company for its unapologetic admission that it had been serving its customers a sub-standard product:

After all, we’re the human garbage cans who bought these trash discs by the millions. Domino’s is simply advertising that they weren’t fit to wipe your ass with.

The new formula is both a dietary disaster and a marketing triumph. But the Domino’s campaign is only a small part of the story; Moss’s piece also delves into the troubling history of Dairy Management’s attempts to manipulate consumers with unsubstantiated claims touting the alleged weight-loss benefits of increased dairy consumption.

Don’t they want to disprove the naysayers who claim the government can’t create–or preserve–jobs? Aside from aiding the dairy industry, this partly tax payer-funded pro-lacto largesse has a few other winners. Think of all the pizza deliverers, the cardboard box manufacturers, and the producers of bovine growth hormone who might have been laid off had Domino’s been left to its own devices and lousy slices. It’s great for cholesterol-lowering drug sales, too.

Who loses? The ‘little people’. Although, apparently, we’re growing bigger everyday, with the help of a heap o’ cheese.