Improving the Lives of Farmworkers with a Penny More per Pound 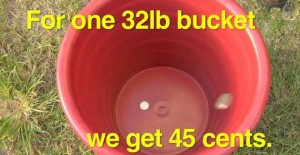 You would never participate in slavery, right?

I know, it seems like a bizarre question in this day and age–of course no sane, civilized member of a modern society would take part in the indentured servitude of others. Lincoln ended all that 150 years ago, didn’t he? And of course you and I would never have anything to do with slavery in 2010.

The dirty little secret though is that millions of Americans are contributing to it each week and they don’t even know it. When you buy tomatoes at the local Publix, Ahold, Kroger, or Walmart, you become the last link in a chain that is attached to shackles in south Florida. We all know Walmart especially is well known for their tireless efforts to force suppliers to keep costs down for everything they buy. One of the results of this kind of business practice is that the wage that pickers are paid for those tomatoes has not gone up for more than 30 years. That wage is $0.45 per bucket of picked green tomatoes, or $0.0145 per pound. And that’s for the ones who actually do get paid.

Since 1993 the Coalition of Immokalee Workers has been working unstintingly to improve these situations, with much success (such as seven convictions for slavery in the last 13 years), but there is still a long way to go. Following on the heels of their victorious boycotts of Yum! Brands’ Taco Bell, McDonald’s, Burger King, and Subway, they also concluded successful negotiations with Whole Foods and BAMCO. Eric Schlosser called their talks with Compass Group “the greatest victory for farmworkers since Cesar Chavez in the 1970’s.” But the work is nowhere near complete.

Earlier this year the CIW launched the Florida Modern Day Slavery Museum, an exhibit mounted on the back of a cargo truck like the one used to imprison farmworkers in the 2008 US v. Navarette slavery conviction. It has been touring the country, and will be touring parts of the Florida, Georgia, and Alabama later this month. 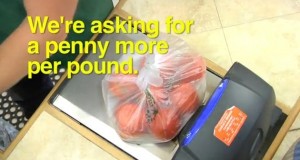 Now the CIW is turning its attention to those big grocery chains in an effort to get them, like the fast food chains before them, to commit to paying an additional penny per pound for the tomatoes they sell and to verify that the extra cent goes directly to the pickers. To help spread the word about this campaign, IATP Food and Society Fellows Shalini Kantayya and Sean Sellers have collaborated on a video that sums up the situation nicely.

The migrant labor issue is the vital subtext of America’s ongoing immigration debate. You may have seen the recent attention paid to it by Stephen Colbert and the “Take our Jobs” campaign.  Some of the workers in and around Immokalee are undocumented, most are here legally. Either way though, surely we can agree that they are all deserving of basic human rights while Washington works (or not) on the larger immigration reform debate. You can play your part by spreading the word, and by telling the management of your local grocery that you’ll no longer be a party to slavery, and you hope they won’t either.