Who's To Blame for All We Waste? We Are. A Review of American Wasteland | Civil Eats

Who’s To Blame for All We Waste? We Are. A Review of American Wasteland 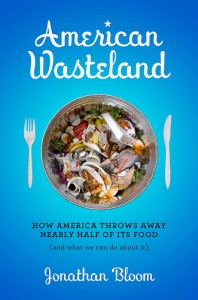 Throwing out suspicious food in our refrigerators is, for some, an inconsequential part of the day. But how many of us stop to think where this food actually goes? It doesn’t miraculously return to the land. Cities like San Francisco and Seattle, where city mandates and requirements have increased mindfulness surrounding food waste, rouse their residents to make composting a priority. The cost benefits to such a waste management initiative? There are many: People pay less for their garbage disposal, are incentivized to follow their city-wide programs, and ultimately help to decrease methane emission into our atmosphere, by allowing oxygen-reliant bacteria to digest organic compost material into water and carbon—as opposed decomposition into methane, which happens in the anaerobic environment of landfills.

But, because food waste is measurable at all levels of the food chain—production to consumer waste—the crucial question to consider is why we’re compelled to waste and what’s to be done to fix the crisis rather than compensate for it. Jonathan Bloom’s investigation into the topic is the subject of his new book American Wasteland: How America Throws Away Nearly Half of Its Food (and What We Can Do About It). In it, he seeks to understand the American sociology of waste as a result of our national food narrative, our opportunity waste and the landscape on which food has become devalued. When we evaluate the American habit of wasting food—a half of a billion pounds of food every day, 160 million dollars a year—the neglectful numbers become too large to ignore.

Our History of Waste: “Hunger has been a part of our country’s experience, but not part of its narrative.”

Bloom’s look at our national shift from frugality to bounty may be the most interesting angle in his study. His interview with Paul Root Wolpe, director of the Emory Center for Ethics at Emory University in Atlanta, introduces one part of the waste management solution: Eat more intentionally. “The reverence for our food—even if you have plenty of it—is important because it’s a constant reminder of the preciousness of food.” How did we stray so far from a respectful relationship with food? Bloom sees our behavioral change as part of a systematic, historical shift: 1700’s paved the way for economic thrift as settlers built communities and lived simple lives; 1800’s saw an influx of immigrants and a pioneering movement West which supported the psychology of thrift; early-mid 1900’s spanned The Great Depression and World War II—waste was unpatriotic. But by post-World War II, the use of chemical fertilizer grew and the cost of food declined—emphasis on American consumerism expanded along with food exports to foreign lands. The 1970’s ushered in fast, cheap food, as the 1990’s and early 2000’s, continued the “bigger is better” trend: Portion sizes increased, wholesale shopping emerged, pre-cut/pre-washed foods entered supermarkets, ready-made food made mealtimes easier. By 2007, pre-cut/pre-washed foods were a 1.5 billion dollar business—95 percent of supermarkets had ready-made food by 2008. Now, it’s 2010: We are weighing the benefits of small-scale, local farming against big agricultural corporations, and we are understanding that the devaluation of food doesn’t have to be permissible—at one point in our recent history, we knew better.

So who’s to blame if we, the consumers, find fault in the system? Everyone. Farm owner Jimmy Burch, who grows sweet potatoes, greens, and cucumbers, blames market pressure for the 15 to 20 tons of perfectly edible (but misshapen) cucumbers that he dumps a few times a day during harvest sorting. “The market just wants the very best,” he says.  The same market demand is explained by Charles Edwards, a salesman who has been selling produce for more than 35 years: “It’s become, in my opinion, far more selective. Everything is appearance, color, and attractiveness.” So consumer expectations grow as market competition increases. And as for the fate of  those tons of vegetables unfit for the marketplace: “The rejected cucumbers are driven back to their fields or neighboring farms and dumped on the ground.” On a fruit tree farm, perfectly healthy fruits may never even be harvested, if the ratio of time spent picking exceeds the weight of the harvest which migrant laborers are compensated for. Even government subsidized commodity crops—corn, wheat, oats, sorghum, barley, rice, soy beans, and cotton—have a nine percent waste rate of unharvested food.

Opportunity Cost: “To a certain extent, wasting food is universal. We’ve all done it, probably even today.”

Roughly 32 percent of produce from supermarkets, restaurants, and households are wasted. Our inefficient use of food astounds Bloom, who likens our human tendency to a “numbing effect.” But even the numbers that Bloom uses to explain our careless behavior are outdated; the last conclusive study on food waste was conducted by the USDA in 1997. Food has depreciated and as a result, the entire system pays a health, financial, and environmental price: Tax payers put money toward government programs like the National School Lunch Program which allow elementary students to waste one-fourth of their food, or a total of two billion dollars a year, while 36 million Americans don’t have enough to eat; restaurants, hospitals, casinos, cruise ships, and supermarkets pay high fees for large amounts of waste disposal; and 350 million barrels of oil a year are used to produce energy-intensive foods like meat, dairy, grains, fruits, and vegetables (27 percent of which are wasted ). Then, of course, there is water waste to consider, in making chemical fertilizer and irrigating for crop and animal growth.

American Wasteland quantifies, traces, and examines waste from field to table. Bloom visits farms (where nine percent of commodity crops are not even harvested), supermarket aisles (where a total of 30 million pounds of waste are collected per day in all 35,000 American supermarkets), apartment refrigerators (where three times as much trash waste goes down our disposals), restaurant kitchens (where one study calculates food waste to be around 60 percent of what ends up in dumpsters) and landfills (where 18 percent of discards are food scraps). Luckily, Bloom is hopeful that we can improve upon our actions. He offers a slew of interesting approaches to our food issues and fills the pages of his investigation with an optimistic—if not sometimes sarcastic—attitude for change.

To start, Bloom would like to see waste study become a priority. As researchers probe into every part of the food system where waste exists, America would have to re-frame and reconnect value to food. Restaurant waste would be re-used, redistributed, fed to animals; funded institutions (farms, schools, hospitals, restaurants, casinos) would be required to track their waste; individual households and businesses would be incentivized to compost; gleaning would become a nation-wide initiative, allowing food recovery groups to save already harvested–but rejected–food at the manufacturing level; Internet access to food donation sites would be government supported; a reduced-price section at the supermarket would allow shoppers a realistic way to gauge just how many foods are still edible after their sell-by dates; elementary schools would serve lunch after recess; and we’d simply stop producing twice as much food as we need.

At home, we would start to plan meals ahead of time, shop when we weren’t hungry, come up with recipes for what we already have on our shelves, and cook reasonably sized portions. Instead of culling perfectly edible food from supermarket shelves and tossing it into a dumpster, markets would be rewarded for their efforts to donate excess food to pantries, soup kitchens, and livestock farmers in the area. We’d hire back a government-elected official like Joel Berg to lead a national initiative for food recovery and waste management–and he would get the job done.

These are Bloom’s practical and convincing strategies with realistic motivations. In each of them, some part of the food chain is improved upon. “Mostly, it’s about awareness and effort,” Bloom believes. Take Great Britain as an example: A study of 74 wasteful human behaviors led to the activist campaign, “Love Food Hate Waste,” where pilot participants succeeded in cutting half of their food-related waste.

There’s no reason why we can’t and shouldn’t do the same.