Terra Madre: Focusing on Women’s Rights and Land Ownership in 2010 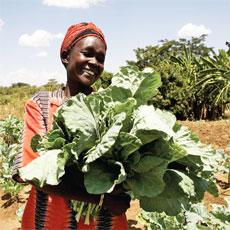 The theme of “food and place” led this year’s Terra Madre while a particular workshop, “Women’s Rights and Land Ownership,” best demonstrated its focus: How does the place of women in developing societies determine food security? As this question was brought to the fore, stories emerged from around globe shedding light on the resilience and creativity of women in their pursuit of both freedom and food.

The workshop commenced with introductions from the two panel speakers: Beatrice Costa of ActionAidItaly and Sabine Pallas of International Land Coalition. Both women are from organizations dedicated to generating equal access to land in the fight against hunger. ActionAid Italy is an international NGO that fights against poverty and injustice at the international level, focusing on women’s issues in countries in which they are active. International Land Coalition supports and promotes endeavors that ensure equal access to land amongst men and women through policy management and capacity-building measures.

Ms. Costa and Ms. Pallas highlighted key concerns surrounding land ownership and invited the audience to participate and share their experiences. “There is a mismatch,” stated Ms. Costa, “between the role women play in food production and their access to land. Although they are responsible for producing 80 percent of the food in foreign countries, only two percent of land entitlements belong to women worldwide.” Thus women lack the authority to make decisions, provide collateral for small loans to purchase seeds and fertilizer, and ensure a modicum of security for themselves and their families.

The mismatch between production and ownership is due to a variety of factors—namely gender blind frameworks, discriminatory customs and traditions, a need for policy implementation, women’s lack of awareness of their rights, and a lack of recognition for women as farmers, productive citizens and leaders at all levels. All of these elements represent the current political and cultural realities that women face in the Global South. It is now widely recognized that these problems are a major cause of poverty and food insecurity today.

There are many potential solutions to these problems. They take shape in advocacy and lobbying strategies, engaging communities for social change, monitoring and holding governments accountable, raising awareness at the institutional level, pushing for legal remedies through lands reform, supporting literacy programs, education and information campaigns, revising and strengthening communication strategies, as well as capacity building and mentoring. Some of the speakers’ stories attested to the efficacy of these approaches. One story in a particular demonstrated how civil society movements were able to generate change, transforming oppression into opportunity.

Samuel from Kenya, an employee of a community-based network dedicated to eco-farming, told the audience of the difficulties in bringing about change in his country:

“Unfortunately the land is in the hands of the rich and well connected people in government. Therefore women have very little access and control to this land especially at the community level. Further discrimination exists because traditional and cultural practices do not recognize women as legal owners. Yet, it is the women who feed their families and the country at large.”

Although a discouraging introduction to the plight of Kenyan women, Samuel added that things were beginning to change. A new constitutional dispensation had recently been enacted granting women the right to own land. But even so, Samuel stated that it still remained a challenge for such policies to be implemented from the national to the local level. “This is only a legal framework,” he stated, “It will not become a reality until people at the national, regional, local, and even family level begin to participate in some small way.”

Samuel’s analysis underscores the reality that women need to be empowered at all levels in order to play their crucial role in civil society, pushing for change:

“I realized that granting the rights of women in the books was not enough. We need to work with people in advocacy to ensure that we don’t lose the spirit captured in the constitutional dispensation. We need to empower women by making them part of this legal process–mobilizing them to work with organized groups in order to strengthen both their economic capability and social status. More importantly, we need to encourage men to work with women. Men need to recognize that women are powerful in promoting and sustaining change. More importantly, they must realize that this is not a threat but rather an opportunity to strengthen their own livelihoods as well as their country’s.”

For journalists Nicholas Kristof and Sheryl WuDunn, gender inequality is the central focus of their groundbreaking bestseller, Holding Up Half the Sky. In it, they argue that growing international awareness of the economic effects of gender inequality will create a catalyst for turning oppression into opportunity for women worldwide.

The current food movement possesses the momentum and power to push hard on this issue, raising awareness and offering concrete solutions for land use and marketing. In the words of former dissident and civil society activist, Vaclav Havel, “A human action becomes genuinely important when it springs from the soil of clear-sighted awareness of the temporality and the ephemerality of everything human. It is only this awareness that can breath any greatness into an action.”

When we look beyond ourselves–beyond our tables toward the plight of others—we must also acknowledge the important role we play, as members of civil society, in enacting change by spreading awareness and uniting individuals around a common goal. By enlightening others we enact our own form of change. Events such as Terra Madre–in particular its workshop on women’s rights and land ownership–demonstrate that it is both our civic and global duty to do so.