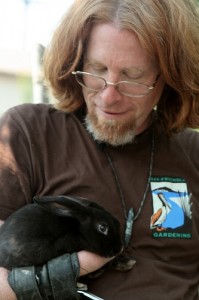 Jim Montgomery, one of the co-founders of Green Faerie Farm, isn’t your typical red-headed, disabled, gay, geeky, urban homesteader. But then how many of those do you know?

The gently-spoken 45-year-old likes to joke that in 1995, when he and two friends bought a 1920 house in West Berkeley with a large lot in back, the neighbors were excited when three gay men moved in–thinking, no doubt, that home renovation and gentrification would quickly follow.

Instead of fixing up the house, however, the trio, all reeling from having lost most of their friends to AIDS, immediately got to work in the garden and started raising a menagerie of animals, in what is now known as Green Faerie Farm.

His fellow farmers, both from Costa Rica, grow the edible cactus nopales and tropical fruits such as kiwi, passionfruit, and pineapple guava. The banana tree is yet to bear fruit but the leaves come in handy for traditional Costa Rican tomales.

The backyard farm also boasts some 20 chickens, about the same number of rabbits, a couple of beehives, and four female Oberhasli dairy goats (a calm, quiet Swiss breed) and their three kids. 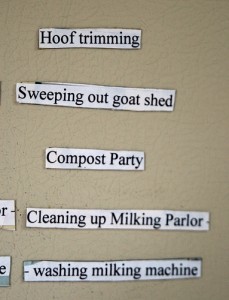 The urban homestead has its own greywater system and a solar-powered electric fence to keep raccoons, skunks, and possums out of the animal pens. Livestock manure serves as compost for the veggie garden and the farm animals eat plant matter passed over by the residents. The whole operation is meticulously maintained; the animals’ quarters are far from the house, the milking shed is freshly swept.

Montgomery was born with a birth defect, a genetic disability he shares with his father, in his case he has only two thumbs and no fingers or fully-formed hands. He wears prosthetic metal plates tied to his wrists by straps, which allow him to grip objects and handle animals. He moves about his backyard with grace, talks about his disability with ease, and exudes the kind of quiet confidence of someone who doesn’t view his physical difference as a limitation.

He grew up with animals; he had 26 guinea pigs at age 12, and went on to care for rabbits, pigeons, and chickens. As a teen, he started raising animals to feed his two-foot-long Burmese python. Life on the land is in his blood: His grandfather was a pig farmer in the Oakland Hills.

Featured in the upcoming homegrown film Edible City, profiled here, Montgomery shares his strikingly painted home (dark green with deep purple accents) with five other men and a housemate’s ailing mother. We chatted this week in his backyard farm.

Can you tell me the story behind the name Green Faerie Farm?

The name comes from the gay fringe–radical faeries–sort of the black Muslims of homosexuals. One of the problems of being gay is being accepted by straight culture and feeling like you need to move to the suburbs to fit in. Radical faeries reject that. They think gay people are unique, have tremendous creativity, and fewer problems around gender fluidity, or what it means to be masculine or feminine. The “green” is a nod to growing things and also in keeping with our political values.

How much of your food do you grow or raise yourself?

Would you explain your philosophy around raising livestock? 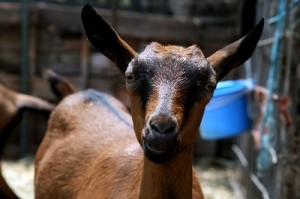 I eat meat and I care for the animals I’m going to slaughter. I name them and I know them. I protect them from predators–there are a lot of ugly deaths in nature. I feed them and provide them with space to roam and opportunities to socialize. These animals have full lives.

Culling a herd is a necessary part of raising domesticated animals. When I do kill an animal I do it quickly, respectfully, and in the most humane way. So many people buy meat with no bones or skin–it doesn’t resemble the animal it came from–they want to shield themselves from the reality of what it means to eat meat. If you’re buying cheap, supermarket meat that means you’re eating animals who were raised and slaughtered in horrendous conditions, who had no quality of life, and I don’t want any part of that large-scale industrial meat production.

How does your disability affect how you farm?

I’m slower at milking the goats than an able-bodied person but not as slow as a beginner. With my prosthesis I can hold a shovel in one hand. I’ve learned to adapt and since an early age figured out how to do things–like tying shoes–by tinkering and playing.

What do people say when they see you walking your goats?

“What kind of dogs are they?” And if I’m feeling like a smart ass I’ll say: “Swiss milking dogs.” Some people ask: “Are they llamas/ponies/donkeys?” Most people are open and curious. People always talk to me when I walk the goats, who enjoy the change of environment and dietary diversity.

As someone who has farmed at home for more than 30 years, what do you make of the growing urban farm movement?

It’s wonderful. I always knew I was right. I’ve always thought it was possible to have a sustainable life in an urban setting. I grew up in El Cerrito in a culturally diverse community where growing food wasn’t unusual. Many Italians and African Americans grew their own vegetables. When I moved here I met people from Vietnam and Mexico who considered it normal to grow food, as they did back home. It’s not a new thing.

Why do you think there’s an upswell in urban farming right now?

There’s a perfect storm of conditions: a downturn in the economy, a mistrust of the food industry, and environmental and health concerns. There’s mad cow disease, E. coli outbreaks, and salmonella scares. Few people argue against global warming anymore. In this country there’s an epidemic of medical conditions such as heart disease, diabetes, and stress-related illnesses. Americans have never been fatter or more malnourished. It’s a horrible combination and we’re exporting it to the rest of the world.

All these factors have contributed to people wanting to grow their own food. These things go in cycles; we’ve been here before. During World War I people didn’t trust canned goods and grew their own vegetables to help the war effort. During the Depression of the 1930s people grew food out of necessity. Victory gardens flourished during World War II. In the 1960s and 70s people went back to the land for political and philosophical reasons.

What’s the biggest challenge you face farming in an urban setting?

Controlling the rat population. I can catch one or two a night with peanut butter or bacon. The cat gets the juvenile rats. But big rats will go for baby chickens or bunnies. I’m thinking about getting a rat terrier, they’re bred specifically to keep the rodent population down. The bushy-tailed rats (squirrels) are also a problem. They eat a lot of the fruit. I came outside one day to find squirrels had “harvested” an entire crop of kiwis.

What advice do you have for beginning backyard farmers?

Don’t do it all at once. If you start with livestock begin with chickens, maybe, don’t try to raise chickens, bees, goats, rabbits, ducks, and quail all at once. You’ll get overwhelmed and burn out.

Similarly with growing greens, cultivate a small patch at first. And plant your favorite things to eat.

And don’t do it alone. It’s more fun and you create community if you tend animals or work the land with friends. When everyone pitches in it’s pleasurable, like a party, not a chore.

We’re living in a time where you can have 300 Facebook friends but have no real community. Urban farming is a great way to spend time with other people.