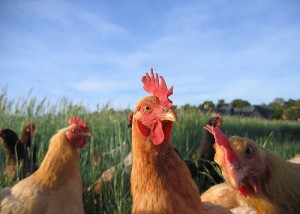 Despite recent crowing by the United Egg Producers—an agribusiness trade association—evidence shows that the national trend toward cage-free eggs is growing.

John Baker, president of Giving Nature Foods—a Pennsylvania-based cage-free egg company—asserts that “it’s shameful for the United Egg Producers to denigrate family farmers who don’t confine hens in small cages.” He continues, “As a multi-generational family farmer I can say for certain that cramming hens in tiny cages is not only cruel and inhumane, it also is a food safety threat.”

Fortunately, more and more players in the food industry are paying attention.

Earlier this year, Hellmann’s mayonnaise announced it that will convert to 100 percent cage-free eggs; all Wal-Mart’s private line eggs are cage-free; and Burger King, Subway, Wendy’s, Quiznos, Carl’s Jr., Hardee’s, and Golden Corral are just some of the major restaurant chains that now use cage-free eggs, many of them with increasing percentages each year. Additionally, Michigan and California have passed laws to outlaw and phase out cages for laying hens. California recently passed a law requiring all whole eggs sold in the state to be cage-free by 2015.

In addition to it being common sense that birds shouldn’t be confined in cages where they can’t even spread their wings for their whole lives, an abundance of scientific research [PDF] also supports switching away from cage confinement systems for hens.

And Dr. Michael Appleby, co-author of “Poultry Behaviour & Welfare,” sums it up well:

Battery cages present inherent animal welfare problems, most notably by their small size and barren conditions. Hens are unable to engage in many of their natural behaviors and endure high levels of stress and frustration. Cage-free egg production, while not perfect, does not entail such inherent animal welfare disadvantages and is a very good step in the right direction for the egg industry.

Not cramming hens into cages also benefits food safety [PDF]. Every one of the last ten studies comparing cage to cage-free systems found higher Salmonella rates in cage systems, including a 2010 study that found 20 times greater odds of Salmonella infection in caged flocks.

Rather than defending a system of confinement that’s simply indefensible, the United Egg Producers may want to consider a different approach: Taking a leadership position by advocating for a switch to cage-free production systems.