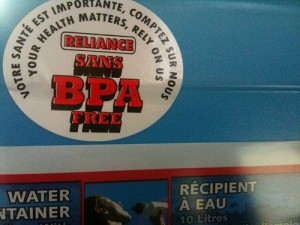 Recently, the Canadian government declared bisphenol-A (BPA) toxic, a step I hope the U.S. will soon take since the scientific evidence is mounting that BPA–along with many other endocrine disruptors in our environment–are abundant in our bodies and are having deleterious effects.

One problem with BPA is its ubiquity. It’s a chemical commonly used to line the interior of food and beverage cans, as well as to make plastic bottles and other hard, clear plastics. Ninety-three percent of Americans tested had detectable levels of BPA in their urine. Experts say the substance can clear from adult bodies with efficiency, but our constant exposure to it probably makes this irrelevant.

Even more problematic is that babies, children, and fetuses cannot excrete BPA efficiently, causing it to build up in their systems. Because of these findings, Canada banned BPA from baby bottles, as did several U.S. states, including New York, Connecticut and Minnesota.

Most of us have heard that BPA can be found in certain plastics as well as soda and food cans, but you may be surprised to know where else it lurks: the protective coating put on children’s teeth to prevent cavities, refrigerator shelving, milk and juice containers, microwave ovenware, eating utensils, plastic toys, DVDs, CDs, sunglasses, and receipt paper. It’s also present in some cigarette filters, and thus impacts smokers and others through second-hand smoke.

Let’s start with a tour of the endocrine system, which is made up of glandular tissue (the thyroid) as well as glands within organs (testes, ovaries, and heart). Like the nervous system, the endocrine system controls and coordinates bodily functions, but unlike the nervous system, which uses electrical signals that respond within split seconds, the endocrine system uses hormones, which have longer-lasting effects that act over hours, weeks, and years. The processes these hormones regulate include: metabolism, the body’s growth and development, and sexual reproduction. As hormones travel in the blood to reach each body part, the specific molecular shape of each hormone fits like a key-in-a-lock into receptors on specific tissues and organs.

BPA mimics the hormone estrogen, which means its molecular structure also fits into receptors specifically designed for estrogen. As you can imagine, when a synthetic compound gets into these receptors and it’s not the hormone your body needs, there are consequences.

Over 200 studies have found that these consequences include: brain development problems, breast and prostate cancer, birth defects, learning and behavioral problems in children, early onset of puberty, and obesity.

In my last column, I wrote about how children get 40 percent of their calories from junk food. It turns out, it may also be the BPA found in many of these packaged food containers and cans that’s also contributing to the increase in obesity. The Endocrine Society (TES) issued a report showing a correlation between high levels of BPA and obesity. Scientists are now calling substances like BPA and other endocrine disruptors “obesogens” because of the strong link they’ve found between increasing rates of obesity and higher levels of endocrine disruptors in our systems.

Unfortunately, there are a myriad of endocrine disruptors in addition to BPA found in our environment. The cumulative effect of all these hormone-like substances in our bodies is still unknown. But needless to say, they are best avoided.

These are some simple and easy steps that will help you reduce your exposure to endocrine disruptors: