Farmers Markets: Transparency is Our Model 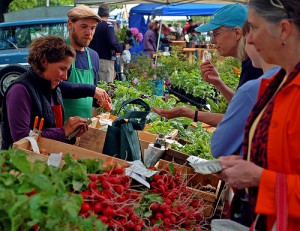 On October 15th, the trade publication The Packer reported on an issue of growing concern for farmers market vendors and shoppers: grocery chains are copy-catting farmers markets by using “farmers market” signs outside of their stores. The Wall Street Journal had previously reported on the issue, including retailers that use the term “farmers market” in their name, like Sprouts Farmers Market and Sunflower Farmers Market. Farmers in Washington State interviewed about the phenomenon seemed dismayed that retail chains “want to attract people and give the illusion that there are all these small farmers there.”

Kathy Means, vice president of government relations and public relations for the Produce Marketing Association defended the sale of produce at grocery chains under the name “farmers market” as a “legitimate marketing tactic.” Aside from military connotations, ‘tactics’ are generally defined as “isolated actions or events that take advantage of opportunities offered by the gaps within a given strategic system.” The Farmers Market Coalition opposes marketing tactics that cloud the truth. Taking advantage of the public by leveraging the term out of context is not only misleading, but, I believe, illustrates an unfortunate failure of creativity.

Farmers markets have been defined in many ways, as Means acknowledges, but never as anything resembling a chain grocery store, in which there are no farmers present, and where the dollars spent do not go directly to the local farm businesses who work so hard, on often slim margins, to grow the food that nourishes us. Farmers are, obviously, the key ingredient in any farmers market, and not solely in the form of a slick, full-color poster. I have yet to meet anyone that goes to the grocery store (‘farmers market’ branded or otherwise) to connect with their neighbors, create meaningful relationships with farmers, taste produce that was picked that morning, or ask questions about where and how their food was grown or how to prepare it.  For these things, people seek out farmers markets, where they can watch first-hand the power that their dollars have in nourishing local entrepreneurship and sustainable growing practices. In fact, a recent input-output analysis [PDF] in Iowa found that farmers markets there generated $59.4 million in economic activity in 2009 (Otto, 2010). That’s no small potatoes.

Means’ statement that “many fresh vegetables available at grocery stores come from local growers anyway” appears to be overly generous. My own (admittedly limited) efforts to identify estimates from Progressive Grocer and the Food Marketing Institute yielded the equivalent of shrugs. I greatly respect and encourage retailer efforts to support farms in their community by offering locally-grown produce to their customers. Even if it means that farmers must accept lower wholesale prices in return for their goods, who wouldn’t agree that more marketing alternatives for agricultural producers is a good thing?

Thankfully, this issue attracted the attention of the produce industry just as flaws were exposed in California’s farmers market system by local media, covered by The Packer in another story on October 15th. In this piece, Means echoed all our concerns by saying that product misrepresentation is something the entire industry needs to be watchful for, especially with the increasing popularity of ‘locally grown’ food. “It’s bad business, because once you lose your customers’ trust, it’s very hard to get it back,” Means said. The exposé prompted the California Department of Food and Agriculture to schedule four listening sessions around the state to ask for public comment about its Certified Farmers Market Program and address concerns about its integrity. It also prompted thoughtful recommendations for California’s certification system by David Karp in the LA Times.

As local food purchasing continues to grow in the retail sector, and farmers markets themselves evolve, we must find and use language that is appropriate, honest, and, more than anything, transparent to the shopper.  There are so many ways to describe the products for sale in a grocery produce section, and the fact that all produce originates on a farm somewhere is simply not enough to earn the label ‘farmers market.’  By the same token, I would encourage farmers markets on the ground, regardless of their capacity, to look at their mission and put in place systems to ensure integrity that are realistic, fair, and clearly communicated to all existing and potential vendors as well as shoppers. This is the first step for any farmers market to build trust and ensure that farmers earn fair compensation for their work.

Recent research [PDF] from the USDA Economic Research Service, for example, found that “grocery-store shoppers were willing to pay more for a ‘freshness guarantee’ marked as ‘harvested yesterday’ than for food that was produced within closer proximity.” Direct-market shoppers were “willing to pay more for both attributes, but placed a higher premium on information about production location (proximity) than on a marked freshness guarantee.” (Martinez, et al., 2010). Apparently, a ‘freshness guarantee’ seems irrelevant for shoppers that have the opportunity to simply ask “Did you harvest these greens this morning?”

I urge farmers, produce retailers and grocery stores to put on their thinking caps and find the right words to describe what it truly is that they are selling, whether it be freshness, convenience, or something else altogether. Shoppers are smart enough to see through the hype and put their trust in the venues that earn it. This is what farmers markets stand for, and why, in communities across the nation, they bloom again and again like wildflowers, pollinating healthy change and meaningful relationships.

Stacy Miller is Executive Director of the Farmers Market Coalition (FMC), a national 501(c)(3) organization dedicated to strengthening farmers markets for the benefit of farmers, consumers, and communities. FMC provides resources for farmers markets and works on behalf of its members to advocate for sound public policy and programs that support the long-term sustainability of farmers markets. She has a B.A. in English and Environmental Studies and an M.S. in Agricultural Education from West Virginia University. Read more >