GROW! A Film About Georgia's Next Generation Of Young Farmers | Civil Eats

GROW! A Film About Georgia’s Next Generation Of Young Farmers

By Christine Anthony and Owen Masterson 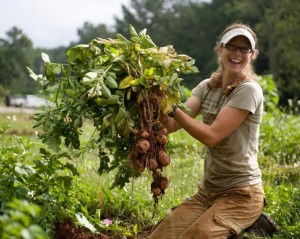 The cast of farmers in our documentary GROW! have something in common: a desire to grow clean, fair food on their own terms. They’re growers of vegetables, fruits, and grain, and they raise pigs, cattle, sheep, and chickens. They’re Georgia’s next generation of young, organic, and sustainable farmers. Most have college degrees covering all sorts of disciplines ranging from Physical Chemistry to Engineering, Pre‐Med to Political Science, English Literature to Accounting. Some have never worked in their chosen fields. Some have, got fed up, and left. Disgusted by corporate America and its influence on a broken food system, these young farmers had no problem leaving the cities to live more simply. Arianne McGinnis of Hope Grows puts it most succinctly: “Farming is an activism for a way of life that is in danger.” There’s a reason why the “food movement” earned its name.

One of the biggest challenges facing any aspiring agronomist is access to affordable land. Of the 12 farms featured in GROW!, only three are owned by the farmers. The other farmers rent, manage, or borrow the land on which they toil. Tim and Krista Showalter‐Ehst of Oakleaf Mennonite Farm arrived in Atlanta from Pennsylvania two weeks after the congregation had prayed for someone to grow food on the acreage surrounding their church. Paige Witherington and Justin Dansby manage Serenbe Farms, a certified organic fruit and vegetable operation which is part of an upscale eco‐community located 45 minutes from Atlanta. Arianne McGinnis and Elliott McGann of Hope Grows are friends who met in the aftermath of Hurricane Katrina while working for Americorps in New Orleans. They rent a farmhouse and six acres in Sylvania where they raise broilers, laying hens, and pigs.

Family land is another route some young farmers take. Wes Swancy grew up on Riverview Farms, acreage his father had once farmed conventionally. After graduating from college with degrees in Chemistry and no desire to become “lab rats,” Wes and his wife Charlotte returned to the farm. They persuaded his father to transition to certified organic. In danger of losing the farm, he was willing to try something new. That was 10 years ago and Riverview Farms is now one of the biggest certified organic farms in Georgia. My point is that there are many ways to farm even if you don’t have enough capital to start an operation on your own. Those who choose to take up the plow work long, hard hours and don’t necessarily make a lot of money. But as McGann of Hope Grows says, “Would I be happier working 40 hours a week at McDonalds and making minimum wage? I don’t think so.”

These kids love farming. For some, it’s the independence of self-employment. Those farmers find inspiration from their customers and the satisfaction of providing food for a community. For others, it’s the simple act of growing something in the ground that sustains. As for hard work, William Hennessey of W.A. Hennessey Farm sums it up, “People always tell you to do what you love. And if you’re doing what you love, it doesn’t seem like work.”

Our motivation for making a documentary that follows young, passionate farmers is to inspire other young people to take up farming and to learn the stories of those who have already. Maybe you’d like to help: We’ve launched a fundraiser for GROW! on Kickstarter, and we’re now 82 percent funded.  Time is up on the 31st of October at 11:00 a.m.

Transplanted Californians Christine Anthony and Owen Masterson work under the name Anthony-Masterson. They are a wife/husband photography and filmmaking duo on a mission to help grow more farmers in Georgia and across the United States. Read more >