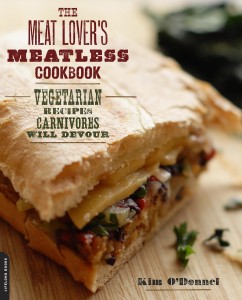 Food news hound Kim O’Donnel is often ahead of the culinary curve.

In a longtime online gig for The Washington Post, the seasoned journalist began blogging about all things edible and conducting kitchen chats before such venues took off in gastronomical cyber circles.

She started Canning Across America before pickling and preserving D.I.Y.ers turned up in a photo spread in the New York Times Magazine.

And she was one of the first mainstream reporters to cover the meat-free Monday phenomenon.

She began writing about the subject for the Post a couple of years ago in a recipe-focused column that proved the impetus for her new cookbook, The Meat Lover’s Meatless Cookbook: Vegetarian Recipes Carnivores Will Devour (Da Capo Press, $18.95).

The unapologetically omniverous O’Donnel, who thoroughly enjoys roast chicken, pork shoulder, and a juicy burger, earned her chef chops from the Institute of Culinary Education (on a James Beard Foundation scholarship no less). O’Donnel, who has written for Real Simple, The Huffington Post, and Civil Eats, says her book isn’t intended for devout vegetarians.

There are already plenty of classic tomes geared to that group, she notes, though herbivores will likely find dishes that make them happy in her book’s pages.

Rather, she wants to bring confirmed carnivores into the fold with satisfying recipes that won’t earn her the rabbit food rap. Flesh eaters take note: There’s no lentil-nut loaf among the offerings here. No sprouts or faux meat either. We’re talking hearty fare.

Every recipe had to pass the Kim O’Donnel test: This is a gal who includes a photo of herself as a toddler happily going to town on a T-bone on the back of her business card. (Nowadays, she wants to know where meat she eats comes from and how it was raised.)

So she knows her audience. “I want people who can’t imagine going a day without eating meat to give this a try and see if it doesn’t expand their horizons,” says O’Donnel, in an interview last summer at her home in Alki Beach in Seattle, where egrets and seals are frequent visitors.

“I’m not into food rules and I’m not asking people to learn a whole new language or set of skills in the kitchen,” adds the host of Table Talk, a weekly cooking chat on Culinate. “I’m just suggesting that they make an incremental change to diversify their diet and include less meat in the mix.” 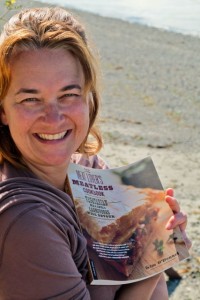 O’Donnel is optimistic, despite the fact that recent research reveals that many Americans rarely let a veggie pass their lips. The Centers for Disease Control, for instance, found that less than a third of American adults eat three or more vegetables a day.

Still, she’s hoping that if the steak-loving set come along for the ride, they’ll see, as she did, that there’s a world of flavors in veg-centric cuisine that can take the rut out of any cook’s recipe repertoire.

The guide is arranged a little differently from your typical cookbook. There’s 52 menus, one for each week of the year, organized by season, rather than chapters on different courses. The 95 recipes are, where appropriate, designated gluten-free, vegan, dairy-optional, kid-friendly, and leftover bonus, so you can tailor what you cook to your needs and those of others joining you at the table.

As for many, O’Donnel, 44, decided to try life with less meat for health, personal, and environmental reasons. She’s battled high cholesterol since her teens. Her dad died young from heart disease.

And she was struck by a comment made by Nobel Peace Prize winner and UN climate expert Rajendra Pachauri that one of the most important things you can do to help the planet is not trade in your gas guzzler for a Prius, but go meat-free once a week.

These days, she goes meatless, on average, about three times a week. That means there are a lot more legumes, grains, and produce on her plate now. “I don’t think in terms of looking for a stand-in for meat,” she says. “I’m just looking for a good mix of protein, complex carbs, veg and fruit.”

She’s a big fan of beans of all kinds and sees nothing wrong with eating eggs for supper (a concept whole-heartedly endorsed by this writer). From her cookbook selection she counts Potpie with Cheddar Biscuit Crust and Sweet Potato Black Bean Chili as two meals likely to win over meat lovers in a heart beat.

O’Donnel is in good company on the cut-back-on-meat bandwagon. Launched in 2003, Meatless Monday is an initiative of New York-based nonprofit Healthy Monday, in partnership with the Johns Hopkins Bloomberg School of Public Health. The day-off-from-meat campaign is an attempt to help Americans cut their saturated fat intake by 15 percent. (Mondays, at the start of the week, are considered a good day to set intentions.)

Vegetarian cookbook scribes Mollie Katzen and Deborah Madison are among a growing group of chefs who champion using meat as a flavor accent to a meal, if at all. Even hardcore carnivores like restauranteur Mario Batali have embraced Meatless Monday.

But O’Donnel, a recent West Coast transplant looking for more balance in her life,  has a touch of the zen about her. She’s not aggressively trying to convert carnivores.

Going meatless simply makes her feel better, she says, and she thinks other eaters might like to discover that too. Since she made the switch to a more plant-based way of eating O’Donnel pays more attention to what she cooks and turns out more flavorful food that costs less than a meal with meat. Who can argue against that?

Bay Area readers: O’Donnel will appear at 18 Reasons for a Meatless Monday dinner and talk tonight. She’ll also be talking up the merits of an eat-less-meat life at Kitchen Table Talks the following evening. Click here to find out about other upcoming events and appearances.