Wal-Mart Promises Local Food, While Big Ag Gears Up for a Fight 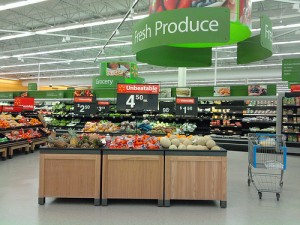 Last week, Wal-Mart–the largest grocer in the world with over 8,600 stores in 15 countries, two million employees and sales of $405 billion–made news when it launched sustainable agriculture goals for the U.S. and emerging markets focused on regional food systems. The move is part of decade-long trend of food businesses–from producers to purveyors–adapting, or at least claiming to adapt, to the consumer demand for sustainable food.

Wal-Mart’s decision–the details of which I will get to in a moment–comes on the heels of the success of chains like Whole Foods, which also touts local foods. But unlike Whole Foods, which is considered “niche”, Wal-Mart is mainstream. Some say that this announcement is going to shake the ground under agri-business, which has vehemently fought against anyone suggesting changes to the food system for years now. But agri-business companies are not going to take this shift in consumer demand lying down.

In fact, agri-business elites have been trying either covertly or otherwise to convince the consumer that sustainable food advocates have misled them into thinking the current food system is unsafe, unjust, and unhealthy. And the evidence shows that more of the same is coming down the pipeline.

Just last month, the subscriber newsletter Agri-Pulse reported that Tip Tipton–the man behind the “Got Milk?” campaign–has been tapped to create an “ag image” campaign that seeks “to reverse consumers’ negative perceptions about a broad range of issues including so-called ‘factory farming,’ the use of agricultural chemicals, livestock management practices, processed ‘industrial food,’ and high-fructose corn syrup (HFCS).” The amount the parties involved feel would be needed to reverse the tide of “consumer backlash”? Twenty to 30 million dollars per year. These groups hope to get funding from companies like Monsanto and Cargill and will be seeking out commodity check-off program funding via commodity growers if possible.

We will see if the various groups jockeying to lead the vision of this campaign will succeed beyond past failed attempts like the Corn Refiners Association’s Sweet Surprise campaign, which sought to change consumer ideas about High Fructose Corn Syrup but was instead mercilessly mocked. In the end, the Corn Refiners scrapped the plan in favor of an attempt at re-branding their product “corn sugar.”

One thing is certain, Michael Pollan is the most feared man to agri-business interests. To wit, from Agri-Pulse: “The Michael Pollans of the world and others of his ilk really have captured the imagination of the American public who now think that ‘organic’ is a brand and that everything else that is out here… has no brand image whatsoever,” said Jay Vroom, the CEO of CropLife America, an organization that advocates for the use of pesticides.

There is actually a very positive image of corn farmers and corn growers out there… [But] Food, Inc. almost won an Oscar. The other side is getting so much more funding, so much more interest in the mainstream media… We’ve seen so many attacks… we see Michael Pollan going on Oprah… what’s going to happen when those people like Michael Pollan start to have an impact in Washington on policies and regulations?

The author of the article even took to editorializing:

One wake-up call to the ag sector was the remarkable speed with which major food companies reacted to the Pollan message by replacing HFCS in their cereals, soft drinks and other food products with old-fashioned sugar–despite the fact that a number of studies have demonstrated that there’s no difference between the two as far as the human gut is concerned. The only difference, it seems, is in ‘Pollan-ated’ humans minds.

The “ag image” campaign, which according to Agri-Pulse will launch early next year, is joined by another initiative to protect future Big Ag profits with a messaging blitzkrieg. Agriculture communications departments are common at ag schools–what is new is the blatant fund-raising focused on agri-business. The College of Agriculture, Consumer and Environmental Sciences at the University of Illinois at Urbana-Champaign is speaking Big Ag’s language in its brochure to invite donations [PDF]:

There is a fundamental mistrust among many people of new and novel commercial technologies and the companies that develop them. These companies, critical partners in food and fiber production, face increasingly longer and more expensive development and regulatory lead times, and thus fewer years of exclusivity to reward innovation and pay down research costs.

Their answer: Two million dollars in donations to churn out “key partners in implementing and positioning new technologies vital to meeting a growing demand for biofuels and safe, nutritious and affordable food.” DuPont is on board for $200,000, which we know from a press release [PDF]. But just like the corporate-driven shadow funding this year’s political campaigns, we may never know every player who is behind these types of efforts.

Meanwhile, giants like Wal-Mart will divert our attention from its labor practices by presenting an initiative, that while questions linger, at least focuses on measurable commitments. These include investing in regional food system infrastructure to facilitate bringing local produce to Wal-Mart stores; the creation of a sustainability index that would provide information directly to the consumer in-store about production methods; and new guidelines for product sourcing–including specifically seeking out sustainable palm oil for use in over 100 packaged items sold in the store. The company hopes to double local produce (defined as that which can be procured in-state) sold in U.S. stores to nine percent by 2015.

There is no doubt that by its sheer size, Wal-Mart’s plan will have a huge impact on buying and growing practices worldwide. In places like the Southeast U.S. where cotton and tobacco growing has waned, for example, the company is encouraging the re-emergence of diversified vegetable operations. This initiative has the potential to push forward regional food systems more quickly than the government would be able to through policy-focused rural redevelopment programs–which are currently hyper-focused on broadband and ethanol.

But while Wal-Mart aims to bolster local communities by putting more money into the hands of farmers, critics argue that much of the money the consumer spends at the cash register will still leave the community. Marion Nestle writes that the initiative could only truly help farmers if Wal-Mart, which has historically demanded the lowest prices from its suppliers, pays them fairly for their work. Other sustainable food advocates think that the move is just “greenwashing.” Indeed, the plan makes no mention of organic practices or labor standards, both of which are very important to the sustainable food community. But unlike Monsanto’s claim of being sustainable based on drought tolerant seeds that never materialize, or PepsiCo’s claim to “encourage people to live healthier” while selling them empty calories, Wal-Mart’s plan has muddied the waters of sustainability with added nuance.

However, the ag sector is changing–many would argue irrevocably. Consumers who have developed a preference for unprocessed foods don’t seem to be ready to go back to junk food anytime soon. We will see soon enough whether consumer buying power and commitments like Wal-Mart’s inspire other companies to adopt the “if you can’t beat ‘em, join ‘em” mentality–and what kind of dent this massive corporately-funded “ag image” campaign will have. One thing is clear: the cash is on the side of the powerful, and the sustainable food movement still has a lot of work to do on messaging in order to define what is, and is not, sustainable.