The Revolution Will Be Baked | Civil Eats

The Revolution Will Be Baked 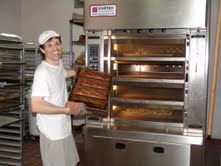 Four Worlds Bakery is a small business stemming the tide of a bad economy with sustainable practices–and good bread. This winter when I moved from New York City to Philadelphia, I found out quickly about this hot spot for baked goodness. A new Philly friend raved about Michael Dolich, the owner and head baker, as I bit into one of his delicious almond croissants at a local coffee joint. Her enthusiasm matched with the buttery magic in my mouth inspired me to investigate this West Philadelphia community staple.

In getting to know Michael and the bakery, I’ve been lucky enough to watch some of the more intricate processes involved in such a high quality, environmentally conscious and nutritionally rich product. “I want you to master the croissant before you move on,” Michael said to a new baker one morning, and my heart swelled to see that such attention was going into his employees as well as his bread. While discussing a few local businesses that were having a rough time staying afloat, Michael spouted an unexpected nugget of wisdom that morning amidst the whirring mixers and rolling pins clopping against wooden tabletops. “Business is all about relationships,” he said. After many more weeks of watching the business grow from wholesale to retail, it’s clear that this philosophy drives its success. From the bread itself to the customers—who were neighbors and friends to start out—to the community and the employees, and ultimately, to the planet, the growth of the business is just a series of blooming relationships. Everything is done with an intention to contribute positively to the health and well-being of the world around us.

Making his transition from a career as a trial lawyer to a lifetime artisan, Michael began as a volunteer baking for attendees at a Jewish retreat center in the Catskills. These first humble attempts evolved into a passion, fed by hours in his basement at home, with friends in the neighborhood as guinea pigs. The business was born from demand: he was making a quality product unmatched locally. The bread is centered on a slow fermentation, using the highest quality products. Whole wheat, spelt, and rye flour are milled in-house. The heart of the products, the starter, is more than five years old—created at the retreat center—and is regularly fed, which allows the bakery to use very little store-bought yeast. Dough is mixed and bread baked daily, so everything is made-to-order. When there are extras, they go to a local café to be sold, home with the bakers, or are given to neighbors.

Those neighbors are often customers and friends. If communication is key to relationship success, Four Worlds has got it down. Between the Web site, Michael’s bread blog, and the weekly e-newsletter, customers have easy access to details about how the bread is made, what it’s made of, the latest news at the bakery, and even occasional musings or personal anecdotes from Michael about the development of the bakery or inspiration for a new product. For example, there is an entry on the blog providing an in-depth discussion on bread’s nutritional benefits. Questions, concerns, and complaints are received by Michael directly, and he encourages customers to send feedback anytime.

The bakery recently moved to a new space, which is shared with other local businesses. In the hours Four Worlds is not operating—mostly from the late afternoons until about 4am—cupcakes and other desserts that don’t require a morning bake are made. A coffee roaster, whose coffee is sold at the bakery, shares the space. Their presence provides obvious benefits: a small community of people doing what they love and exchanging ideas, split costs, and more tasty treats. This also allows the oven, freezers, and refrigerators to remain at steady temperatures and in use around the clock in order to avoid wasted energy. To encourage peaceful cohabitation, all renters sign a contract, which states that all decisions concerning the space must be made by consensus.

It is the regular, everyday practices that most clearly define its relationship to the planet and make the bakery unique. Unavoidable disposable items like packaging for the ingredients or products are used sparingly, recycled, or cleaned and reincarnated as compost bins or containers. As a result, very little waste is produced. All machines in the bakery, with the exception of the oven and bagel former (a time-saver and quite a luxury for the bakers who are used to forming them by hand), are in their second life, if not their third or fourth. Brooms, trays, gloves, and knives are kept in small supply and treated with care. They’re mindful of water use, and extra croissant, raisins, and sliced almonds are being used for a bread pudding recipe in the works. When you walk in, there is a positive energy that feeds itself as it feeds you, and you understand why the satisfaction of the business well exceeds the cut in income Michael decided to take. Indeed, every time I walk in hungry I walk out happy.

Katie Ellison is a writer and baker based in West Philadelphia. When not cooking up something scrumptious, she is busy planning new travel adventures and applying for M.F.A. programs in creative writing for 2011. Read more >