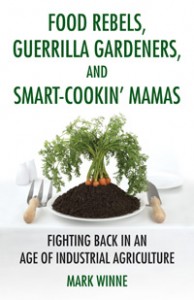 Despite the efforts of many communities that are working hard to support local agriculture and improve nutrition standards, the majority of the food consumed in the USA is still highly processed, unhealthy and unsustainable. Mark Winne, the co-founder of Connecticut Food Policy Council, End Hunger Connecticut!, and the National Community Food Security Coalition and author of the recently published Food Rebels, Guerrilla Gardeners and Smart-Cookin’ Mamas: Fighting Back in an Age of Industrial Agriculture talks about the myths of Big Agribusiness, the possible casualty of American democracy and how Food Citizenship can reclaim our dilapidated food system.

Industrial agriculture promises that it can feed the world.  Why don’t you buy that?

The industrial food system means factory style production, high technology and is capital intensive and we have seen a tremendous amount of harm that’s come from it. I mean, look at the growing resistance to antibiotics, look at the spread of genetically modified foods. We don’t even really know if GMOs are safe or what could be the long term consequences of such crop production. We also can see the way the industrial food system operates. It’s very powerful, it’s very well-heeled, and it has the best lobbyists in any state capital or at the Washington DC level. And it can pretty much control everything from labor practices to whether or not genetically modified food is accepted.

So what I’m saying is that the solution to feeding a hungry world doesn’t have to be about technology. It can be an engaged citizenry–but you, the consumer, need to participate.

In the first chapter of your book called “A Food Story for Our Times,” you have created a rather grim vision of our food future, a la Pottersville from It’s A Wonderful Life, which takes place in November 2020, just ten short years from now. The dairy industry has been nationalized, with a mega pipeline stretching across the country. All the soymilk is now produced by genetically modified growers and is sold by one big corporation called MongoPlant, and the Secretary of Agriculture has become the new authoritarian Food Czar. Can you really see this all happening in ten years or less?

I do think that kind of nightmarish scenario is possible. Things could reach such a crisis level that we unequivocally place all of our trust in the industrial food system, because we are frightened, because we are told there is not going to be enough food to go around, that there are far too many people. And climate change will have taken such a toll on our ability to produce food that we have to resort to more extreme technological measures.

The worst fear to me is that we may voluntarily forfeit control of our food because it’s easier and we may not feel we have an alternative because circumstances have become so dire. And the first casualty in all of that will be democracy. I am trying to make it clear to people who are in the alternative food system that while a lot of good things are happening, they are still pretty small measures. We shouldn’t be so sanguine, we are still barely at the margins.

In the book I talk about self reliance and individualism, about Ralph Waldo Emerson as the champion of individualism. And I do think that’s the other part of the story here. That is the antidote. Hundreds of thousands of people over the last 10 or 20 years have gotten into all manner of alternative food work.  And whether you’re a small organic farmer or you’ve created something like Stonyfield Yogurt–and you know, Stonyfield’s initial investment came from an order of nuns who made a socially responsible loan with a very low interest rate to Stonyfield, which launched the whole the Stonyfield enterprise–I think that it all has its roots in American individualism and self-reliance. And much of that has been profitable. 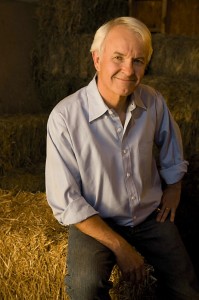 What does it mean to be a Food Citizen?

I often say that your hands are in the soil, your vegetables are on the cutting board and your voice is down at city hall. That is my little mantra. I use this term, “getting your heads above the plate”–meaning that we also need to start to become good food citizens. That means being aware of the political, environmental and economic issues of food. It gets pretty complicated and you might end up having indigestion. But what’s more important here is that we start to challenge each other more about all of those things. Shifting from food consumer to food citizen is an educational process, it’s about becoming more aware of these issues and then beginning to actually participate.

What about the idea of Food Citizenry as a force for community development? What steps can a community take to encourage more conscious food consumption?

I recommend two basic actions here: one is simple food production, whether its backyard gardening or community gardening, to broadening that out to a larger kind of commercial food production venture in our communities. And the second thing is education–we have to provide more educational opportunities in growing our own food. There is an excellent educational nutrition kitchen program in Austin, Texas that I talk about in the book called the Happy Kitchen which focuses on cooking and food purchasing and provides a good model to follow. Growing healthy local food also needs to be part of the public school curriculum. I think those are things that people can do. And they are doing them. We just need more.

It’s been huge lately. There are over 100 food policy councils in this country and especially in the last three to five years there has been a soaring demand for them. There are a couple of reasons for this: one is this huge new wave of interest in food that is taking over this country. And then with the last Farm Bill, there was this unprecedented interest in a much wider range of food and agriculture issues, and people who had not been interested in public policy work before came to see that there was a connection between food, health, agriculture and government. And so now with a food policy council, I think this is a perfect representation of a democratic institution at a local and state level where people and representatives of the food system can come together, where we can have open and transparent discussions about what’s going on and what the needs are and we can act accordingly. This allows all of us, as Food Citizens, to be involved, on the ground, in an ombudsman role.

Number one, it needs to represent a wide variety of food interests and involve many sectors of the community. Secondly, it’s critical that it does actually influence policy, and that is has done things over time from research to public education to getting laws passed, to being able to influence the size of government budgets as they effect food, to simply putting food on the agenda. And that’s where food policy councils have been enormously effective–they have taken food and brought it before city councils, brought it before state legislators, before department heads in government and made them pay attention to the role that government can play in influencing the quality, the price, the availability of food. So that is what defines a successful food policy council. It’s fairly aggressive and it is representative of a broad number of food systems interests, it has a vision, but it has a practical way to implement that vision. It’s not starry eyed.

Where have you seen food policy councils have an impact of late?

The New Haven Food Policy Council was instrumental in getting the school food service to go private and independent, and bring in Tim Cipriano, who is now the new executive food service director of New Haven Public Schools. That was one of the more significant wins from a food policy council. It’s all part of the task of keeping food on the public agenda. I also advise food policy councils to just let your elected officials know all the time what your position is on the current issues so that every time something comes up, your position is out there. Take the recent salmonella poisoning in eggs–what should your community food policy council say about that? Maybe we can say the industrial food system and government regulation has failed and we probably should be looking for ways to support local agriculture. Or let’s look at our own health inspections in our city and in our state and see whether or not they are adequate. There are things happening in our food system all the time, big ticket items and the little things. I encourage the food policy councils to create a body of knowledge, a whole string of documentation of what their positions are, what their interests are and keep that in front of their policy makers, and when possible make it available to the public at large.

Click on the links to read an excerpt of Mark’s latest book, Food Rebels, Guerrilla Gardeners and Smart-Cookin’ Mamas: Fighting Back in an Age of Industrial Agriculture or his last book, Closing the Food Gap: Resetting the Table in the Land of Plenty.