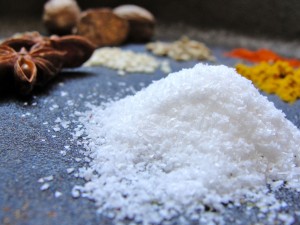 Salt is on the tip of everyone’s tongue and this, we’re finding, may be a big problem. When the Mayor of New York City, Michael Bloomberg, announced a health initiative to reduce sodium in prepared foods by 2015, reports suggested that lowered sodium levels could prevent 100,000 deaths a year, save $3.21 billion dollars in health-care expenses, and reduce cases of high blood pressure and cardiovascular diseases—a number that will continue to climb with rising obesity rates.

While Bloomberg’s motion may have only been a voluntary movement, it has sparked a lively debate around sodium reduction at all levels of the food production chain. Pro-salt advocates argue that salt reduction may cause unknown health risks, but it seems like the loudest line of defense, as in many hotly debated food issues, is not the concern for consumers’ well-being but for their taste preference. And businesses with much at stake like Cargill and Kellogg argue that low sodium variations will simply be unacceptable to the American palate. That may just be the initial truth: For most people, flavor controls their eating choices. If foods aren’t advertised as harmful to their health, many see no reason to change habits. Unless—that is—one truly calculates how much salt Americans consume and how it affects the body.

It’s been reported that Americans on average eat 3,436 mg of sodium a day, almost 50 percent more than the recommended 2,300 mg allotment. Eating beyond the limit has truly become a public concern because the habit affects so many. But who’s the culprit of this over-salting craze? It’s not the shaker on the counter (which has over 2,300 mg of sodium in one tablespoon) but the can of soup in the cupboard. On average, five percent of sodium is added to people’s diet while cooking and 6 percent while eating—with 12 percent from natural sources, and 77 percent from prepared foods. And it’s in this last scenario that salt is most misused.

Barb Stuckey, Executive VP of Marketing at Mattson, says for many shelf-stable favorites, salt is unnecessary for preservation and added to “extend the taste of ingredients, like chicken and vegetables. A little bit of salt,” she says, “a lot of bang for your buck.” And more importantly, she adds, the amount used for these benefits “simply keeps creeping up over time.”

The problem willing manufacturers face when attempting to lower sodium content, is that the flavor consumers desire is not food enhanced by salt, but the salt itself. Taste experiments prove to be too minimal, too flat to be effective or equally unhealthy due to rising levels of fat and sugar. But what happens if we shift our focus? What if we stop trying to recreate the taste of salt and, with an array of thoughtful techniques and spices, turn our attention back to the food itself—the true star of the operation? 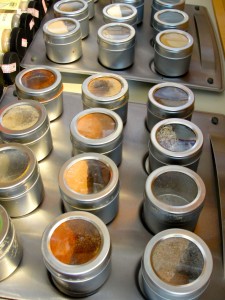 The answer lies in manufacturers who are producing foods with more creativity and nutritional value. In one such case, a pickle man has found a fresh palette of tastes and textures that make his products—Rick’s Picks—an attractive alternative to the salt superpower. Rick Field started experimenting with an encyclopedia of spices, herbs, and surprises like dried cherries, while making his first line of Rick’s Picks. He discovered lively combinations and unintentionally landed on a culinary anomaly: the low sodium preserve. “I realized how well citrus notes worked on the palate, especially with beets, and that these combinations brightened the flavor the same way salt does.” His low sodium pickles are not only defying consumer expectations but also they are winning their praises. Salt still plays an important part in some of Rick’s Picks products but Field remains mindful of the public health debate around sodium. It stands as proof that anyone, even a pickle maker, can lower salt by employing thoughtful practices and “more healthful, more nuanced, and more interesting ingredients.”

Small companies like Earth and Vine and Mendocino Mustard produce complex condiments (including Mango Tequila Jalapeno Grill Sauce and Hot and Sweet mustard) without the high sodium content. And San Francisco chefs–like Boulettes Larder’s Amaryll Schwertner and Pasta Gina’s Giovenina Basso-Ginsberg–have kicked the salt from their staple commercial items, like chicken stock and roasted vegetables. “I found that without salt,” Schwertner says, “you actually taste the purity of the chicken and the complexity of the mirepoix, and it gives people the option to add the salt at home, if they want.”

These low sodium crusaders have proven that an over-salted state can be reversed without sacrificing taste and convenience. It simply requires a redefinition of flavor. “When people talk about seasoning,” Schwertner says, “they are talking about salt. But to me, it means using spices, vegetables, and protein. It means not limiting the palate and not loosing a world of flavor.”

And while the products may cost more upfront, their value comes with benefits not listed on the grocery bill. Food becomes richer and bodies become healthier, when we rely on our own kitchens (small or commercial) instead of the complicated maze of politics and insurance companies to curb our health problems.

Jessica Goldman is a freelance food and health writer based in San Francisco. As a result of Lupus-related kidney failure in 2004, she was forced to begin a strict, sodium-free diet and now writes about her adventures keeping a healthy and low sodium lifestyle on her blog Sodium Girl. She also has contributed to a variety of publications including the San Francisco Chronicle, Arthritis Today Magazine, Examiner.com, and Living Without Magazine. Read more >