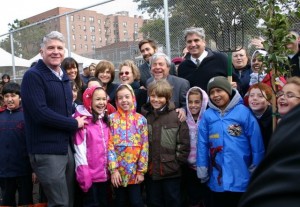 When Chez Panisse board members met to talk about expanding its Edible Schoolyard organic garden and kitchen program, board member John Lyons immediately volunteered: “I know just the place!” Lyons began volunteering at Brooklyn’s Arturo Toscanini Elementary School (PS 216) five years ago as a Pencil Principal For A Day, where he became acquainted with the principal, students, and the school’s quarter acre-sized parking lot–perfect for a school garden.

Clad in colorful rain boots, students planted a few tidy rows of kale and other hearty winter greens, and the garden’s first tree–a Macoun. They will soon add more apple trees, Asian pear, garlic, and cover crops. The program will run year-round, with an expected two lessons each month, per grade, for all kindergarten through fifth grade students. In addition to gardening, students will learn about the origins of food and will learn to cook seasonal dishes using their own produce. Principal Kaplinsky enthused, “When we give anything to children I see magic… From the time they enter PS 216 every child learns to appreciate healthy living, healthy food.”

Edible Schoolyard NYC is partnering with Columbia Teachers College, which will help develop the New York State standards-based curriculum and also measure the program’s effect on students’ health. “Nearly half of all New York City public school children from kindergarten to eight grade are either overweight or obese, which is often associated with poorer levels of academic achievement,” says Executive Director Christiane Baker. “Thanks to the support and commitment of the NYC Department of Education, the Edible Schoolyard NYC program aims to offer a solution to improving the way our children eat, by learning where food comes from and how healthy food can be delicious as well as nutritious.”

The program will not directly measure academic achievement. However, Baker points out that Edible Schoolyard is intended to enhance the classroom experience, not replace it, by providing another way for teachers to help struggling students make connections through hands-on experiences. Baker adds, “It’s a lot to ask a teacher to support a garden and to teach.” So Edible Schoolyard further supports teachers by providing two garden managers/teachers, Vera Fabien and Mirem Villamil, to maintain the gardens and related instruction. 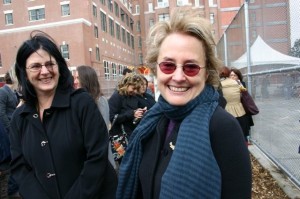 PS 261 is just the first of 25 elementary schools in Brooklyn that will eventually grow edible schoolyards with the help of a mobile kitchen bus that will travel between schools. There are also plans for an Edible Academy operating throughout the five boroughs, which will offer training and technical assistance for yet more public school teachers and principals who want to bring an “edible education” to their students.

Edible Schoolyard NYC will receive $1 million in funding from the city–a nice sum considering the city’s current financial crisis. As it happens, the City Council Member with jurisdiction over PS 216, Domenic M. Recchia, Jr., was recently appointed Chairman of the New York City Council Finance Committee, and was therefore in a prime position to advocate for funding for Edible Schoolyard at PS 261. An additional $1 million was donated by Brooklyn Borough President Markowitz, who crowed that this was “one of the few things that I’m involved in that no one’s against!” Another surprise benefactor was actor Jake Gyllenhaal, who with Lyons (president of production at Focus Features), co-hosted a fundraiser earlier this month and who quietly attended the opening ceremony Friday.

“We all know a tree grows in Brooklyn, but increasingly, kale grows in Brooklyn, too,” Borough President Markowitz said. Brooklyn may seem like the white-hot epicenter of the East Coast food revolution, but it’s worth noting that the pilot is not centered in one of the borough’s trendier neighborhoods, but rather in Gravesend, a neighborhood with a mixture of Russian, Pakistani, Chinese, and Mexican immigrants, and where 82 percent of students are eligible for free lunch.

The Edible Schoolyard, a program of the Chez Panisse Foundation, began at Martin Luther King, Jr. Middle School in Berkeley, California in 1995. There are also plans to expand the program in Los Angeles.