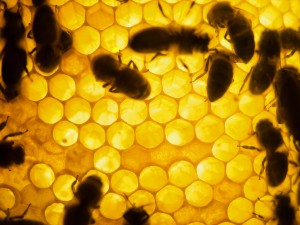 The New York Times made a long-awaited (and much emailed) announcement on its front page last week: The mystery of the ongoing and agriculturally devastating bee die-off (aka Colony Collapse Disorder, or CCD) has been cracked!

I’m not trying to hype the news. Here’s the headline and lede:

It has been one of the great murder mysteries of the garden: what is killing off the honeybees?

Since 2006, 20 to 40 percent of the bee colonies in the United States alone have suffered “colony collapse.” Suspected culprits ranged from pesticides to genetically modified food.

Now, a unique partnership–of military scientists and entomologists–appears to have achieved a major breakthrough: identifying a new suspect, or two.

A fungus tag-teaming with a virus have apparently interacted to cause the problem, according to a paper by Army scientists in Maryland and bee experts in Montana in the online science journal PLoS One.

It’s easy to miss, but in that last sentence, reporter Kirk Johnson takes a wrong turn. In essence, he confuses proximate and efficient causes (i.e. what bees ultimately succumb to vs. what makes hives susceptible to collapse) and from that logical error, a whole series of cascading failures ensue. But don’t take my word for it. Go read Katherine Eban’s crack piece of reporting for Fortune that dissects the problematic nature of the Times article; the underlying study; its lead author, Jerry Bromenshenk; and the role in the whole debate of the pesticide company Bayer CropScience.

The enigma wrapped in a mystery coated with pesticide

Let’s be clear: The study itself makes no conclusive claims about the causes of colony collapse disorder. Eban quotes from the paper that the research does not “clearly define” that the virus/fungus combination is “a marker, a cause, or a consequence of CCD.” A scientist interviewed by Eban very helpfully offers the metaphor of HIV to describe what’s going on with bees. HIV doesn’t kill you–it’s the opportunistic infections and diseases that follow HIV’s dismantling of a sufferer’s immune system that do. In the case of bees, the virus/fungus combo are most likely the follow-on infections that kill off an already weakened hive.

The Times blunder goes beyond whether Johnson or his editor misinterpreted the results of new research. Unfortunately, as Eban details–in part drawing on an unpublished piece she wrote for the now-defunct Portfolio magazine–the Times left out key pieces of the real story of the fight over research into what’s killing the bees.

As I wrote last January, many scientists believe that a novel class of pesticides called neonicotinoids–which are insect neurotoxins-has played a major role in CCD worldwide. An Italian entomologist at the University of Padua, Vincenzo Girolami, has research currently undergoing peer review showing that bees can be exposed to lethal levels of these pesticides through the use of seeding machines that sow neonicotinoid-coated seeds. These devices throw up a toxic cloud of pesticide as they work: bees fly through the cloud and either die or take the pesticide back to the hive. Once inside, even at low doses, it can cause disorientation or, as Girolami calls it, “intoxication” of whole hives.

The maker of this pesticide is Bayer CropScience. What does a corporation do when it discovers it may have developed and marketed a dangerous and potentially devastating product? Here in America, you confuse, you obfuscate, and you buy off scientists.

And as Eban skillfully details, that’s exactly what Bayer has been doing for the last decade or so.

Which brings us back to Bromenshenk. He was an expert witness for a group of beekeepers that in 2003 sued Bayer over the pesticide Imidacloprid. Bromenshenk later backed out of the lawsuit and, soon after, Bayer gave Bromenshenk a “research grant.” But it gets worse. Eban reports something the Times piece doesn’t: that Bromenshenk’s consulting company, Bee Alert Technology, is developing diagnostic tools for “various bee ailments.” The company stands to profit from curing bee diseases–and thus it’s rather convenient that Bromenshenk has published research that points the finger towards “treatable” conditions, rather than pesticides, as the primary culprit in bee deaths. Indeed, he had admitted as much to Eban while she was researching her Portfolio piece.

So where does this leave us? In an email exchange with me, the Italian scientist Girolami said he agrees with many of the experts Eban interviewed: The virus/fungus combination is secondary. In Girolami’s opinion, the underlying causes of CCD–the factors that are weakening the hives and making them susceptible to infection and die-offs–are most likely neonicotinoids along with the Varroa mite, a parasite that can infect and destroy hives all on its own.

In fact, last year Italy banned neonicotinoid-coated corn seeds and, according to this report, after the first non-neonicotinoid sowing, nary a hive was lost, although neonicotinoid spraying is still allowed in some areas–and still linked with bee deaths. France has also banned coated seeds–though there, as in Germany, the pesticide lobby has fended off total bans for now. As for the U.S., Bayer successfully convinced a judge to throw out crucial evidence in the beekeeper lawsuit and has, to date, prevented the EPA from releasing the data the agency used to approve neonicotinoids in the first place.

Eban concludes with the observation that little neonicotinoid research is going on in the U.S .at the moment, thanks in large part to Bayer’s efforts to “support” scientists who work in other, shall we say, less-sensitive areas. It seems it is up to scientists outside the U.S., in countries less beholden to corporate interests, to do the scientific heavy lifting.

Republished with permission from Grist