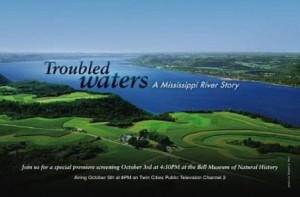 Last month, the University of Minnesota caused a stir when it decided to postpone the release of a film that focuses on the effect agriculture is having on U.S. waterways from Minnesota to the Gulf of Mexico. Troubled Waters–a film directed by Larkin McPhee for the University’s Bell Museum of Natural History, part of the College of Food, Agricultural, and Natural Resource Sciences–was held up, according to University Relations (the university’s PR office) to “allow time for a review of the film’s scientific content.” Yet ace reporting by Molly Preismeyer at the Twin Cities Daily Planet revealed that the film’s team had already thoroughly fact-checked the film, and followed the review process utilized by the PBS science program NOVA. Attempts to get the university to outline a standard procedure for research-based films were not fruitful. Then the story shifted once again when Dean Allen Levine told Minnesota Public Radio that the film “vilifies agriculture.”

Even though the University caved under pressure and allowed the scheduled premiere of the film to take place on October 3 and on October 5 on a local television station, the story of Troubled Waters has developed into a debate on academic freedom and the role a university’s donors should play in its research priorities.

Farmers at the center of the solution

Upon watching the film, I was surprised by what I saw. This is because a large portion focuses on farmers introducing new techniques to their fields that are reducing run-off and increasing soil fertility on their land. Instead of “vilifying agriculture,” it seems the filmmakers worked hard to focus on farmer-based solutions–like those of brothers Dick and Jack Gerhardt, who createdutilize a tool that assesses how much nitrogen is needed in a given field by reading chlorophyll levels. The “GreenSeeker” allows them to apply one-third the amount of nitrogen as in previous years. Because farmers often apply excess nitrogen to insure yields, much of which ends up as run-off in local waterways, inventions like these have the potential to empower farmers to save money while reducing the environmental consequences of agriculture.

The film also gives a platform to farmers like Jack Hedin, who discusses using cover crops in winter on his vegetable farm to reduce soil erosion and run-off; Tony Thompson, who employs perennial grasses and wetlands that soak up run-off on his 4000-acre soybean and corn farm; and Dan Coughlin, who raises grass-fed cows instead of keeping them in confinement–which produces excess nitrogen-rich manure that often ends up in waterways.

Looking closely at the federal agriculture policies, the film specifically cites those promoting ethanol production as a large contributing factor to the dead zone in the Gulf of Mexico. In particular, the 2007 Renewable Fuels Standard, which mandated that 15 billion gallons of corn ethanol be produced by 2022–therefore spurring farmers to grow more corn and use more nitrogen fertilizer. (Just yesterday, the EPA raised the amount of ethanol allowed in gasoline from 10 percent to 15, showing there is still strong support for these policies.) The film notes that ethanol remains controversial partly because it is seen as a means to lower dependence on foreign oil, but requires oil to produce the fertilizer that goes into growing the corn needed to make this alternative fuel. One researcher notes that it takes eight gallons of fossil fuel to produce 10 gallons of ethanol. Indeed, the film raises tough questions–many of which are not new to the discussion. So what motivated the university to call out the dogs?

Not long after the news broke that Troubled Waters was being held up, it came to light that Vice President of University Relations Karen Himle was behind the film’s purgatory. This information was notable because her husband John Himle is president of Himle Horner, a public relations firm that represents the Minnesota Agri-Growth Council, a group that promotes both ethanol production and industrial agriculture practices. More troubling, as El Dragón at Fair Food Fight points out, is the fact that Cargill–which is a key player in ethanol production–has its VP on the University of Minnesota’s board. And that the U of M also has a building on its St. Paul campus named for Cargill. In addition, the university has had funding put at risk by its research before, and so could be trigger-happy. Minnesota Public Radio reports:

In 2008, two Minnesota Soybean groups threatened to pull $1.5 million in funding after the U of M released a study that said using soybeans and other crops for bio-fuels could worsen global warming.

Where research funding originates has become a major issue for deciding what will be researched. Currently, as I’ve written before, matching funds from outside the government are required to get USDA research grants–which allows corporate interests to affect the research taken on. And when USDA has performed ground-breaking research that has the potential to change policy, it has often been played down by those in high places. This influence bought by agribusiness has particularly been a problem at land-grant universities, where a lot of the agricultural research is taking place.

Controversies around agriculture at universities are not new, but it has become more frequent in recent years, as the public becomes more aware of food production methods and industrial agriculture groups feel threatened by the pressure to change. Just last fall Michael Pollan was scheduled to give a solo lecture at California Polytechnic State University in San Luis Obispo when Harris Ranch Beef Company Chairman David E. Wood threatened to cut off $500,000 in funding to the university if he was allowed to do so. In response, the university changed its program to a panel discussion, which included industrial agriculture-friendly professor Gary Smith of Colorado State University and large-scale organic farmer Myra Goodman of Earthbound Farm. Pollan’s book The Omnivore’s Dilemma was also the source of ire for industrial agriculture proponents when it was selected as “common reading” last summer for incoming freshmen at Washington State University.

All of this added controversy is doing one thing that cannot be denied: bringing more attention to the issues at hand by driving interest in reading the books and seeing the films at the eye of the storm. As for Troubled Waters, I highly recommend you take the opportunity to see it for yourself. It is unique in that it puts a face on the farmers at the heart of the discussion, gives a broader picture of the issues at hand, and outlines options–including one community’s thriving alternative to ethanol–for building a more sustainable food system.

The film can be purchased from The Bell Museum. Watch the intro here: