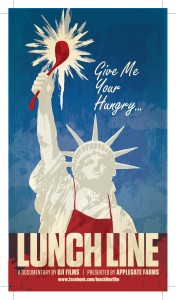 A new compelling documentary tells the complicated story of the federal school lunch program, its origins, challenges, and opportunities, teasing out nuances without leaving viewers in the weeds. Lunch Line, a film by Michael Graziano and Ernie Park, resists taking sides on this divisive topic even while it deals with vampires and wolves.

Vampires and wolves? Early in the film we meet five Tilden Academy students, black teenagers from a Chicago school where 99.8% of the students qualify for free school lunch. The Tilden crew are traveling to Washington DC, where they will compete in the Cooking Up Change contest and create a winning meal that costs $1.00 per serving, meets USDA nutritional standards, and tastes great. When one of the Tilden teens delivers a breathless analysis of the wolves vs. vampires conflict in the Twilight book and movie series, the filmmakers grab this motif and use it to tell the history of the federal school food program.

Wolves are cast as the social reform-minded liberals while vampires play the agriculture-protecting conservatives in a comic book-style illustrated retelling of school food’s origins. In one of the great bi-partisan compromises of American history, “wolf” Senator Jerry Voorhis meets “vampire” Senator Richard Russell to hammer out the 1946 School Lunch Act. The condition of Dixiecrat Russell’s support was that the program be administered by the USDA, an alliance that has proven both detrimental and advantageous. The national school food program is famous among reformers  for suffering a glut of starchy, processed USDA surplus commodities; yet its alliance with the powerful USDA has given the school food program the political clout needed to survive numerous attacks over six decades.

But what to do about the outdated nutritional standards and the program’s role in the obesity epidemic? Is the USDA just dumping subsidies into the school food program? As current and former USDA officials, school food activists, and others debate, the questions become increasingly complex. Meanwhile, we see the non-profit Organic School Project work miracles, bringing fresh organic foods that meet nutritional standards into Chicago public school cafeterias, only to see the program fold for lack of adequate funding.

Lunch Line reaches a climax at this crisis point: there is simply not enough money going into school food to make significant change. But just as some Chicago schools lose the Organic School Project the city responds to demand and transitions more whole foods-based menus. We learn about the national Farm to School program, a healthful collaboration between agriculture and schools. And as the film reaches a conclusion a familiar theme emerges: we achieve victory, or at least something vaguely approximating it, through unlikely alliances and compromise.

The primary focus of Lunch Line is telling the story of American school food. But if the implicit mission of this film is to spur viewers to action, it’s ambiguous as to where those entry points are. We see mostly government officials, bureaucrats, and activists as the main agents of change; more parent activists–especially parents of color–in the film would have made the film more compelling to the people who have the greatest stake in the school food system. Fortunately, the filmmakers are partnering with food organizations for its national screenings, and those alliances, plus a clever worksheet the filmmakers created, could help parents find those points for engagement.

To request a screening of Lunch Line email lunchlinescreening@gmail.com or send a note through the Lunch Line Facebook page. Watch the trailer at http://www.ujifilms.com/lunchline/