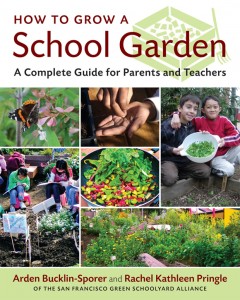 School gardens are as old as schools themselves. As Arden Bucklin-Sporer and Rachel Pringle see it, however, their return might just be the key to a modern education. Bucklin-Sporer and Pringle are the executive director and programs manager (respectively) of the San Francisco Green Schoolyard Alliance (SFGSA) and authors of the new book How to Grow a School Garden: A Complete Guide for Parents and Teachers. I spoke with them recently about the book, their network, and what it will take to change education—one green schoolyard at a time.

What will readers get from How to Grow a School Garden?

Arden Bucklin-Sporer: It’s a practical guide on how to build and design a garden, grow the community around it, and sustain the project. It’s not about how to grow this or that plant–although we do include anecdotes about what plants work best with kids.

Rachel Pringle: It really brings you step by step through the process; if you’re a parent or a teacher at a school, it shows you how to begin. And then once you have that space, how you sustain that space by creating a program around it–whether it revolves around nutrition or environmental education or outdoor education, or all those things.

What is the school garden landscape like right now?

ABS: Even in this time when resources tend to be shrinking, the green schoolyard landscape is thriving. In San Francisco, that’s largely thanks to Prop A, which provides bond funding to build green schoolyards. We have about 80 school gardens here and the nice thing is that they’re connected through SFGSA, so they can speak with one voice, and we can advocate on behalf of everybody. 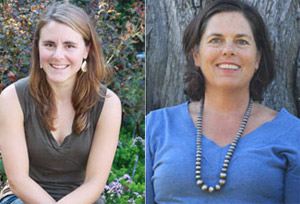 RP: And that’s something we’re seeing not just in our city but also in Berkeley, in LA, in Boston, and in Texas; these regional networks are popping up all over. I have a Google alert for school garden, so every day I get a whole list of things that are happening across the country and around the world. But the thinking around school gardens is also really expanding into nutrition, connecting kids with nature, and outdoor education.

There’s this renewed focus on agriculture and on where food comes from and I do think the recession has had a big hand in it. We’re in a society where we’re removed from how things come to be; there’s so much technology and everything just happens for us and it’s incredible, but I think people are really interested in the inner workings.

Especially when they have more time than money.

ABS: Exactly. So instead of looking outwards, more people are looking in their own back yards and in their schoolyards for adventure.

Green School Yards are also places to teach the practices of sustainability. For instance,  we have rain water harvesting in some gardens now, and other ways we incorporate discussions of percolation and ground water–these concepts are really important for kids to get.

You mentioned that these gardens are now often speaking with a unified voice; what is that voice saying?

ABS: We’re letting city and district officials know that we’re here—that this is a movement, and it’s organized. We’re also asking for funding, because green schoolyards are often under-resourced, so we’re looking for clever ways to support these programs. 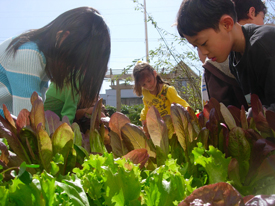 Is there a sense that a class that takes place outside the school buildings is peripheral?

ABS: Yes, there’s the idea that outside is for informal learning and inside is for formal learning. But you can do plenty of formal learning outside, and I think it’s more likely that a child who learns outside understands that learning goes on everywhere—rather than just turning it on when you’re in the classroom and off when you leave.

We’re also very concerned with place-based learning and making students aware of how their particular environment and ecology shape the garden. We want our kids to really know where they’re from, because we realize that if they haven’t taken care of or cared about something in their own sphere of influence, they’re less likely to care about broader environmental concerns.

Do you want to speak to some of the challenges people face when establishing a school garden?

ABS: For one, you have to think carefully about how to make it sustainable. Because no one really wants a garden that has fallen into disrepair and is causing problems for the school’s landscaping department. So there are challenges always in understanding what is an institutional garden that will go beyond your kids’ experience at the school and hopefully continue for decades. Resources and money to pay a garden educator are also often a challenge. You don’t have to have that, but it really does make a better program.

RP: Teachers coming out of credential programs and colleges are by and large not coming out with a background in ecology—or a general sense of systems or biology.

So we have all these teachers who are trepidant about incorporating an outdoor classroom into traditional teaching. Ultimately I think the sustainability of these programs relies on getting all teachers more familiar with outdoor classrooms—so you don’t have to hire a garden coordinator or find that extra funding.

We hear a lot about the barriers to entry for young farmers; are school gardens another outlet for young people who want to grow food?

RP: Yes, it melds into the urban agriculture world. And I think that is going to be a more common type of farming–growing food in urban areas and in small spaces. So teaching in a green classroom is kind of a primer for that, and I think there are a number of students looking for jobs like this.  I’ll be curious to see what’s happening ten years from now.