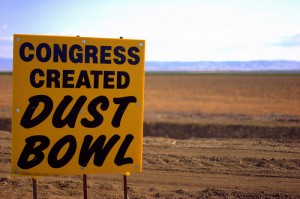 Last week while savoring the last of the stone fruit and the first crisp apples here in California, I worried about water. If you eat fruits and vegetables, you, too, should be very worried about water. This is because California, the state that supplies vast quantities of our nation’s produce, is running out. The culprit? Urban development gone wild, climate change, and generations of water transfer in a state with a high percentage land in the desert.

Reading excellent coverage of the farmers vs. fisherman water issue here on Civil Eats piqued my interest. Then, last week I heard a roomful of water experts discuss how our water issues impact food and farming. Presented by Sustainable Agriculture Education (SAGE), and Community Alliance with Family Farmers (CAFF), along with San Francisco Professional Food Society and Les Dames des Escoffier, the panel discussion made me more nervous and confused. What was true? After the panel I caught up with Dave Runsten, who heads up CAFF’s work with the California Agricultural Water Stewardship Initiative, to seek clarification.  Runsten’s July 2010 report Why Water Stewardship for Agriculture was published July 2010 and outlines some relevant points of the debate on water issues facing the state’s urban dwellers, farmers and the food system.
Dave, I’m swimming in the murky waters of this debate. Please review the main issues facing agricultural water management as you see them.

It’s a complicated topic even for experts. Here’s the big picture: California agriculture is essential to the food security of the United States. But we built a water system over many decades, starting back in the 19th century, which relies on lot of transfer of water from one basin to another. San Francisco gets water from Yosemite Valley, Los Angeles gets water from the Colorado river and from Northern California, etcetera. Today the LA region has a population of 20 million. If LA had to survive on its own water resources, it could support only one million people. Much of the land in California is desert. This land is worth nothing without access to water. So we transport water to desert areas to make land worthwhile for farming and real estate. It’s expensive, it’s politically controversial, and there isn’t enough water to go around.

How much of a crisis is this?

Today, we are 5 million acre feet short of the water the state needs for families and for farming. This shortage is only going to get worse. Climate change is reducing size of the snow pack, it will create extreme rain with flash flooding and runoff challenges, and means more drought. Almost 40 million people live in California so we need to change everyone’s habits.

We can’t have lawns and lush landscaping. 40-50 percent of our water is used outdoors. The State Water Board says three million feet of water can be saved if people simply conserve.  For example, Los Angeles has mandated low-flow toilets and shower heads.

What’s our goal for water conservation?

Our conservation goal is 20 percent urban water reduction per capita by the end of 2020 in all of California’s urban areas. Legislation was passed in 2009 to require this commitment. But conservation alone won’t solve the problem. We need to store water by capturing it. Farmers in particular can do this by adapting a variety of technologies and practices. Some examples of this are building organic matter into the soil through cover cropping, minimum tillage and amendments, using drip or micro sprinklers, soil monitoring, and many other ways. Conservation must also take place at the irrigation district level, or the watershed level, improving distribution efficiency and working on local infrastructure rather than relying on central water infrastructure with dams.

In your July 2010 publication you say it is argued that farmers ‘waste’ water. Who argues this and why?

Los Angeles wants more water allocation to water lawns and cars. As a farmer, this offends me. I’m growing food for those people to eat. [Meanwhile] people have a concept that flood irrigation is a waste of water. Really it’s the way groundwater is being recharged. Water finds its way back into the Sacramento River after its flood irrigated, so it’s a natural recycling/reclamation system. Certain crops would be very difficult to grow with drip or sprinkler type irrigation. These types of systems are expensive to manufacture, purchase and install, they require electricity to operate, and they must be maintained, so they are far from a simple solution.

How much do farmers pay for water?

Farmers pay the cost of getting water to them depending on their location. Along the Sacramento River, farmers pay $5 per acre per year. On east side of San Joaquin valley the cost is $20/$30 an acre, and West of San Joaquin water costs $200/$300 an acre. In San Diego, farmers pay $2,000 an acre. That reflects the reality of what it costs to transport water there. To be truthful, anyone paying $5 per acre doesn’t have a much incentive to conserve.

What are the top controversies re: water for food, farming and families as you see them?

When Mark Reisner wrote Cadillac Desert about land development and water policy in the West back in the 80’s, he said rice growers were wasting water.  Not about to take that one lying down, the rice farmers invited him to visit.  He worked with them to create a water fowl habitat, timing of flooding the field to work with migration which vastly increased the number of water fowl flying through. To me this is a terrific illustration of how it is possible to have agriculture conducted in harmony with nature.

What about the Delta Smelt?

For sure the Delta has crashed. We pump more and more water out of it, especially in last 10-15 years. We’ve been destroying the environment of the Delta for a long time and these indicator species along with it. But here’s the rub: if we leave more water in the delta, whose water will we leave there, Northern California’s or Southern California’s? There is absolutely no simple solution to it.

What should CA food and farming advocates do?

Advocate for water conservation, urban and rural. It’s simply not fair to just attack farmers. We must recognize that farmers are producing our food, so we must create an urban-rural compact centered on stewardship and smart use to find a way to reduce water use. A lot of farmers don’t have any economic incentives to do this, so food advocates will have to support subsidies, technical support and monies to help them. Technical assistance through cooperative extension systems have been severely cut back; that means there’s not a lot of help available for farmers.

What about industrial agriculture versus small farms?

Water is a problem that cuts across every farming operation, both big and small. The price of water has everything to do with where you are located, what your water rights are, not the size of your farm. Smaller farms have even more limited budgets, while bigger ones have more access to consultants and technologies.  Not all small organic farms are doing a great job on water use. They could do better, and they could use financial and technical help.

Here’s a good example from the Southern San Joaquin valley in the very large Westlands Water district.  These are some of the biggest farms in CA , and they’re doing a great job conserving because they have expensive water and have to work really hard to adopt high technology irrigation practices. It’s simple economics. Compare them with organic farmers in Capay Valley. They do use drip irrigation to grow vegetables, so they’re not wasting water, but don’t have sophisticated moisture probes or other higher technology tools. Plus, there’s a high learning curve since historically they’ve had enough water.

What is your final thought for water-concerned Civil Eats readers?