Kids, Most At Risk, Getting 40 Percent of Calories from Junk Food | Civil Eats

Kids, Most At Risk, Getting 40 Percent of Calories from Junk Food 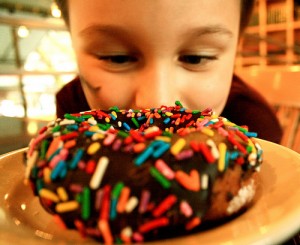 Wonder why childhood obesity is such a pervasive problem? Take a look at newly released data showing that children ages two to 18 get 40 percent of their daily caloric intake from junk foods like soda, sugary fruit drinks, pizza, cakes, cookies, donuts, and ice cream and wonder no more. That’s nearly half of their daily calories, or 800 calories a day based on a 2000-calorie diet. Call this a triumph for the food industry—a business that has mastered the art of making people eat more and more nutritionally void food—and a tragedy for our nation’s children.

Since the Nixon administration, farmers in the US have produced an additional 500 calories per person per day, which left the food industry with a huge problem–or as they saw it, a huge opportunity: how to entice people to eat more than they need to every day. They’ve accomplished this by engineering foods so that cheap, non-nutritious calories can be packed into highly-addictive processed foods, creating the perfect recipe for a public health disaster.

In research done on rats, one study found that overconsumption of high-calorie foods can create addictive responses in the brain. These foods were also found to turn rats into compulsive binge eaters. A similar response in humans is amplified by the fact that we are programmed to eat more than necessary to survive. Researchers call this trait the “thrifty gene.” Our hunter-gatherer ancestors ate as much food as was available in order to survive—those who fattened up while times were good survived when times were bad. But this trait has become a problem in modern society where the opportunity to overeat always exists and the cost of highly caloric junk foods is extremely low—much cheaper than fresh, whole foods. In fact, these sugary and poor-quality fatty foods are the cheapest foods you can get, thanks in part to subsidies on things like corn, soybeans, and wheat, which make up a large portion of many processed foods.

Add to these food-engineering feats, the genius of marketing. Advertisers have made it their business to know how young children perceive the world and then create junk food packaging designed for maximum appeal, according to Anna Lappé, author of Diet for a Hot Planet. Lappe writes, “Children, research has shown, respond most to longer-wavelength colors, like reds, yellows, and oranges. What colors do you think are featured most prominently on sugary-cereal boxes?” Not surprisingly, a cereal box like Trix is bright red. Unfortunately, so is the cereal.

The General Mills Web site boasts: “There’s nothing silly about the nutrition in Trix cereal.” This is true. The second ingredient is sugar and a one cup serving has 11 grams; not to mention the Red 40, Yellow 6, Blue 1, the ever-mysterious “artificial flavor” and the preservative BHT, which has been linked to hyperactivity in children and is suspected of being a possible carcinogen. Despite all of this, the front of the box reads: “Whole Grain & Calcium Guaranteed.”

Meanwhile, those 11 grams of sugar equal more than two and a half teaspoons per serving. While there are currently no limits on how much sugar a child should consume in a day (curious though that is) the American Heart Association (AHA) recommends that an adult woman consume no more than 6 teaspoons of added sugar a day. If we assume that the average child is about half the weight of an adult woman, that means one serving of Trix cereal is the upper limit of how much sugar a child could safely consume in one day. Problem is, that’s only breakfast. The AHA found that the average teen eats 34 teaspoons a day.

These sugary cereals are aggressively marketed to children, more so than more nutritious cereals, another recent study found. The long-term consequences of starting kids on sugar-laden and artificially flavored foods is that it taints their palates, making it harder for them to appreciate the flavors of whole foods. Researchers at the Rudd Center for Food Policy and Obesity say that children will eat unsweetened cereals if they are offered it. “There are ways to train kids to eat healthier food, it’s all about what they’re exposed to,” one author of the study told ABC news.

This brings to mind a little-known study Nina Planck writes about in Real Food for Mother and Baby conducted by a pediatrician named Clara Davis in the 1920s and 1930s. She wanted to see what babies would choose to eat if a variety of whole foods were laid out before them, without any outside pressure telling them what to eat or not eat. After an analysis of more than 36,000 meals, Davis found that the babies ate a varied diet, were well nourished, and were not picky about the foods they were eating. Most interestingly, the babies seemed to have an innate knowledge of the foods they needed to thrive. A nine-month old with rickets drank cod liver oil until his rickets was cured and then stopped drinking it. One baby ate seven eggs a day, another had four bananas, one ate mostly bone marrow, and another regularly drank a quart of milk with lunch. None of the babies suffered stomachaches or other distress, and the meals the babies chose remedied their nutritional deficits.

As fascinating as this study is, we have to wonder what would happen if junk foods were also laid out before these babies—or maybe we don’t? In cultures where American junk foods have come to replace traditional diets, rates of obesity and chronic illness soar. But if we ensured that all children had access to real, whole foods and if these foods were encouraged and marketed with the same fervor as junk foods, then perhaps we would be seeing much different statistics than the very frightening ones we’re seeing now.

This is the third piece in a regular column by holistic nutrition expert, Kristin Wartman. (The first piece is here, the second is here.) She will examine food, nutrition, and the way the industrial food industry affects our food system and our health.