A Farm Grows in an Empty Lot in Brooklyn | Civil Eats 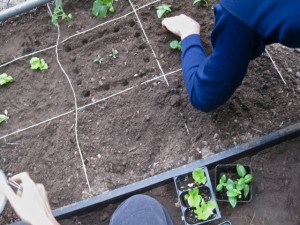 When Brooklyn homeowner and Hunter College urban studies professor Tom Angotti thought about how he could make a difference in his community, he decided to start with his overgrown corner plot. Little did he know he’d be at the helm of a volunteer movement that’s working to make a difference in the way we think about food, community, and what it takes to democratically run a major project comprised of individuals holding various opinions on urban agriculture.

How does one go about growing a farm? How can a seed of an idea that a rocky overgrown junk pile corner patch in Brooklyn transform into a viable Community Supported Agriculture farm? Perhaps it helps to be an experienced community planner like Tom.

It all started on the local Windsor Terrace/Kensington list-serve, announcing on March 28, 2010 that Tom and his wife Emma would like to invite the community to convert his plot of land into a community farm. Word reached as far as Manhattan, and a regular crop mob of more than a hundred people showed up from neighborhoods near and far.

Urban foodies, farmers, and ecological communities are cropping up more and more, with rising passion and idealism about food—and all the issues that surround it. Concerns about food safety and costs are not new, and the farm project has attracted numerous people who care about addressing these issues, including members of organizations such as the Park Slope Food Coop, Just Food, Brooklyn Botanic Garden, and New York University.

Since the inaugural groundbreaking, Prospect Farm has rooted into a community project, with a mission of producing local food as an alternative to industrial food—with diversity in both food production and membership. But even before future crop growers (and eaters) could think about what kinds of things to grow and where and how there was the issue of taking a hard look at what was underneath all that land and cleaning up what had long been buried there.

The soil was tested and found to have high levels of lead and other heavy metals—typical of most Brooklyn soil near streets and highways. So improving the soil began. First, we dug out concrete rubble, rocks, floor tiles, furniture frames, and 1970s-era cans with peel-off pull tabs. Then we started to make new soil. From there, the community composting project got underway, collecting neighbors’ food scraps to create enough compost to turn over into the soil, plot by plot. Not unlike an archeological dig, volunteers carved out huge holes in the land, sifted the soil, and filled the cavities with layers of food compost, horse manure from the local stables, newspaper, brown compost (leaves), and sifted dirt. 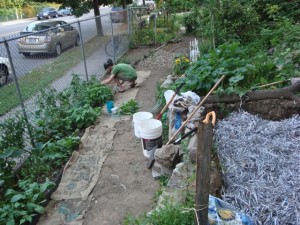 Meanwhile planting plans continued. As some volunteers worked plots for planting in 2011, others prepared several smaller plots for immediate planting for harvest this summer and fall. Peter Kelman, experienced urban gardener, guided the farm’s first plot managers in the square foot gardening method for maximizing production in limited urban spaces as well as best practices for plot management and planning. The results (that didn’t get eaten) have been sent to a science lab at Brooklyn College to teach us more about the soil and what is making its way into what we grow in it. Some products known to take up minimal amounts of heavy metals were eaten by some of the growers, but with precautions not to feed them to children. Many, including those known to absorb heavy metals, were disposed of.

Thus Prospect Farm is working to both remediate the soil and grow food; because this will take some time it will be “slow food” in more ways than one. The intent is to make Prospect Farm a living public model and teaching tool; to make public the Soup to Nuts of it all. This includes periodic testing of the soil—as well as what grows in it—and posting results; working with expert composters and involving the community in soil reclamation; reaching out to master gardeners and local scientists who’ve had great success with square foot gardening methods for urban settings; connecting with local residents, businesses, schools, and organizations such as the Brooklyn Food Coalition and other groups involved with food sustainability and food justice initiatives.

Ultimately, as much as Prospect Farm can and does grow in Brooklyn, a farm needs hands—and regular care. As it grows, the farm faces the reality of labor needs, organization, outreach, plot maintenance, expenses, materials, and seeds. The hope is that by digging into the issues that we care about and getting our hands dirty, even if we don’t solve all the food problems as we see them, at the very least we can change what we know and how we think about food.

Participation is open to all and welcome. Got food scraps? Bring them for composting Wednesday and Sundays 6 to 7 p.m. Come see what’s shaping up at the farm, located at 1194 Prospect Avenue, between Seeley and Vanderbilt Streets. You can find out more about the farm and how to get involved at www.prospectfarm.org. And save the date: October 30 beginning at 11 a.m. the farm is kicking off its first annual Harvest Fest and Soup Cook-Off, with games, music, and food-a-plenty.

Monique is a writer and producer of books, film, and new media content. She has been a broadcast journalist in Napa Valley, Editor-in-Chief at DivineCaroline.com, and authored and and edited several titles on film, science, food, sports, and culture. Most recently, she has developed and produced film and television productions about incarcerated pregnant women, urban sustainability, maternal health, and modern parenting. Read more >