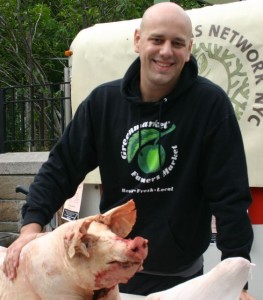 If you want to know what a large-scale locavore meat festival looks like, start with the organizer buying whole pigs directly from a farmer and distributing them to participating chefs. This caused quite a spectacle when Paul Dench-Layton of Violet Hill Farm delivered 61 of his (and a neighbor’s) piglets to the Union Square Greenmarket. Chefs posed with their pigs for a photo op, leaving no question as to the provenance for the local pork festival Pig Island. Additional pork came from Tamarack Hollow Farm, The Piggery, and Mountain View Farm. When approximately 2,000 people arrived on Governor’s Island this past Sunday, they found everything from pork bone tea to pork croquettes on cocoa bread cooked by some 20 chefs. Every chef’s station had a sign stating the farm from which the pork came.

This summer I wrote about Meatopia, the meat festival where intentions to showcase locally-raised meat fell woefully short. Chefs were handed contact information for several local farms, but most ordered from their usual large-scale distributors. The event raised questions about why creating a robust regional food system remains beyond our grasp and how much work it will take to get there. But as I was writing the post, Meatopia Co-Chair and Executive Producer Jimmy Carbone was planning an entirely different kind of meat festival, and this time he was so determined to guarantee transparency and small-farm sourcing that he decided to do all the pork purchasing himself.

Carbone, host of the meat CSA The Piggery at his pub Jimmy’s No. 43, came up with the idea for a local pork festival because of his desire to spotlight the farmers he has gotten to know and to help broaden their market. “It’s almost more important to just buy from farmers than to give to a charity,” Carbone says. “It has a direct impact.” (Pig Island was a double-win in this regard, since Food Systems Network NYC was the charity partner of the event.) The New York City market can mean larger profit margins for upstate farmers, who typically get lower prices for their food when they sell within their own  communities. But if processing and distribution costs are too high those profit margins can shrink considerably.

This is the dilemma Violet Hill farmer Denton-Lynch is facing. His usual processor, located about 80 miles from the farm, is no longer USDA certified. This means if he wants to sell his pork (and goat, chicken, and lamb) retail he has to truck them to the next-closest USDA plant, some five or six hours away. The trip is too cost-prohibitive unless he’s processing a larger order, like the 61 pigs for Pig Island.  “It’s horrible. It’s actually the biggest problem most small farmers face, for the ones raising animals, anyway, is finding a place where they can process A) legally and B) well.”

While Pig Island delivered a financial Hail Mary pass for Violet Hill Farm, Denton-Lynch also hopes it raises awareness of some of the issues farmers face, like the processing problem. “If there was some way of having political influence on how small farmers are struggling and maybe adjusting some of these [food safety] rules, it would be fantastic. Even to reasonably debate it. A lot of the rules make perfect sense in a place that processes 500 or 1000 animals a day.”

Food Systems Network NYC was at Pig Island working to deliver that message and other important foodshed issues to attendees. They distributed fliers that included information about the 2012 Farm bill, Food Safety Modernization Act, and a bill currently stalled in the NY State Assembly that would finance transportation and distribution of NY farm-grown products to food service markets, among other food policy issues. 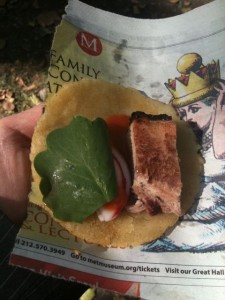 But of course, most people came to Pig Island for the food. The longest line was for the pork tacos with habanero-peach salsa at Palo Santo–longest partly because the tacos really are that good, but also because the tortillas were being made by hand, one by one. Chef Jaques Gaultier roasts a whole pigs at his Brooklyn restaurant regularly. His inspiration is comida crillolla, the home cooking of Latin America, which uses the whole animal. “You’ve got a cuisine that was created by people who often raised their own animals,” so every bit of the animals are used, Gaultier said.

“Cooking nose-to-tail is a fun challenge for chefs,” says Chef Heather Carlucci of Print, who served maple bacon sticky buns featuring bacon for Mountain View Farm. Thanks to forager Johanna Kolodny, almost all of the food served at Print comes from nearby farms, and Carlucci visits every one of them.

I Trulli chef Patty Jackson doesn’t usually buy whole, local pigs (though she buys rabbits, goats, and lambs from the Greenmarket). “It really takes a dedicated effort to deal with four whole pigs,” she says. “I just don’t have the space.” But for Pig Island she turned out one of my favorite bites, a beautiful tile-like head (and trotters) cheese and sausage.

Changing the palates of New York City diners is just one approach to growing a regional food shed; getting people engaged in policy is another crucial, yet more difficult approach. Food Systems Network NYC is seeking to do just that, shifting from a networking group for food organization professionals to one focusing on public awareness and education. Its newly-formed public policy committee [full disclosure, I have participated in this committee] created the info handouts for Pig Island about community gardens and legislation currently impacting regional NYC food.

Was the message getting through to attendees? “We came for the food,” says L, an attendee at Pig Island who hadn’t been aware that the pork was all locally sourced. Most other people I spoke with did know about the local farm connection and considered it part of the new food ethics they consciously participate in.

As for the animal-eating aspect of food ethics, one guest expressed her opinion on eating meat: “I think about it [meat, sustainability, ethics] a lot and I feel guilty about it, but also I would say that eating is my number-one pleasure in life so it’s hard to argue against that ‘cause I would find life a lot less worth living. It’s a very big internal conflict for me.”

There’s no internal conflict over raising livestock for meat for farmer Dench-Layton. He has began farming ten years ago when he was diagnosed with stage four Hodgkin’s lymphoma. It’s been a rough ride, but he, his family, and his farm have survived. “Farming is good for your soul. If you really looked at it for work, it’s insane hours for very low pay, when you look at it as a way of life, and the things we do that we thoroughly enjoy, it’s doesn’t really feel like it’s work.”

Farmers do not usually have the opportunity to attend weekend events like Pig Island because they’re working at the farm or the market, but Dench-Layton and his three children were at the festival, enjoying the sight of throngs reveling in the fruits of his labor. This was particularly satisfying for Carbone. “For a long time chefs have been the stars. That’s still the case, but farmers have got to be the stars, too. We don’t know the stories of most of the people growing our food.”