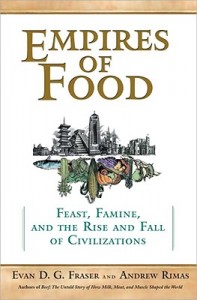 I spend a great deal of my time on extremely small-scale food production.  Growing, procuring, cooking, eating, and writing about locally produced food is my bread and butter.  Thus picking up a copy of Empires of Food: Feast, Famine, and the Rise and Fall of Civilizations was in some ways a departure for me.  Authors Evan D.G. Fraser and Andrew Rimas are examining a world that looks to me much the same as the Grand Canyon must look to a mouse.

Culinary history is a truer history though than almost any taught in schools.  Most of what we were taught in high school or even college was little more than the chronology of war.  You may remember that the Norman Conquest occurred in 1066, you probably don’t know about the advances in agriculture that resulted from it, like the invention of the moldboard plow.  The authors suggest that this one innovation might well rank alongside the wheel or steam locomotion in terms of its importance to human development.

Across 12,000 years of history, Empires of Food lays out in clear and compelling terms the ways our world has been shaped by the repeated, head-on collision between politics and the production, transportation and consumption of food.  We learn how the Romans knew of the effects certain vitamins had on health and strength even if they didn’t know what the vitamins themselves actually were; how the ancient Chinese were ahead of even today’s methods of seed selection; of the inescapable importance and value of clean, fresh water.

They put some emphasis too on the flaws in our modern food systems and our seeming inability to learn, as a species, from our own checkered past.  “We devote much of our earth to a very small number of crops.  But instead of relying on prayer, dung and ditches to coax out a harvest we use machines, chemicals, and satellite-guided sprinklers.  The results overflow our silos, our supermarket shelves, and our waistbands.”  It is hard to tell whether the feasts of our current forms of agriculture will lead first to famine or death by excess.

All of this is fascinating, instructive, and vitally important.  But where they are most enlightening  is at the end, in a conclusion titled “The New Gluttony and Tomorrow’s Menu.”  They rail against those who consider food as fashion – what Carlo Petrini described as “wearing produce like jewelry” as people promenade through trendy, shop-to-be-seen markets.  The true threat though is not pop culture, it’s oil-addicted agriculture.  We worry about the effects climate change will have on shorelines and even in our fields, but we pay very little attention to the fact that when the oil runs out (and it will run out), the current food empire run by the likes of Monsanto, ADM and ConAgra will face a 50% loss in fertility and 170 million more empty mouths to feed.

This is what Slow Food proponents and other food activists mean when we say that what we have is not a sustainable food system.  What we must work toward is one that is Good, Clean and Fair.  By Good we mean that the food is good tasting and good for you.  By Clean we mean that it is not polluted and does not pollute – that there is nothing in the food that isn’t food (and if it wasn’t food 100 years ago, it isn’t food now).  And by Fair we mean that the people who produce the food should be justly compensated for their labor. That would be a sustainable food system.