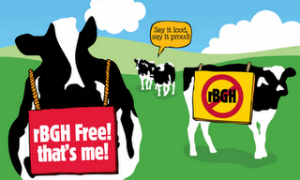 Remember way back when when several states tried to ban “rbGH-free” claims on dairy? This was a few years ago now. Monsanto, who owned rbGH at the time, helped found a group of rbGH-loving dairy farmers called AFACT. AFACT then pushed to ban any label claims telling consumers which milk came from cows that had not been treated with rbGH. Naturally, that sparked tons of consumer outrage, and ultimately AFACT was unsuccessful in most states where they tried this.

Save for Ohio. Ohio was the one last state where it looked like they might win. Ultimately the fight went to the courts. But yesterday brought BIG news of a court decision in Ohio. The less significant news out of the court is that milk in Ohio can still say “rbGH-free” but it must also contain an FDA disclaimer saying “[t]he FDA has determined that no significant difference has been shown between milk derived from rbST-supplemented and non-rbST-supplemented cows.”

Now, here’s the BIG news. The court challenged the FDA’s finding that there is “no measurable compositional difference” between milk from rbGH-treated cows and milk from untreated cows. According to those who have worked on this issue for nearly two decades now (maybe more), the FDA’s claim that there was no compositional difference between milk from rbGH-treated and untreated cows was THE MAJOR roadblock to any good regulation. And the court finally struck it down, citing three reasons why the milk differs:

Below, you will find the exact language of the court’s ruling. The testimony submitted to the FDA’s Veterinary Medicine Advisory Committee all the way back in 1993 by Michael Hansen, Senior Scientist at Consumers’ Union can be read here. Amazing how it only took 17 years to get the truth legally recognized.

The district court held that the composition claims were inherently misleading because ‘they imply a compositional difference between those products that are produced with rb[ST] and those that are not,’ in contravention of the FDA’s finding that there is no measurable compositional difference between the two. This conclusion is belied by the record, however, which shows that, contrary to the district court’s assertion, a compositional difference does exist between milk from untreated cows and conventional milk (“conventional milk,” as used throughout this opinion, refers to milk from cows treated with rbST). As detailed by the amici parties seeking to strike down the Rule, the use of rbST in milk production has been shown to elevate the levels of insulin-like growth factor 1 (IGF-1), a naturally-occurring hormone that in high levels is linked to several types of cancers, among other things. The amici also point to certain studies indicating that rbST use induces an unnatural period of milk production during a cow’s “negative energy phase.” According to these studies, milk produced during this stage is considered to be low quality due to its increased fat content and its decreased level of proteins. The amici further note that milk from treated cows contains higher somatic cell counts, which makes the milk turn sour more quickly and is another indicator of poor milk quality. This evidence precludes us from agreeing with the district court’s conclusion that there is no compositional difference between the two types of milk. In addition, and more salient to the regulation of composition claims like “rbST free,” the failure to discover rbST in conventional milk is not necessarily because the artificial hormone is absent in such milk, but rather because scientists have been unable to perfect a test to detect it. [emphasis added]

Jill Richardson is the founder of the blog La Vida Locavore and a member of the Organic Consumers Association policy advisory board. She is the author of Recipe for America: Why Our Food System Is Broken and What We Can Do to Fix It. Read more >