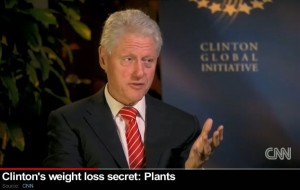 The former President told Blitzer that he mostly eats beans, legumes, vegetables, and fruit and takes a protein supplement in his morning fruit and almond milk smoothie. Clinton underwent a quadruple bypass in 2004 and had two stents put in this past February after learning that one of his bypassed arteries was blocked again. While many commentators are hung up on his dramatic weight loss and the debate about the nutritional value of veganism, they are missing the most important story: Clinton’s change from a life-shortening Standard American Diet (SAD) to a plant-based diet of whole foods.

The SAD is loaded with sugar, trans-fats, refined carbohydrates, additives, chemicals, pesticides and hormones, while being basically void of fresh fruits, vegetables, and other whole foods. One of the many problems with the SAD diet is that it will eventually catch up with you. As part of the aging baby-boomer generation, Clinton is one of many dealing with a chronic condition or a health scare and looking for alternative diets or complements to medications to help reverse the damage.

Most Americans aren’t eating anything close to a plant-based diet, and are instead consuming large amounts of processed and packaged foods. In their most recent study, the Centers for Disease Control and Prevention found that only 26 percent of the nation’s adults eat vegetables three or more times a day. As a result, the SAD is typically nutrient and mineral deficient and has contributed to one third of the population being obese or overweight. It is also at the root of chronic diseases and conditions like heart disease, diabetes and many cancers. As contradictory as it may seem, many overweight people are also nutrient starved, and one theory holds that this is due to the fact that our bodies drive us to overeat when the foods we’re eating are not supplying us with the nutrients we need to thrive.

This is why it’s important to remember that what you don’t eat is just as critical as what you do eat, and when you stop eating junk, as Clinton has done, you’re bound to start eating whole foods. While I don’t know exactly what Clinton is eating, if he truly is eating a plant-based, whole foods diet, then there are several harmful ingredients being left out of his menu: high-fructose corn syrup, or refined sugar of any kind; trans-fats or other poor-quality oils; and refined flour products, like white bread in all of its forms. These are the real culprits behind obesity, elevated cholesterol levels and a host of chronic health conditions. And since Clinton was notorious for his love of junk food, sweets, and fast-food (in fact, Saturday Night Live even performed a skit about it), it’s no wonder that by cutting all of this out, he’s lost weight and feels better.

It’s nothing ground-breaking, or rather, it shouldn’t be. Eating healthy foods is not mysterious or all that hard. It’s just not what you see advertised on television and it’s not what you’ll see in the supermarket (unless as Michael Pollan has advised, you only shop the perimeters). Processed foods and beverages have become so commonplace that people often don’t see them for what they truly are: chemicals and additives masquerading as food. On top of this, big food companies are actively misleading the public through advertising, and as a result most people think processed, artificial food substances are actually real foods—and sometimes they believe they’re healthy foods too.

Kellogg’s was recently slammed by the Federal Trade Commission for making false claims about not one, but two of their cereals. They first claimed that their Frosted Mini-Wheats were “clinically shown to improve kids attentiveness by 20 percent.” Turns out that wasn’t true—big surprise! Then for the second time this year, they were reprimanded for claiming that Rice Krispies “now helps support your child’s immunity” and “Kellogg’s Rice Krispies has been improved to include antioxidants and nutrients that your family needs to help them stay healthy.” The bottom line is to be wary of any food that comes in a package and steer clear of foods for which advertisements or health claims are made. Even many so-called “health foods” are equally processed and are often just as harmful as junk food. You don’t see corporate ad campaigns for bunches of kale or spinach and there’s no ingredient list to read on the bulk bin of steel cut oats. You can be assured that these are whole foods with no agenda behind them.

Clinton’s shift in thinking about the foods he eats seems to be indicative of a greater movement underway. Although his change was born out of necessity, we can only hope that he will serve as a role model to others hoping to avert catastrophic events like bypass surgery. The more Americans who understand the connection between their diet and their health, and who can see behind the insidious claims the big food corporations make, the better off we’ll be as a nation. We need to shed extra weight, become more healthy, and rely less on a food industry that clearly doesn’t have our best interests in mind.

Clinton with Wolf Blitzer on CNN:

This is the second piece in a regular column by holistic nutrition expert, Kristin Wartman. (The first piece is here.) She will examine food, nutrition, and the way the industrial food industry affects our food system and our health.