Is The Food Network About To Go Locavore? | Civil Eats

Is The Food Network About To Go Locavore? 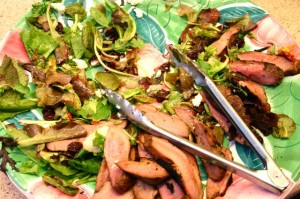 What if you were watching Chopped and you saw Ted Allen unload a bushel of Kiwi Berries from Kiwi Korners Farm in Danville, PA? Or if Ina Garten featured Lola ducks on her show and started raving about Hudson Valley Duck Farm? Don’t hold your breath quite yet, but executives at Food Network are pondering the prospect of sourcing from local, mid-sized farms for their studio kitchens and events. For such a high-profile entity, this move could help bring the sustainable food movement to the tipping point–depending on how Food Network spins it.

But before Food Network jumps on the locavore bandwagon, they must put one key part in place: the un-sexy locavore bugbear, “distribution.” A company like Food Network is used to sourcing most of their food from big distributors that can ship 20 pounds of tomatoes from Chile (in the middle of January), so the idea of buying from local, mid-sized family farms in the Northeast may seem like an unthinkable, logistical nightmare. This is a corporation that can get an egg delivered at midnight, after all. Here’s where Debra Italiano, Red Tomato, and Regional Access come in to stop talking about ideals and to start making things happen.

Red Tomato is a non-profit organization that connects farmers and consumers through marketing, trade, and education. They focus on the logistics behind making locally-based, family-farm, and ecological and fair trade food systems financially viable. Regional Access is a New York State-based distributor founded 20 years ago by organic farmer and entrepreneur Gary Redmond. Regional Access boasts a catalog of more than 5,000 New York-produced specialty and natural foods.

Together with some additional colleagues, George Gosieski and Lauren McGrath (who has had a hand in Ricks Pics, Foodshed Market, Harlem Harvest Festival, and Pig Island), Italiano has formed the Food Supply and Distribution Systems Initiative which is a social enterprise (i.e. corporate responsibility) organization that is creating a distribution and logistics template for corporate stakeholders interested in supporting food system security. In other words, FSDSI is hoping to help corporations (and institutions like hospitals and universities) plug into the sustainable food movement–and Italiano eventually wants to scale the FSDSI model nationally to support regional food systems everywhere.

It just happens that Italiano has collaborated on other sustainability initiatives with Mory Thomas, head of culinary product development at Food Network. Italiano shared her vision of Food Network becoming an education and media partner, and eventually Thomas invited Italiano to organize a luncheon at Food Network’s studio kitchen. 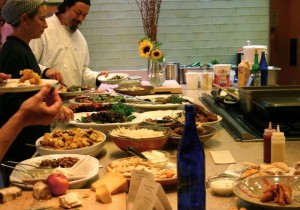 Italiano spelled out the mission for everyone:

“If what we get to do is build up a critical mass, if there’s more consuming of the right stuff…if healthier, natural, organically-grown food is in demand and we create a system where we’re demanding that to happen, the system is going to respond with higher levels of that kind of food. It will create a critical mass where we can actually lower food prices, maintain farmer’s markets–and this is critical because these people are not being taken care of–so that we create a triple win: a win for businesses, a win for the farmer, and a win for everyday folks like you and me. We will create more corporate stakeholders in the system.”

According to Executive Chef Robert Bleifer, Food Network already does a bit of local sourcing–that is, when the stars align. Producers largely determine what foods are cooked for the shows and aren’t always thinking about seasonality and a regional value chain story when they plan a series. Sometimes shows are produced a few seasons ahead, making local and seasonal sourcing nearly impossible. Still, the Food Network purchases from the Union Square Greenmarket whenever they can and Bleifer himself is open to going deeper. In fact, the network has a little more wiggle room than restaurants do when it comes to pricing. While costs would still have to be reasonable–and every expensive heirloom tomato would have to be justified by its narrative value–Bleifer is optimistic about the possibilities.

Meanwhile, Italiano’s team has set up an account for Food Network, and Regional Access and Red Tomato are ready to deploy their system as soon as Food Network says “go.” The team is hoping to collaborate on network-sponsored special events in particular.

But let’s go back to Ina Garten and her Hudson-raised Lola duck. Italiano doesn’t just want Food Network to walk the walk–she wants them to engage in viewer education. Will viewers watch Ina’s show and wonder what kind of fabulous livestock is being sustainably raised near them, say in St. Louis? Or will they start calculating how much it’ll cost to ship Ina’s ducks half-way across the country? Once producers find ways to enhance the entertainment value of educational messaging, are viewers really going to be influenced? Or will it come across as more aspirational fantasy? 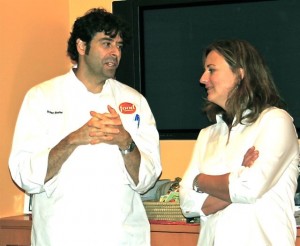 “Look at what the Food Network has done to the cooking world,” Chef Bleifer says. At one time, home cooks were lucky if they could find some parsley and mint at their local grocery store. “Now,” Bleifer adds, “there’s this amazing variety of herbs available everywhere.” Bleifer credits Food Network for changing food culture in America to the point of changing the supermarket landscape. “Even if a chef influences just five percent of an audience, that’s still a lot of people.” Considering the 36 million eyeballs trained on season six of The Next Food Network Star, five percent is still over a million people. Maybe the next Food Network star could be a farmer.